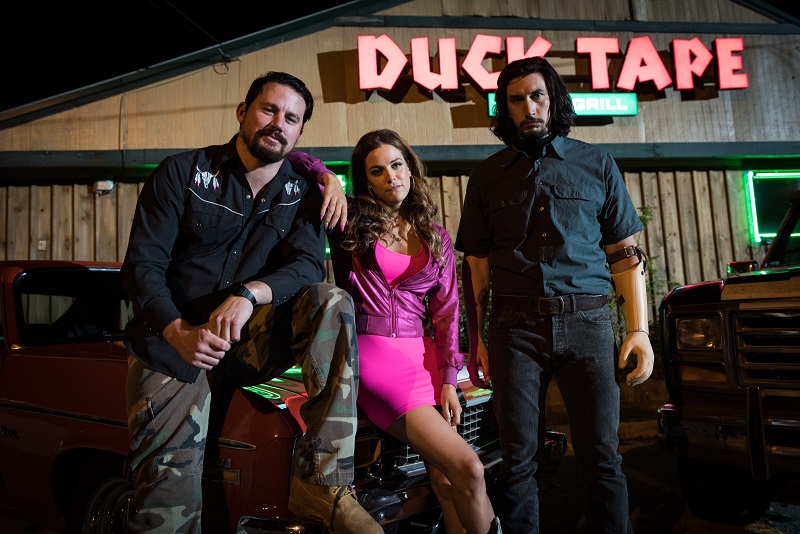 Early on in Logan Lucky, the camera lingers on a single piece of paper that Jimmy Logan (Channing Tatum) has pinned up on the wall of his trailer. It details, in 10 steps, how to rob a bank. Step 1 is “decide you’re going to rob a bank,” two of the steps are “shit happens” and the last one is “know when to cut your losses and walk away” or something to that effect. (I have many talents, but taking legible notes during movies is not one.) It’s a funny sight gag that becomes a plot element later on, but it also describes, in some way, Steven Soderbergh’s career.

Having “retired” in 2013 due to dissatisfaction with the direction the business was going (but still having done more in those three years off that I can even imagine accomplishing for the rest of my life), Soderbergh returns to the silver screen with the attitude of a man who has already robbed a bank, gotten away with it and is only now starting to understand what all that loot can be used for.

Soderbergh’s made movies like this before, of course: all three of the Ocean’s Eleven movies are heist movies in very much the same way Logan Lucky is, and he’s made comedies in this sort of sphere before. But the abandon and the slack, good-natured sense of humour that Soderbergh brings to Logan Lucky is refreshing both within his oeuvre and out of it.

Jimmy Logan loses his job on a construction crew due to a pre-existing condition. Faced with financial peril, he calls upon his disabled-veteran (he lost part of an arm in Iraq) bartender brother (Adam Driver) to help him with an unusual caper. Using knowledge from his old job (fixing sinkholes underneath an enormous raceway), they’re going to break into the underground system of pressurized tubes that take cash into a vault, thereby getting their hands on all of the cash made by this stadium (which has its own police force!) in one day. In order to get into the vault, however, they need the help of an expert safecracker named Joe Bang (Daniel Craig) – who just so happens to be serving time when they need him.

It would be easy for Soderbergh to make these broad caricatures of hayseeds – MAGA-capped Duck Dynasty motherfuckers – worthy entirely of our contempt. That’s not how Soderbergh works, however, and his depiction is part hat-tip to the good-natured rednecks of Burt Reynolds movies from the ’70s and part celebration of everyday American middle-of-the-roadness – its characters are never really cool, dressed in $7 short-sleeved button-ups and camo shorts, but they feel a million miles away from the caricatures they may look like in the marketing.

What’s perhaps most surprising about Logan Lucky is how precise and efficient it is. Though the humour is good-natured and the pacing feels slack, the screenplay (by Rebecca Blunt, who may or may not be a real person based on the fact that Soderbergh often uses pseudonyms when he takes on a non-directorial role in a movie – and also based on the fact that no one involved in the production has apparently ever seen her) is a marvel of efficiency with nary an ounce of fat to be found. It’s a pretty traditional heist movie (a daughter’s dance recital coinciding with an important moment in the heist even factors into the plot) and yet Soderbergh manages to build it with such skill and efficiency that even my blasé ass got blindsided by its various twists and turns. Even its most expendable aspects (a British energy-drink mogul played by Seth MacFarlane who has physical encounters with the Logans throughout the film, the wispiest of love-interest subplots featuring Katherine Waterston as a travelling nurse) feel necessary and organic.

There’s something a little Coen-y about Logan Lucky – particularly in the florid, meticulous delivery of dialogue from Driver and Craig, not to mention the third act appearance of a couple of determined FBI agents played by Hilary Swank and Green Room’s Macon Blair – but it’s mostly on its own wavelength, dipping into slapstick and absurdism while remaining incredibly tight and razor-focused in its genre elements. It’s unfortunate that the film is coming out this week with all that’s happening, because it’s pointedly not the Lynyrd Skynyrd/The South Will Rise Again horseshit that you may construe from a hillbilly heist movie set during a Nascar race. While I wouldn’t call it inherently political, it does dress a more nuanced portrait of the much-maligned flyover states that they would even care to admit themselves.

Soderbergh has said that his “comeback” won’t involve any of the experimental or difficult films he’s made in the past – he’s a populist now, apparently. For as much as I love some of Soderbergh’s weirder films, I always thought he worked best in this type of situation. He brings nuance, detail and a lived-in patina to a movie you’ve already seen before, but he makes that movie almost better than you even thought it could be. ■