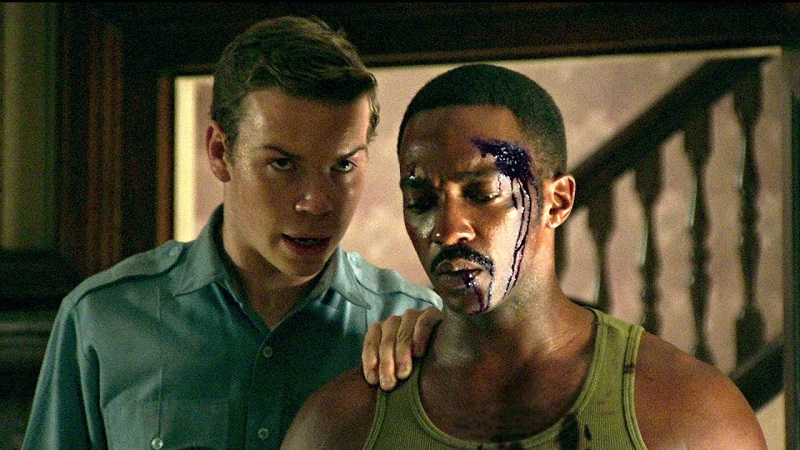 Will Poulter and Anthony Mackie in Detroit.

Let me begin by saying this: I do not see any reason why Kathryn Bigelow, being white, should not have made Detroit. I can’t pretend to know what a black filmmaker would have done differently, and I cannot posit what every single alternative take on this story could possibly have looked like.

What I can say without a doubt is that Kathryn Bigelow is not angry enough to make Detroit. The story of what went down at the Algiers Motel is powder-keg stuff, even 50 years later — it is something befitting anger and rage. Neither of those are qualities that Bigelow’s filmmaking possesses. Her thing (or at least her thing since The Hurt Locker) is deconstructing imprecise chaos with surgical precision, weaving together points of view in a way that’s both political and apolitical. Bigelow has a tactician approach to filmmaking, which is theoretically fine, but not entirely suited to the task at hand.

Detroit, 1967. Detroit PD shuts down an unlicensed bar (known as a blind pig) with predominantly African-American patrons and their rough treatment — in plain view of the public — soon sets off a rash of riots that lasts for days. The city continues to exist under this controlled anarchy; life continues, somehow, as tensions flare. Larry (Algee Smith) is the singer in an R&B group whose big break is interrupted by the riots. Seeking shelter from the riots, Larry and his friend Fred (Jacob Latimore) wind up at the Algiers Motel, where many other young African-Americans are staying, seemingly (or perhaps purposely) unaware of the goings-on outside.

Later in the evening, another patron of the hotel (Jason Mitchell) fires a starter pistol out the window, immediately drawing the attention of law enforcement outside. A trio of scummy Detroit patrolmen (Will Poulter, Ben O’Toole and Jack Reynor) soon lead state police and National Guardsmen into the motel, shooting the young man dead and terrorizing the other patrons (including a war vet played by Anthony Mackie and two white women) until one of them reveals what happened to the gun. What begins as a brutal “interrogation technique” soon turns into straight-up torture by racist, power-hungry cops.

It’s a difficult story to tell by any stretch of the imagination — there has never been an “official” version of the events agreed upon by anyone, and Bigelow has to rely on constantly shifting viewpoints in order to tell the story fully. That means that Detroit doesn’t really have a lead character, an interesting choice that nevertheless proves to be one of the film’s major flaws.

The audience surrogate, I think, is meant to be the character played by John Boyega — a security guard tasked with guarding a grocery store nearby who gets wrapped up in the proceedings. As both an authority figure and an African-American man, Boyega’s character is meant to represent both sides of the divide. In reality, though, his character is fairly external to the action (there’s really no way to neatly fit him into even the synopsis, since he more or less just tags along with the cops), and Bigelow’s attempt to give everyone’s perspective a fair shake means that the character intended to bridge the two feels more like a device than a real person.

Bigelow has a somewhat journalistic, stick-to-the-facts approach that means she attempts to avoid depicting the villains as purely evil, but she also seems to think they’re purely evil, which is confusing. Though thinly sketched (Reynor’s character, in particular, is meant to be the sort of wide-eyed innocent for whom excessive power is a mortal curse, which translates to him spending almost every scene gawping dumbly at everything happening around him), the cops take a lot of screentime away from the ostensible lead characters without ever really seeming like the movie is trying to see where they’re coming from. It wouldn’t be in the film’s best interest to try and humanize them, but what it does instead is perhaps clumsier: it’s almost as if it acknowledges evil but politely declines to explore it.

The whole middle section of Detroit takes the form of a horror movie in the Don’t Breathe vein, leaning heavily on genre tropes to depict the proceedings. What’s happening is fucked up and disturbing enough to affect the audience without also somehow making it seem like the terrorized have a chance to turn the tables on their oppressors. They don’t — this isn’t that kind of story, and it’s more than a little cheap that Bigelow uses these conventions to manipulate the audience in that way. The material may anger Bigelow and the film’s screenwriter Mark Boal, but there’s a bizarre sense of removal to the proceedings. When you’re talking about real black men who really were murdered by racist white cops, it seems a little off to also lean on the “don’t go in there!” mode of filmmaking.

Detroit is intense and disturbing and certainly engaging enough to make an impression on even the most blasé of viewers. For all of the ethical dilemmas I may have with Bigelow’s tactician style, I have to admit that it is effective beyond measure. The performances are strong and the film avoids trading in excessive shorthand, but I’m still not convinced. Detroit is an intense film, but a resoundingly polite one. It’s hard not to wonder what Spike Lee, Ava Duvernay or Ryan Coogler may have done with the material – except that they’ve already done their versions of this. We shouldn’t expect black filmmakers to trade entirely in tragedy, but anyone who does should be angry. Angrier than Kathryn Bigelow, certainly.

Detroit is a complex case of a highly imperfect movie. Its flaws are so tightly woven into its DNA that it’s hard to imagine a different filmmaker’s take not having a form of them as well. It’s nearly impossible to do justice to a story like this within the framework of a feature film — especially one with as wide a scope as Detroit. ■