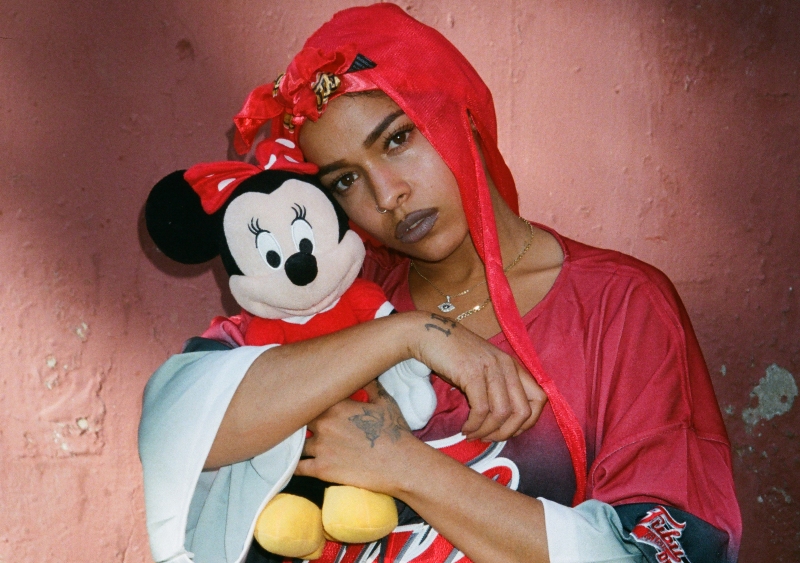 Strong, unapologetic and beautiful are words that describe Destiny Frasqueri, an independent artist known by her alter-ego Princess Nokia.

A girl playing basketball, soccer, boxing, in gold chains, in a plaid shirt and a white dress. The duality of the feminine imagery is what the viewers encounter as a strong female voice raps through computer speakers.

In early August I called her up to talk about her third mixtape (1992), sisterhood, creativity and power.

Mira Silvers: Can you start with the inspiration behind the name Princess Nokia?

Princess Nokia: I just wanted to come up with a cool name that was cute and kinda of animated. And, I think I took the inspiration [from] not having a phone or a computer at the time. I was seeing all these music videos and touring plans off of an Obama government phone and I was like, “Well, I’m queen of the trap phone.” It’s really cool, it had so much character [and spoke] to the type of person that I am. So Princess is usually considered very glamorous and, you know, high maintenance. But, I am the anti-princess. I’m the princess of poverty, a little orphan princess. Like the real side of a princess. Just like a young, sweet animated female protagonist who came from the slums and didn’t have much to work with, but who is making something out of something that she has.

MS: Hearing the name Princess Nokia made me think of The Matrix.

PN: There was a lot of Matrix influence going on there.

MS: Oh yeah, are you a big fan of the Matrix trilogy?

PN: Yeah actually, and a lot of it influenced my first album [Metallic Butterfly].

MS: Let’s talk about 1992. What was the process of putting together a mixtape like that?

PN: You know I wanted to take a break from normal competition writing. After I had done my first two mixtapes, Metallic Butterfly and Honeysuckle, I wasn’t really satisfied with what I was making. I wasn’t satisfied with my singing. I wanted to do something different. So I started writing poetry and rhyming again.

When I made 1992, it began with a real clean slate. You know, I spent a couple of months not making any music at all. After I put out Honeysuckle, I took some time to just really think to myself and go ‘What do I want to create? What do I want to say?’ And, I just started writing really, really simple poetry — that’s really what it is. I was just spending a lot of time going around New York putting myself into these writing exercises: every day I would make myself go to Central Park or Jefferson Park in Harlem, and I’d take a journal and just writing everything that kinda came out that I felt was correlated to my childhood, my youth, my identity, my life — everything that had some sort of relevance to every little bit involvin’ me. It was this really, really cathartic awesome experience. There was world music for hours on end, you know, walking around the city, and I formulated 1992. 1992 was like, every song was like a chapter in a book that’s about myself. And it was really fun.

MS: You said that you got back into writing poetry again. Did you take influence from your love of Harlem Renaissance writers?

PN: It always has an influence on what I do, but it wasn’t the big influence. I’m just like… I am kid, I am a growing girl, a growing person, for different years and seasons in my life. I have different moods, different subject matters that I’m writing about. At the time I was writing, it was just really lighthearted and there weren’t any dark tones. So my writing process was very free, very fluid and very wholesome and included so many things [such as] mundane subjects of the heart.

PN: I just wanted to make a really good, classic hip hop album. I started rapping and reteaching myself how to rap, really familiarizing myself with poetry and with the style of hip hop, again. I come from doing experimental [music] like drum & bass, jungle, R&B, and soul music and all that kind of stuff. So, when I started rapping again, I wanted to do it right, and I wanted to do it really respectful. I wanted to come into it with a lot of head-on hip hop, like real warm, old school flavour that really influences me and that I really relate to. That was my main focus.

I am a musician, and every year I challenge myself to make a music project that reflects some goodness in myself. The artistic protection that I have, I want to exercise that. So, I really didn’t have too many expectations. This is just a music project and this is what I do. Some people wanna come and see me play. Every year I need to work on a project so that I may sustain my life as an artist, tour and [have] the little opportunities here and there.

MS: Can we talk about the imagery and lyrics in “Tomboy?”

PN: I mean what do you want me to say, darling?

MS: Haha! Whatever you wish. I suppose it’s straightforward.

PN: I mean it’s pretty straightforward. (There’s) a tomboyish masculinity that I exude, both in my style and my personality and in my fluidity. There isn’t much to it: I am a tomboy; I’m a tomboyish kind of girl. “Tomboy” is about the love and the comfort that I had with my style and my sensuality and my beauty, which is considered unconventional and which isn’t always feminine, which is extremely messy and boyish. And I love that and I wanted to celebrate that part of me that had always been who I am and a big part of what I do. An unconventional beauty that is a little dirty and a little gross, but still really sweet and lovely, and still girly at the same time. It all came from  an innocent, wholesome place. As a young girl finding her place in the world, there was no better place, feeling really content with just walking outside and knowing that I was happy and healthy by being happy with what I saw in the mirror and however I felt (about it).

The baggy clothes, the backwards cap, the big t-shirts and the dirty sneakers — that has always been my comfort. And it took me a long time to feel comfortable like that. And finally I realized that this is it — this is the best part of me. This is all of me. And it’s something I’m proud of and that makes me beautiful and makes me feel free and fun. It doesn’t make me feel like I’m trying to be anything else that I am not.

MS: To continue on with that imagery of beauty, can you talk about the thought process and imagery of women and sisterhood in “Brujas”?

PN: Well, I like to explore and celebrate the themes of sisterhood, of blackness, of brownness, of divine matriarchy, of urban feminism in my work. I’ve been doing so since Metallic Butterfly.

And you know me, as a female rapper and as a very different artist from most women in my field, I’m inspired by art, high art and the perception of symbolism. So I really enjoy featuring women, beautiful strong examples of women from my community in my work, which I did with “Young Girls,” which I did with “Nokia,” which I did with “Soul Train” and then with “Brujas.” And in “Tomboy” and “Kitana,” you see that it’s a common theme.

The sisterhood between black and brown women is a theme that I’m constantly exploring and celebrating and reinforcing because it’s a theme of beauty and positivity and wellness. And it’s a theme that I want younger girls to see so they feel inspired and understand that their representation matters.

MS: I completely agree with that. You mentioned that you’re very different from the women in your field. Do you think that women in rap are not exploring this concept?

PN: No, it’s not that they aren’t exploring the concept. This doesn’t have to do with other female rappers, this has to do with rappers in hip hop, which is the world of narcissism and megalomania and ego, when we focus only on ourselves, which is not entirely a bad thing. But how many people use other people as their subjects instead of themselves? Do you know what I mean?

PN: Yeah! It is a big deal when you feature other beautiful women and say look at them and not look at me as much. This tis he story and this is the subject matter and these are the people or the women — these are the real people. Only featuring myself in the storyline or the video would be limiting and under-representing.

MS: True femininity, feminism, and women should be celebrated in hip hop and rap. How do you do it?

PN: Women are over-glorified and overly sexualized. Women are regarded as objects. When it comes to divine aspects, women as subjects become undervalued. So it’s really great that I can influence these themes as an important subject in art, in visualization through hip hop.

MS: How do you feel about being labelled a role model?

PN: I have no problem with that label. I consider myself an eternal big sister, a mother-type, to a lot of people. And I don’t think it’s cumbersome. I think I’m very honest with my fanbase. Don’t glorify me for my image or for a perfect image or perception. You might consider me your role model because you might admire and value and respect my intellect. But you also admire and value my honesty, my thoughts and my mistakes. So, yes, in some way I’m role model to many many people in this world and I happily accept that because that is just life. Young women look up to me because I create inspiring and empowering music. You can’t have one without the other.

Am I bothered by the pressure? No, I think that my fanbase has a lot of respect for me and my values and my flaws and mistakes. I am very lucky to have a very very forgiving and understanding fanbase that values me as a human and values my mistakes and my flaws as well as my accolades. ■