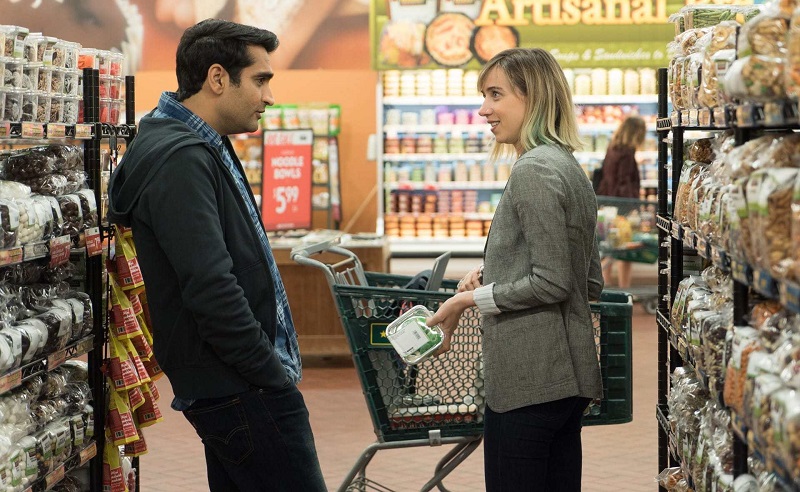 Kumail Nanjiani and Zoe Kazan in The Big Sick.

Rom-coms and slasher movies are the two genres whose audiences have most been beaten down into the submission of familiarity. They’re so rigidly coded that die-hard fans have come to almost require them to play exactly as they expect all the time — which, I think most of us will agree, is not a step towards better movies.

I don’t even remember the last time a rom-com actually bucked the trend in a way that wasn’t straight parody (They Came Together) or knowingly reinvigorating a premise (Sleeping With Other People) and, in some ways, The Big Sick doesn’t even really do that. It has a meet cute and (spoiler alert for a movie written by a married couple about their own lives) a happy ending. It has wacky friends and awkward parents. It also has a more nuanced view of early relationships than almost all movies — a more grounded vision of “puppy love” that replaces the ever-present butterflies and fountains with the kind of awkward negotiations that come with the early stages of a relationship.

Kumail Nanjiani plays a somewhat fictionalized version of himself, a Chicago stand-up comedian from a devout Pakistani Muslim family who finds himself torn between love and tradition when he falls for Emily (Zoe Kazan), a soon-to-be therapist whom he clicks with instantly. But Kumail’s parents (Zenobia Shroff and Bollywood legend Anupam Kher) are set on him embarking on an arranged marriage just like theirs, a fact that puts a tremendous strain on his relationship with Emily. Just when she’s drawn a line in the dirt, however, something unexpected happens: Emily winds up in the hospital with a serious illness, and Kumail soon finds himself moving from the role of on-again-off-again boyfriend to caretaker alongside Emily’s overwhelmed parents (Holly Hunter and Ray Romano). With Emily in a medically induced coma, Kumail finds himself completely immersed in her life — even though it seemed pretty clear they were no longer together before she fell into said coma.

Here’s the thing about The Big Sick: I already knew more or less what its story would be from hearing the real Emily (and co-writer of the film) Emily V. Gordon tell the story on a podcast years before this movie was ever a thing. I knew more or less exactly what happened, and yet it still came as a bit of a shock when the movie veered from millennial rom-com to medical drama. (I suppose medical rom-com is still more apt, but it’s hard to call something a rom-com when one of the characters is in a coma.) Part of what makes The Big Sick so great is a messy attention to detail — to the stops and starts and awkward peel-outs of a relationship in its early stages. Kumail and Emily’s meeting is a little awkward in that rom-com way (she heckles him while he’s on stage) but it never settles into the kind of glossy movie groove that so many films of this genre lean on.

One of the most common flaws of movies based on real life is that they tend to over-cram. Pruning and editing your own life is a bizarre exorcism of a task, and most people would just rather pile it on than reorganize the priorities of their own biography. The presence of Judd Apatow as producer would suggest that The Big Sick has some of those shaggy, free-form qualities that Apatow’s films have — and it does — but it also balances narrative constructs with texture admirably. It’s a film that’s inherently dramatic without dipping into capital-D Drama, which is a pretty hard balancing act to pull off in any circumstance.

Nanjiani has already proven to be a talented comedic pinch-hitter, showing up in supporting roles in broad comedies, not to mention his co-lead role on Silicon Valley. There is more going on in The Big Sick than in all of those things combined — not only does he have to plumb the depths of a pretty traumatic time in his own life, but he also has to dial back on his own stand-up career to play a significantly less talented version of himself. Suffice to say that if there’s a movie that could ever take Nanjiani to the next level, it’s this one.

There’s something refreshing about The Big Sick, and not just because it’s a rare American comedy featuring a Muslim lead. What’s so great about it is that it doesn’t subscribe to the general language of movie love (or movie illness) and somehow manages to feel realistic without being overly downbeat. (The most realistic rom-coms tend to be the ones that end poorly, in my experience.) It’s a bit of a kitchen-sink free-for-all of themes and ideas, but that’s the beauty of it. It offers no absolute answers for its leads — but they did wind up writing a movie about it. ■

The Big Sick opens in theatres on Friday, July 7. Watch the trailer here: