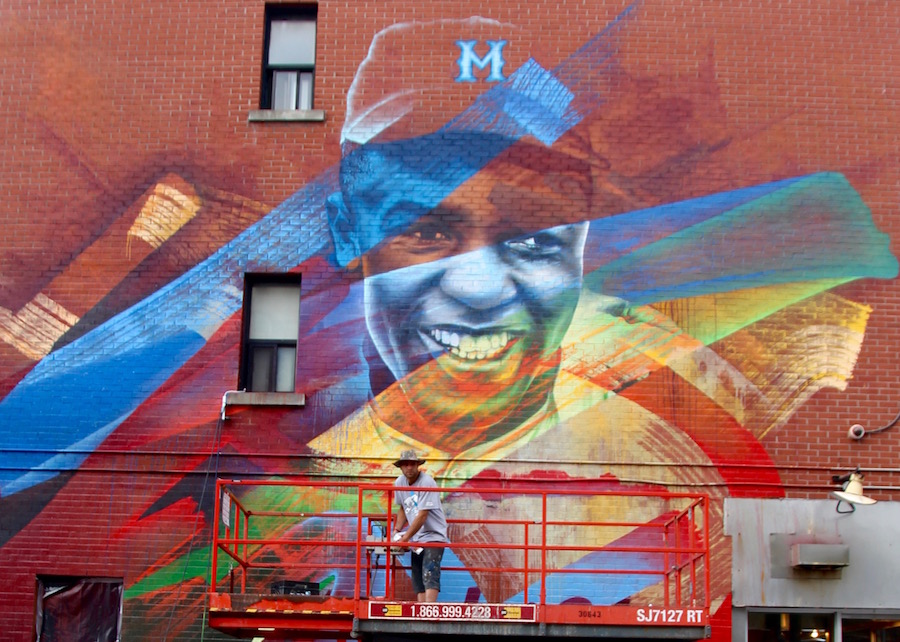 Fluke works on a new portrait of Jackie Robinson during MURAL Fest. Photo by Lisa Sproull.

This year’s edition of Mural Fest is in full swing as it enters its final weekend, with most of this edition’s crop of 22 colourful new murals now in their final stages of production. Watching the murals unfold is always an exciting pastime, and the development of this year’s works have slowly revealed that Montrealers are being treated to two different tributes to a pair of Montreal legends just steps away from each other: the late Leonard Cohen (by Kevin Ledo), and Major League Baseball’s first black player Jackie Robinson, rendered by A’shop founder Fluke.

Prior to breaking the major league’s colour barrier with the Brooklyn Dodgers in the 1947 baseball season, Robinson spent the 1946 season playing for the Dodgers’ minor league affiliate team, the Montreal Royals (where he was also the first black ballplayer to play for a minor league team).

Seventy years later, Fluke is paying tribute to the courageous Robinson with a larger-than-life portrait on The Main, depicting a photorealistic Robinson in his Montreal Royals jersey and cap. The mural is being produced in partnership with Cadillac Canada as part of their Canada 150 celebration project 150 Daring Moments, highlighting 150 individuals and actions through Canadian history whose legacies have made a lasting impact.

As part of Cadillac and A’shop’s tribute, they’ve teamed up with ballcap producers New Era to produce a limited run of 250 Montreal Royals ballcaps in the same style as the one worn by Jackie Robinson during his breakout season in Montreal. The caps, including some painted by Fluke, will be given out for free at the site of Fluke’s mural (corner of St-Laurent and Napoléon) during an event Saturday, June 16 at 12pm until supplies last.

We caught up with Fluke during a break from painting to find out more about the project.

“I was approached by Cadillac to pay homage to one of Montreal’s icons,” Fluke explains.“At first we were thinking about designing some custom hats, like a signature series ballcap, so we reached out to New Era and started talking to them. Then the idea kind of evolved as we wanted to do something, to leave something behind that people can actually admire for a longer period of time. I proposed the idea of doing the mural and then giving away the hats.

“Jackie Robinson, and his wife too actually, had an amazing journey. I knew the basics, but I didn’t know how deep and amazing this person was until I started reading up and doing my homework. Hopefully the mural will inspire people to learn more about him—He has a very interesting, amazing story. My work is portrait-based so it’s about paying homage to this person and bringing him to life.”

In addition to his stellar baseball career as a second baseman (during which he was named Rookie of the Year, National League MVP and won a World Series Championship), Robinson was politically active in the civil rights movement, sitting on the board of the NAACP, helping to establish and support black-owned businesses and financial institutions, and launching a construction company dedicated to building affordable housing for low-income families.

In addition to the mural’s inspirational subject matter, it’s a notable piece of art in other ways too—Fluke is creating the work using innovative new techniques he began developing during a recent mural project during Art Basel’s 2016 edition in Miami Beach.

“During Art Basel, I decided to incorporate some of the graffiti letters—font work, tags and stuff like that, and kind of superimpose them onto an image. I used a special clear coat that allows me to do multiple layers and then pressure wash certain elements that I don’t like, or that I can use as are reverse stencil. This is what you’re seeing on this mural—it’s kind of an upgraded version 2.0 of what was done over there.

“The new twist to this is that I’m using giant brooms that I’ve cut and chiseled to make them look like giant paintbrushes. The idea of this was to move away from the kind of too-clean graffiti work and purposely make it look like a giant canvas. I wanted to move away from the ‘mural’ side of things and make  this piece to look as authentic as possible, as if I was painting a canvas in my studio rather than the classic mural composition. I’ve designed it in a way so that in five, ten, fifteen years even if it starts decaying and peeling, it’s still going to look amazing.” ■

Meet Fluke and get your hands on a special, limited edition Montreal Royals cap by New Era at the site of the Jackie Robinson mural, corner St-Laurent and Napoléon, on Saturday, June 16 from 12pm.