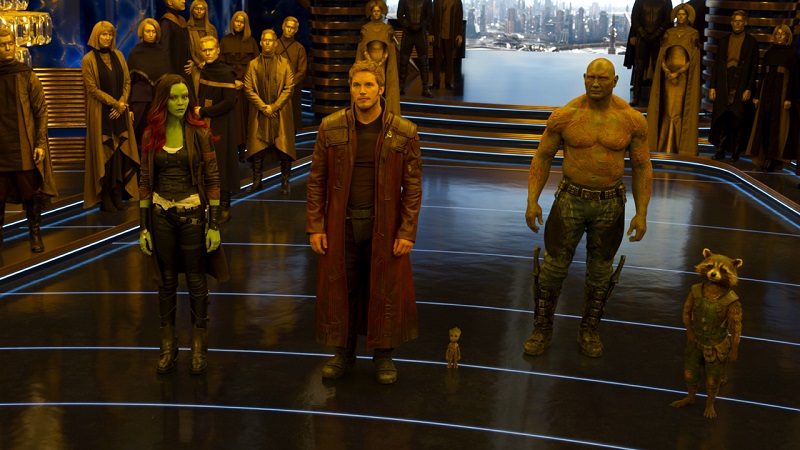 Here are the first two scenes in Guardians of the Galaxy, Vol. 2 (these do not constitute spoilers, unless you consider that knowing that there are scenes in a movie is a spoiler in itself): the first scene has a creepy, smoothed-out-thanks-to-CGI Kurt Russell driving a hot rod and listening to “Looking Glass Brandy (You’re a Fine Girl)” with a woman who we assume is Star-Lord’s mother, since the title card says this scene is taking place in Missouri 34 years ago. The second scene has the Guardians fighting a nondescript space monster in the background while the very adorable incarnation of Baby Groot dances around to ELO’s Mr. Blue Sky and the credits barrel past. These are the two worst scenes in Guardians of the Galaxy Vol. 2 (heretofore Guardians 2) – it’s as if they deliberately put a spoke in the film’s wheels in order to give itself a reason to get back up and fight.

The first scene sucks because it exemplifies everything that is terrible about blockbusters that aren’t Guardians 2: it’s entirely useless exposition AND it uses this gross de-ageing technology that studios are apparently convinced is totally seamless (see also: Rogue One). The second scene sucks because it’s pretty blatantly giving the people what they want: people loved the Baby Groot dancing in the first film, so here’s more of it. “Here’s more of it” seems like a half-decent M.O. for this film at first – after all, you’re never going to replicate the novelty factor of the first one, which remains to this day the only real risk ever taken by the Marvel Cinematic Universe.

And ultimately I’m not so sure what it is about Guardians 2 that makes it work so well considering it’s, in many ways, an inferior film. The first film’s soap opera dressing made it feel different from the glut of superhero films it was released in the midst of; that glut remains active to this day, and Guardians 2’s space opera elements feel less radical this time around. Baby Groot is extremely fucking cute, and I tend to think that big explosive blockbusters that also take time to shoehorn in an inconsequential but extremely cute tertiary character are dumb. The film’s sense of humour is still very much present, but it feels cornier on the second lap. Guardians 2 feels more like a Marvel film than its predecessor, more indebted to the sausage-grinding machine and flat aesthetics than it did only a few years ago – but that formula, hackneyed as it may be, still works.

Soon after the events of the first films, the Guardians are tasked by Ayesha (Elisabeth Debicki) to steal some precious batteries that will come in handy for her planet of genetically engineered, gold-skinned perfect people, who also happen to be holding hostage Gamora’s very angry, mostly evil sister Nebula (Karen Gillan). The Guardians make quick work of the monsters who hold the batteries, but nevertheless find themselves fucked when Rocket (voiced by Bradley Cooper) decides to steal back some batteries for the good and simple reason that he’s an asshole. Their thievery makes Ayesha’s people real mad, and they hunt down the Guardians using remote-controlled space-drone technology that forces Star-Lord (Chris Pratt), Gamora (Zoe Saldana), Drax (Dave Bautista) and Groot (still, in his tiny form, voiced by a pitch-shifted Vin Diesel) to crash-land on a planet where they are soon acquainted with Ego (Kurt Russell), a man who claims to be Star-Lord’s father. Meanwhile, Star-Lord’s OTHER father, the Scavenger Yondu (Michael Rooker), is hired by Ayesha to track down the Guardians on her behalf.

It’s not necessarily as complicated as it sounds, in part because director James Gunn keeps shit moving fast and in part because under all of its funky character names, jetpacks, antennae, incongruous Sylvester Stallone cameos (he has two scenes as a Ravager that are honestly completely superfluous – but of course they must preface some other twist three movies down the line) and wild planets, it’s a pretty straightforward Spielbergian daddy-issues story. (The fact that there’s a character literally named Ego here means few surprises are held for the third act.)

What I think Guardians 2 has over nearly every other superhero movie is a true sense of character. The characters in most superhero movies are icons; they’re larger-than-life in a way that prevents them from ever truly feeling organic, no matter how good the actors portraying them can be. It seems positively insane to say that a movie where a talking racoon and a toddler who’s also a tree are major characters, but Guardians 2 has respect and a real understanding of its characters.

For all the platitudes about family inserted into the script (though nowhere near as many as in the other Vin Diesel-starring franchise of the year), Gunn really does allow these characters to grow. All characters “grow,” especially in a film-by-committee like this one. You can chart their “growth” if you sit down and look at the beats on paper, but Guardians 2 is that rare breed of dumb movie where a bunch of incomprehensible shit happens and yet you find yourself actually caring that the characters will make it out of there, somehow. Gunn has assembled a truly ragtag cast that works precisely for its incongruous nature, and the core team at the centre of Guardians remains the main reason to watch a story that’s getting increasingly bogged down in producing the sheer torque necessary to keep these blockbuster behemoths running. Unsurprisingly, when Guardians 2 does decide to slow down and project real stakes on its characters, it actually ends up working really well.

Of course, the cynic in me knows that if the characters make it out, it’s only so that they may power their way through some more nondescript CGI mischief two years down the line. That’s fine, I guess. It was never truly a given that the Guardians were the saving grace of anything, and they’ve managed to carve their niche amongst all the white noise. Guardians 2 has no less than four credit stingers, at least one of which was so completely undecipherable to me as a comics neophyte that even Googling it left me unsure of what exactly that stinger was teasing. On one hand, that whole bit of business is wearying and obtuse; on the other, it might pave the way for something actually unknown and mind-blowing.

In the meantime, I can only keep watching – reasonably entertained, at best, but still somewhat hopeful. ■

Guardians of the Galaxy Vol. 2 opens in theatres on Friday, May 5. Watch the trailer here: