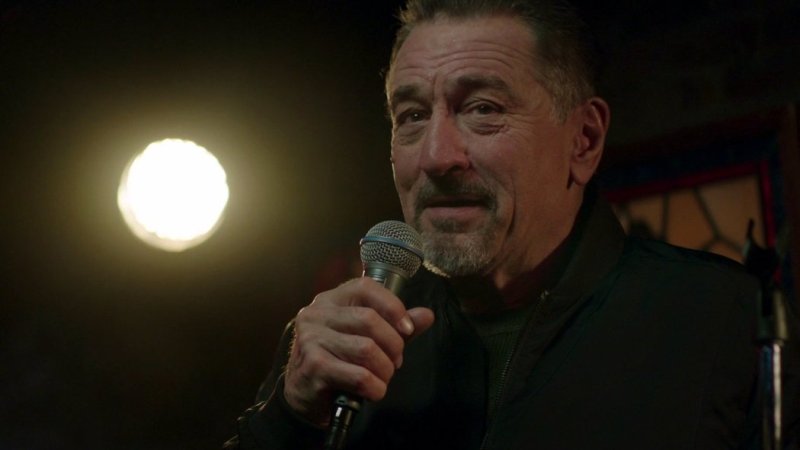 Stand-up comedian is definitely the least represented showbiz job on the cinematic landscape. When a film’s protagonist is a comic, they more often than not end up being played by an actual seasoned stand-up performer (Jenny Slate in Obvious Child, Mike Birbiglia in Sleepwalk With Me).

No matter how good the jokes you give an actor may be, it’s very difficult to make the particular craft of stand-up convincing unless you’ve done a lot of it yourself. That’s one of the many lessons to be taken from the so-so movie The Comedian, which despite a true inside-baseball approach to the world of stand-up, pulls off the peculiar trick of being a dramatic comedy that’s neither particular funny nor particularly dramatic.

Jackie Burke (Robert De Niro) is an ageing comic best known for a role on a long-running family sitcom called Eddie’s Home. The formulaic, well-scrubbed pleasantness that made Eddie’s Home such a hit is diametrically at odds with Jackie’s crass stage act, which sits somewhere between Borscht Belt scenery-chewing and vicious roasting. He’s not a particularly desirable quantity in the current comedy landscape, finding himself doing nostalgia shows at clubs in the suburbs. It’s during one of these shows that he decks a feisty YouTuber who heckles comedians as part of his own routine. The stunt lands Jackie in jail for a month and in community service upon his release. That’s where he meets Harmony (Leslie Mann), who has chosen to serve her community service in New York to get away from her overbearing father (Harvey Keitel).

Director Taylor Hackford and writer-producer Art Linson clearly have a desire to set this in a tangible comedy world. Many comedians appear as themselves, roastmaster Jeff Ross has a screenplay credit and New York comedians Jim Norton and Jessica Kirson (both of whom appear on-stage in the film) are credited as “comedy consultants,” and yet the character of Jackie Burke is such a varied composite that he never quite convinces as someone who could conceivably exist. Pitched somewhere between Don Rickles, Bob Saget and (perhaps unavoidably) De Niro himself when he stiffly does the talk-show circuit, Jackie Burke is a walking contradiction: a man’s man who drinks whiskey on the rocks and wears a suit (one that he pressed himself while jamming out to Art Blakey records) to a meeting with a hip new cable channel (?!), but who also goes viral for changing the words to “Makin’ Whoopie” to the much more crowd-pleasing “Makin’ Poopie.”

Comedy geeks might revel in the way the film depicts (rather accurately, to my knowledge) the nitty-gritty of the working New York comedian, but people who enjoy laughing might be less well-served by the sophomoric Roastmasters-lite material served up by De Niro. Try as he might, he never cuts a particularly convincing figure on stage, which is rendered even more obvious in contrast to the footage of actual stand-ups sprinkled throughout. On the flipside, the film’s more pronounced dramatic strides get lost in a story that’s in no particular hurry to get where it’s going and takes so many breaks and asides that it’s easy to forget what’s at stake at any moment.

The Comedian is nevertheless a relatively painless and almost pleasant watch thanks in part to the relatively formless nature of the script, which pushes Jackie from setpiece to setpiece, where he eventually gets to act angry and curmudgeonly at a surprisingly stacked cast. Watch Jackie tell some salacious jokes at his niece’s wedding, which delights his brother (Danny De Vito) but horrifies his sister-in-law (Patti LuPone)! Watch Jackie bomb spectacularly while roasting a nonagenarian actress (Cloris Leachman), earning the ire of his Roastmasters nemesis (Charles Grodin)! Watch Jackie host an extremely wack low-budget Fear Factor ripoff on what appears to be a YTV set from the mid-’90s! Watch Jackie tell it like it is to Harmony’s super-tacky, deeply bronzed dad, in a scene that will in no way evoke Mean Streets!

Quentin Tarantino often brings up the idea of the hang-out movie, films more predicated on the relationship between characters than narrative drive to the point where watching the film feels like you’re hanging out inside of it. Tarantino uses it to describe films like Rio Bravo and Dazed and Confused – films that have no business being compared to The Comedian, certainly, but comes closer to describing the peculiar charms of a movie that actually isn’t too good. The Comedian is not that funny nor that engrossing, but there’s something comforting about hanging out in it. There’s something charming about the modesty of its ambitions, even if nothing about it is destined to remain memorable longer than a week. ■

The Comedian opens in theatres on Friday, Feb. 3. Watch the trailer here: