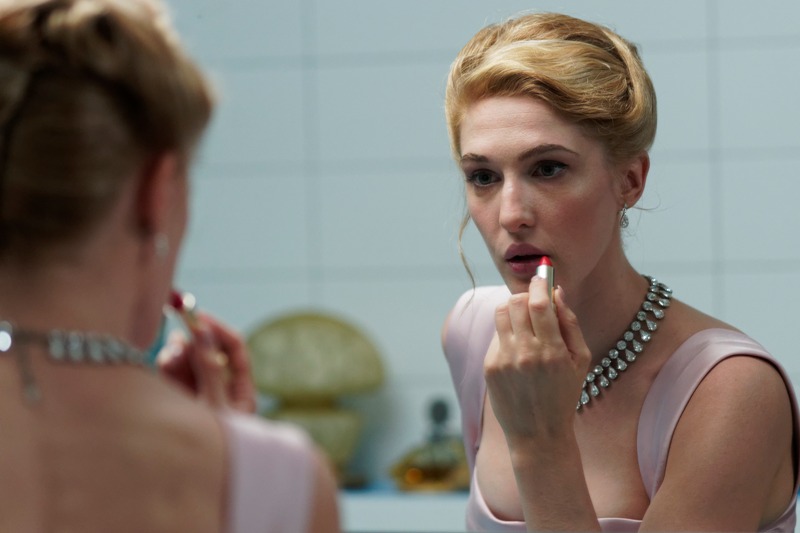 The writer as gossip-rag celebrity is a rather infrequent phenomenon, but certainly no one got it quite as badly in Quebec as Nelly Arcan. The incredible success of her first novel, Putain, brought her into the limelight; the novel was a semi-autobiographical story of her days as a student by day and escort by night. Beloved by both critics and the public, Putain’s success nevertheless cast Arcan as a writer bound by the limits of her own life. The outwardly blonde, outwardly brassy Arcand never quite replicated the success of Putain, but she became a celebrity just the same, carving out a niche as one of the few literary household names in the province. Arcan committed suicide in 2009.

Anne Émond’s Nelly eschews the traditional biopic structure to explore different facets of Arcan’s personality. Drawing from both her writing and general biographical information (often intentionally blurring the lines between the two), Émond weaves a portrait of Nelly the demure writer, Nelly the sex worker, Nelly the substance-abusing jealous lover and Nelly the celebrity. Not all of it is based in fact; not all of it has a direct correlation to Arcan’s fiction, either.

“I think Nelly Arcan’s work functions in a way — perhaps an unpleasant way — that’s very repetitive,” explains Émond. “She has obsessions that she visits over and over again. Even if the reader has had more than enough hearing about them, she hammers them over and over again because they’re the things that concern her: ageing, men, prostitution, humiliation, self-destruction. The film uses that kind of hammering in its structure – we add layer upon layer of pain, in the end. It doesn’t work in structured acts, and I don’t think we can talk about someone who was well-known by explaining how she felt about specific moments in her life without being more than a little reductive.” 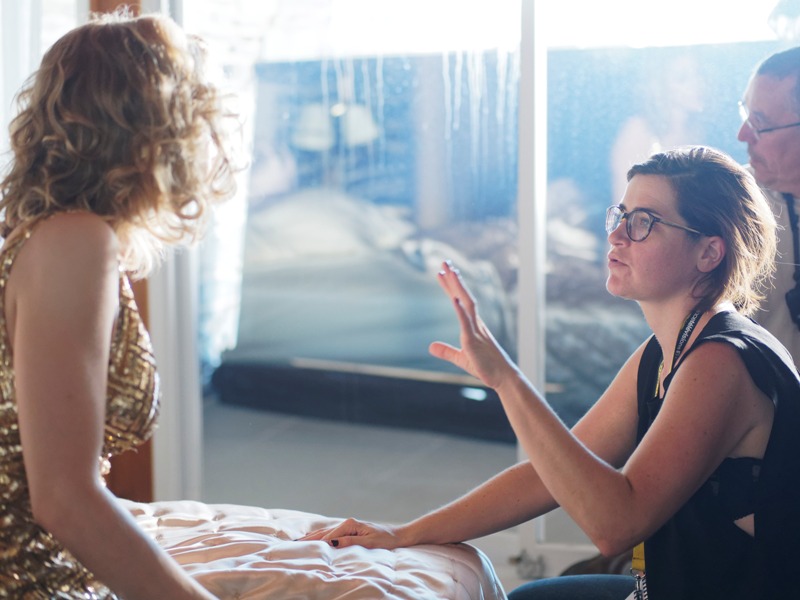 Anne Émond (right) with Mackay on the set

Producer Nicole Robert says the first gasps of the project happened while Arcan was still alive; she had collaborated with her on a tentative adaptation of Putain. “I really loved her first book, her writing, her personality, and I wanted to adapt it,” says Robert. “I bought the rights to Putain and Nelly was involved in the project, but not directly in the writing. It didn’t really wind up being satisfying enough on the page to move forward with the project; time went on, she died, but I kept thinking about it.

“At some point, I decided that an approach that combines her life and her work would be the most appropriate, but I hadn’t thought of who could be involved. I saw Nuit #1 and wanted to meet with Anne about upcoming projects, without necessarily linking her to this idea of a Nelly Arcan movie I had. When the project came back to me, I thought of Anne immediately.”

Mylène Mackay plays Nelly in all of her permutations. Though the film takes an approach reminiscent of I’m Not There in its characterization, Mackay embodies all facets of Arcan. It’s Mackay’s first lead role — and what a lead it is. I ask her how she feels about not only being the lead, but being in nearly every frame of the film and being depicted on bus stops and multiplexes all around the province.

“I’m moderately happy with it, I’d say,” she laughs. “It’s a little strange. I went to the movies over the Christmas holidays and there was an enormous poster of literally just my face. On the other hand, someone who doesn’t know might not recognize me, so I’m… it’s okay.”

Émond initially favoured a more traditional approach to the material. Her first draft was a straight chronological telling of Arcan’s life that she wound up scrapping entirely. “I knew Nelly interested me both as a person and as a writer,” says Émond. “I knew that it was a tragic, rich, explosive character and that there was a movie to be made there, but I didn’t know what shape it would take. I accumulated information over time in a process that would almost be akin to documentary — I read her works, I met people from her life and when I returned with all this information, it was as if I needed to assimilate it somehow. The script that resulted from that assimilation was… banal, maybe? Basic, certainly.

“That could’ve been an angle, and perhaps another filmmaker would’ve made a great film with that approach,” she continues. “When I was done writing it, I re-read it and I really thought that it was dull and overly straightforward. I had to face the fact that, first of all, Nelly Arcan is not the kind of heroine that someone like Dédé Fortin or Édith Piaf was. It can’t be treated the same way, as a chronological, factual biography, and in fact I thought that approach didn’t do her justice. Even if the facts were verifiable, Nelly Arcan’s life and work were so chaotic that there’s almost no such thing as ‘the truth.’ In the end, I opted for a structure that was a lot more fragmented and a lot more abstract but wound up, I think, skewing closer to her perception of her own life.” 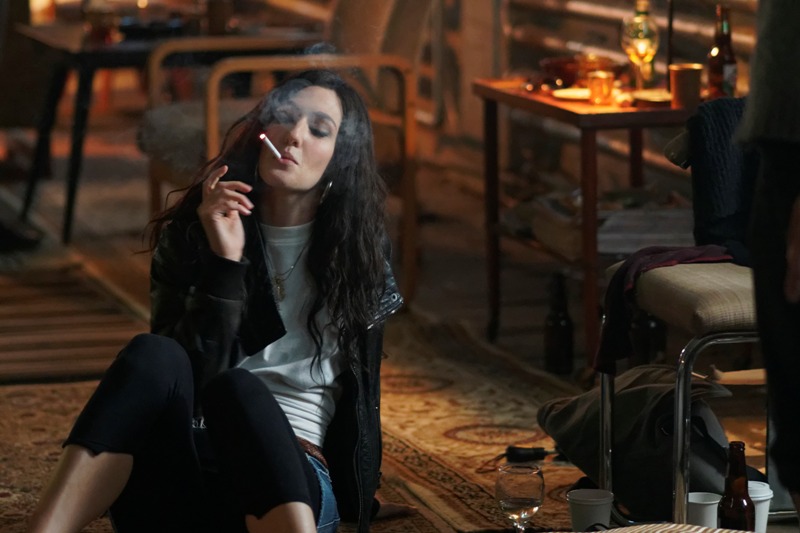 That approach also weighs heavily on Mackay as a performer, who has to navigate the multiplicity of looks, feelings and emotions that comes with playing four angles on the same character. “They helped because we shot each character sequentially,” explains Mackay. “That way I could compartmentalize them in my body and bring them out one-by-one. It remains a much more involving preparation process than usual, though, because you have to prepare four characters in the same way you’d usually prepare one. (…) I worked with an acting coach, Alice Ronfard, who helped me go through the script and make choices for each of them pertaining to their voices, their walks… I had to make different choices for each and make sure they were clear enough in my head that I would be able to set them apart yet make them feel and sound similar as well. They all have the same discomfort and desire to please — their anxieties are all connected.”

Robert says she was stunned to find how close Émond’s own writing was to Arcan’s — to the point where they were sometimes indistinguishable from one another. “There’s really a sort of a fusion of the two voices,” she explains. “It gives a sort of impressionistic portrait of Nelly, with various brush strokes describing each facet of her personality. When she came up with the idea of depicting her as four characters and shooting each character in a different style, I thought it was very interesting and very risky at once, but it was worth a try. Once I knew she’d thought of that, every other angle seemed stale.

“I basically had to absorb it all,” says Émond of the writing process. “In fact, I’m trying to get out of it now, because it’s pretty heavy stuff. But I absorbed an enormous amount of her work and of who she was to the point where I was obsessed. I’d wake up in the middle of the night to think about her and to talk to her — I’d become almost a mystic (laughs), communicating with Nelly Arcan. I’m exaggerating, but there was a point in the production where we had to go back and determine for various legal reasons what I’d invented and what I’d taken from which writings – and even I couldn’t really figure it out. (laughs) There are some real expressions of feelings from me in there. Most of the voiceovers are from her writing, sometimes adapted to fit the context, but the scene where she confesses in church towards the end is all me.

“I really wanted to make a film that would explore the subjects surrounding Nelly Arcan,” says Émond. “It’s a film about what it’s like to be a woman in the world, about art, about ageing, about beauty , about death… it’s a film about a lot of things but it’s specifically not about the small part of Nelly Arcan that was her life and the bullet points that make it up. It’s a film about ideas, not dates.” ■

Nelly opens in theatres (in French only) on Friday, Jan. 20.