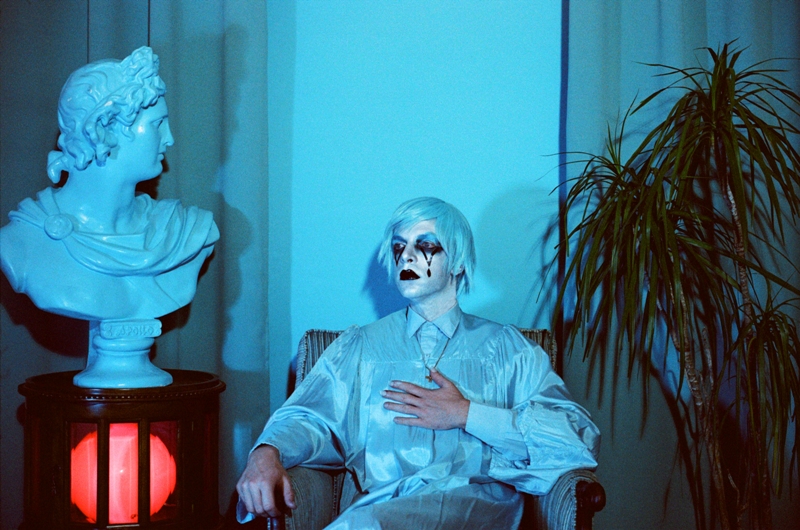 Drab Majesty is more than a music project, at least according to the artist at its centre. The sound isn’t what you would call “experimental” — it’s a guitar-driven, synth-supported fusion of vintage goth, shoegaze and new wave projecting echoes of bands like the Chameleons and New Order, self-described as “tragic wave” — but Andrew Clinco’s songwriting methods and live performance are based in a ritualistic spiritual practice that goes beyond what many musicians allude to when they say “the song wrote itself.”

Explaining what Clinco calls divine inspiration is best begun with an introduction to his alter ego, Deb Demure. When we spoke recently, I was told to ask for Deb, and wondered whether Deb was merely a stage name, a creative persona or part of Clinco’s everyday life.

“The lines are very blurred. A lot of people call me Deb in my normal waking life. It remains the sole name of my performative persona — that is never Andrew, but Andrew and Deb are pretty interchangeable amongst my peers in L.A.,” he explains, noting he only dresses as Deb on stage — in coloured wigs, make-up and androgynous ceremonial garb.

“I don’t really look like that, and it’s important not to. The spectacle on the stage is very much like a sacred space for that, so I have to honour that and keep it strictly to the performance.

“As far as composing music, though, that’s a different exchange I have with my higher power and my homage to the character that is the vessel that brings the live performance. There’s a couple different facets of that: there’s the performer, there’s the person in plain clothes in waking life that is communing with this divinely inspired entity and trying to make the music that I think this particular character that I embody would make. That’s the kind of middle space.”

With great humility, Clinco explains that creative ideas have always come to him easily, but not necessarily on cue, making school projects a major challenge. Teachers had him convinced that he was lazy and had ADD, but what he calls “that divine spark” was either there or he was completely unable to create on command. These days, it’s something he can harness.

“I’m so regimented making records and making artworks, and I’m happy to do it on some kind of deadline. I know how to curate my creative space so that it is the most conducive to that particular reception. I’ve narrowed it down to certain times of the day when I’m more apt to receive. My studio is a very important sacred space for me and so is my home and also the car — I get lots of ideas on tour when I’m in the van. There’s just something about not being stagnant, and having your environment constantly changing, allowing the thought process to work in tandem with the motion of the vehicle. There’s a classic image of someone with writer’s block at a desk with a blank piece of paper. Sometimes that happens and I find that moving is a good way to get out of that.”

Clinco’s songwriting tool of choice is a guitar he feels especially close to, one that he received as a Christmas gift when he was seven. Though he played drums in bands for years (including Marriages and Black Mare, until fairly recently), he’s always gravitated to the six-string during the creative process, and for the foundation of his wall of noise on stage.

“I can’t read music. I have zero understanding of notation or harmony, I really know nothing about it, and I’ve chosen to keep it that way because I really feel that the guitar is a divining rod — it takes me to places on the neck and just writes itself. It’s an extension of myself, but I do put it down if it’s not happening — I typically know within 20 minutes.

“There’s a couple of songs on the new LP that were written in literally two to three minutes. The parts were there, they just appeared, and there was zero thinking. I don’t know how or why, I don’t try to question it too much. The songs were just there.”

The new Drab Majesty album is The Demonstration, a follow-up to 2015’s Careless. Thematically, the record links back to Drab Majesty’s debut release, the 2012 Unarian Dances cassette, which was named after California’s Unarius cult, which Clinco used to see regularly as a child care of cable access TV.

“They would broadcast these initiatory tapes and videos, these beautiful videos and Super 8 and Super 16 films. They’d employ all these really cool primitive video effects that I love — some of the symbolism and imagery really became embossed on my brain.”

The lead single from The Demonstration was inspired by Heaven’s Gate, another California cult that committed mass suicide in 1997, and specifically the image of its leader Marshall Applewhite in his final address. Unlike the majority of the writing on Heaven’s Gate, Clinco doesn’t assume that Applewhite was mentally ill and his followers were brainwashed — “39 by Design” considers the possibility that the cult members actually ascended with the aliens as they said they would, leading an exodus off the Earth after humankind reached its pinnacle of intelligence and genderless perfection.

“I definitely take an empathetic view of cults. There’s something really special about them and how dedicated they are. I don’t believe they’re just these lost souls looking for some kind of self-help salvation — I think it’s something a lot more beautiful than that.”

Though Drab Majesty’s sound and aesthetic draws from Clinco’s Catholic upbringing — from the reverb-laden oratory vocal style to the ceremonial robes — his personal spiritual beliefs and practices veer towards the idea of collective consciousness and meditation, not to mention his academic interest in the occult. The Demonstration was the name that Heaven’s Gate gave to their final act (their step off this physical plane), but the record digs deep into the broader themes of faith, devotion and love.

“A lot of the songs focus on putting all your faith and devotion into one idea of one person, this tacit giving of one’s self without thought and believing that other people can hold answers and the cult of one in terms of a relationship. Interpersonal bonding is a big theme in my work, and I’m not criticizing it, I’m just saying that there is a dynamic that exists where we give ourselves over to other people in various situations in our lives and we do so in a way that supposes that all the answers and the exit lies in other people. That’s our demonstration of love.” ■

The local filmmaker spoke about the influence that the city continues to have on his work.