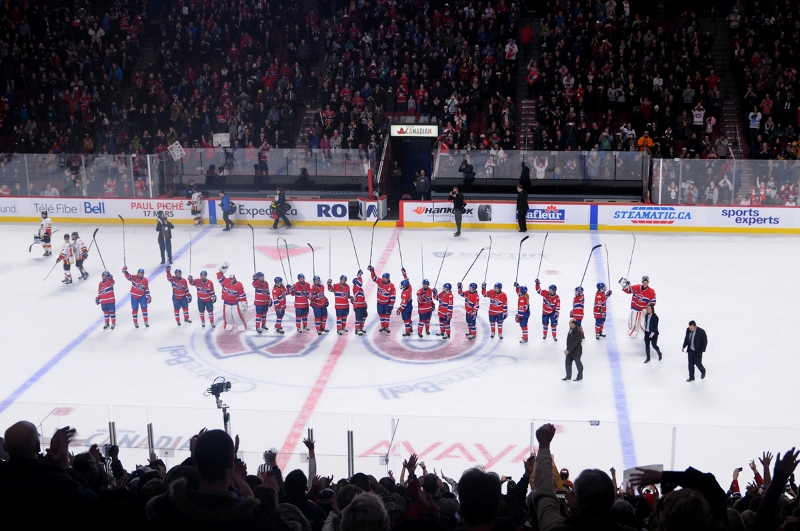 Les Canadiennes play the Bell Centre. Photos by Cindy Lopez (scroll down for the full gallery)

Saturday has always been hockey day (and night) in Canada, a time to take kids to hockey practice in the morning and watch the Canadiens in the evening. This past Saturday was a little different. Yes, there was a game at the Bell Centre with many in attendance but this time it was for les Canadiennes playing against the Calgary Inferno in a rematch of this year’s Clarkson Cup final. This was a game of historical significance — it was the first time the women’s team played their home game at the Bell Centre.

The women got the full arena treatment (thanks in part to their partnership with the Montreal Canadiens, which began last season). From the Habs announcer to the organ music to the Coldplay-soundtracked introduction, it felt like any Saturday at the Bell Centre. Even Youppi was there taking selfies with kids. There were a number of Habs-fan regulars at the game experiencing good old Montreal hockey. Attendance at the afternoon game totalled an impressive 5,938.

Looking for familiar sights from les Canadiennes’s games at the Etienne-Desmarteau arena, I spotted volunteers and a merchandise kiosk with the prized attraction of the team photo poster — something most sports teams should probably consider for a team photo. There was also the staple poster-making table where kids exhibited love for their favourite players through art.

The game was a goaltending duel between Montreal’s Charline Labonté and Calgary’s Emerance Maschmeyer. The highlight of the game came in the third period, when Labonté made an amazing glove save in the tradition of great plays by Montreal goaltenders. She got the shutout and the win for Les Canadiennes. Canadiennes captain Marie-Philip Poulin scored the lone goal, winning the first star of the game.

This was about more than points. It was a historical game not only for les Canadiennes but for the CWHL. As it enters its 10th season, the women’s league has taken great strides in growing the sport. Women’s hockey gets its shining moment during the Olympics but there is a great interest in these teams locally and nationally. The majority of the audience were young girls wearing hockey jerseys from their own teams they play for.

Growing up, there were no organized women’s hockey teams for me to play on. The arena near my home organized a ringette team for the girls, the closest thing to hockey back in my day. Now, there are plenty of organized women’s teams in Montreal. There was a moment when the jumbotron flashed to where the Montreal Stars/Canadiennes alumni were sitting, and former Stars/Canadian Olympic goaltender Kim St-Pierre was part of the ceremonial face-off.  These players were integral to the early days of the team and the league, in some ways playing a larger role than anyone else in this historical game.

Seeing women’s hockey in an NHL arena is becoming a reality, especially for the future of women’s hockey sitting in attendance that afternoon. Les Canadiennes know how to compete and win. Here’s to hoping that a Saturday game at the Bell Centre becomes an annual event. ■