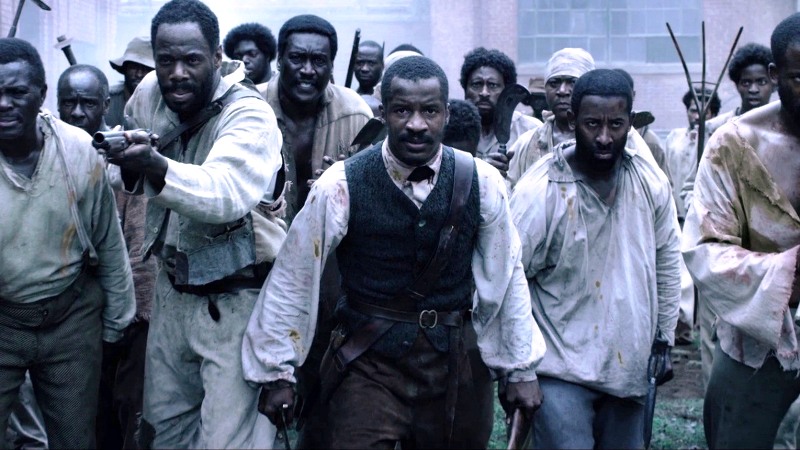 Nate Parker (centre) in The Birth of a Nation

I tend to side with the “separate the art from the artists” camp when it comes to controversial creators (and filmmakers even more specifically), mostly because films are a collective effort where devaluing them entirely feels like punishing the potentially great work of innocents for the actions of one. But that’s not a hard-and-fast rule, and it becomes increasingly difficult to navigate those waters when the controversial figure is all over the film in question, as Nate Parker is in his directorial debut.

Parker’s The Birth of a Nation hits theatres this week with a narrative arc behind it that could be its own movie. Celebrated at its Sundance premiere, it was picked up for distribution to the tune of a record-shattering $17.5-million and immediately considered a frontrunner for Oscars. It wasn’t too long before the press dug up a dark chapter from Parker’s past, wherein he and Birth of a Nation co-writer Jean McGianni Celestin were accused of sexually assaulting a woman while attending Princeton in the late ’90s. The issue had been settled (Parker was acquitted, while Celestin served time), but the case nevertheless caused some turmoil, which was exacerbated when it was revealed that the woman involved in the case had later committed suicide.

So far, very little of this has anything to do with Parker’s directorial debut, which chronicles the life of Nat Turner, a slave and preacher who led a doomed rebellion against plantation owners in 1804. The story of Turner is an affecting and still timely one — a fact that Parker was clearly keenly aware of when making this film, a streamlined hero worship vehicle that all but casts out anything that isn’t Turner’s fiery determination. Certainly, Parker was drawn to the nature of Turner’s struggle, the importance of his sacrifice and the way his story still holds relevance in an America that remains paralyzed by racism 200 years later. But watching the film, I also had the creeping sensation that he was drawn to how perfectly Turner could be turned into a star vehicle.

Turner was born into slavery in the early 1800s; an unusually bright child who manages to teach himself to read and molds himself into a preacher. He grows up alongside Samuel Turner (Armie Hammer), who goes from being a partner in play during childhood to inheriting Turner when his father eventually passes away. The relationship between Samuel and Nat is a little different from Samuel’s relationship with the other slaves; he has a begrudging respect for Nat that could almost be mistaken for friendship — but Nat remains Samuel’s property, which he makes clear in no uncertain terms. Atrocious treatment of slaves is commonplace in Nat’s life until the day his wife Esther (Gabrielle Union) is brutally beaten and raped by some white men, causing Nat to plan an uprising.

It’s brutal, heart-wrenching material, and to his credit Parker shows considerable restraint when depicting the atrocities. It’s a rough film but not an unwatchable or exploitative one. While it inevitably suffers somewhat from being released in such close proximity with films like 12 Years a Slave, Free State of Jones or even Django Unchained, the film avoids mining the story’s considerable brutality to get a rise out of the audience. Where the film is more broadly “exploitative” is in the script, which emphasizes Turner’s heroic martyrdom above all else. The supporting characters are mostly an afterthought; the film is structured to give Turner a rousing speech every 20 minutes or so. This essentially reduces Turner to a superhuman action hero, seemingly making Parker’s most prevalent filmmaking influence Braveheart-era Mel Gibson.

I understand the problematic nature of complaining that a movie about a person of colour who has suffered through countless atrocities is too nice to its main character — certainly I’m not advocating for a version of The Birth of a Nation that presents Turner as more of a petulant shithead. The problem is not so much in the portrayal of the character but in what the depiction of that character does for the film. The streamlining of The Birth of a Nation gives the project an air of “calling-card” vanity, a sort of feature-length resumé to boost Parker’s career. While there’s a very real and tangible desire to tell Turner’s story, there’s an ever realer and more tangible desire to turn this into a feature-length selfie for dividends down the line. His general reaction to the controversy betrays this as well; he’s refused to apologize and danced around the issue, choosing to stand by the film because it depicts its protagonist with an ideological purity that he cannot possibly match.

That’s the paradox of The Birth of a Nation: it’s a compelling story worth telling, told by a man who, even if he were not probably guilty of a heinous act, would almost certainly be guilty of loving himself too much and blatantly making a film about such a thing. It’s difficult to dissociate all the controversy from the finished product, even if that product was never meant to address said controversy, but the fact remains that Birth of a Nation comes perilously close to simply being a vanity project. ■

The Birth of a Nation opens in theatres on Friday, Oct. 7. Watch the trailer here: