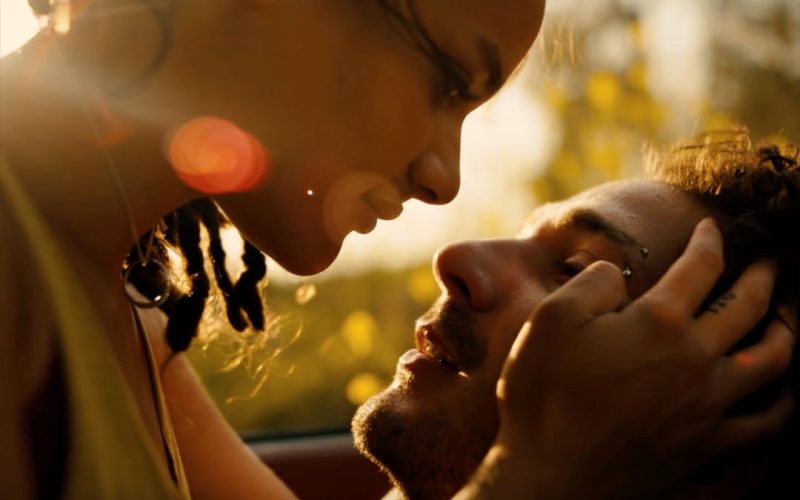 The (now) 21-year-old Texan had no plans to ever do any acting before the British filmmaker (Fish Tank, Wuthering Heights) cast her in the lead role for her film American Honey. Now Lane has spent the better part of this year doing press junkets, conferences, Q&As and red carpets on the festival circuit. When I spoke to her, the film had just hit theatres in Los Angeles and New York. The adventure, it seems, is winding down.

“I definitely have a bit of anxiety with it, but lately I’ve found more peace with letting go and moving on and building towards something else,” she says.

I ask her if speaking about the movie so much has changed her own opinion and vision of it over time.“I still have the same feeling,” she says. “Maybe I feel it a little more. Everything was just personal before and now I can see the big picture, and my conversations with Andrea give me a bit of a different view. But I’m still very much close to it.”

Lane plays Star, a disenfranchised young woman who has become the de facto caretaker for her two younger foster siblings in the “absence” of her foster parents. While dumpster diving one day, she notices a group of people pile out of a van to raid the local grocery store. She catches the eye of Jake (Shia LaBeouf), the rat-tailed alpha dog of the group, who recruits her to join what turns out to be a mobile gang of magazine subscription salespeople. The subscriptions they sell are legit (probably), but everything they say and do to obtain them is born out of yarn spinning and manipulation, a way to obtain the bare minimum required by the crew’s actual boss (Riley Keough) to stay on the team.

American Honey has the feeling of a long road trip, partly because that’s more or less exactly what it was. The film was shot chronologically, with a cast comprised mostly of other actors who, like Lane, had no film experience.

“It’s like a yearbook of our summer,” she said. “I constantly remember the feelings that I had and what was happening each day. A lot of us had never acted before, so how we were feeling that day would sometimes actually show through. It’s like, ‘Woah, man, we’re watching our lives!’”

Lane has a particular vantage point on the job of acting considering it’s something that she had absolutely no concept of, having been handpicked by Arnold rather than cast, say, through an open audition.

“Oh my gosh, everything!” she says when asked what surprised her. “It’s so much work! It gave me such respect for actors and everyone involved in production. The entire thing, I was like ‘Woah, what?!’”

The film is, simply put, exhausting — not just on an emotional level but also on a purely visceral level. Arnold shoots (as she did all her previous films) in 1.33:1 aspect ratio. We tend to associate this ratio to crappy pan-and-scan DVDs from the early 2000s, but here it has a magnifying effect, putting the viewer right up in the protagonists’ faces. Though a singular viewing experience, it’s not the kind of film that I’d call compulsively rewatchable; case in point, Lane has only seen it once.

“It hits so hard,” she says. “Even just seeing the trailers or the ending, that still exhausts me both emotionally and physically. I can’t keep putting that toll on my mind and body (laughs).”

It’s easy to forget, watching the film, that it isn’t a documentary. “Even I forgot!” exclaims Lane. “Andrea created such a world for us: here are your platforms, here are your little bubbles, there’s nothing outside of it. So you were just in it. Even having a camera practically touching my face, being in that moment, you forget. I had a really good connection with Robby (Ryan, the cinematographer) as well, so American Honey we were just feeding out of that. It kinda felt like he was just another homie in the van that was hella close to me!” ■