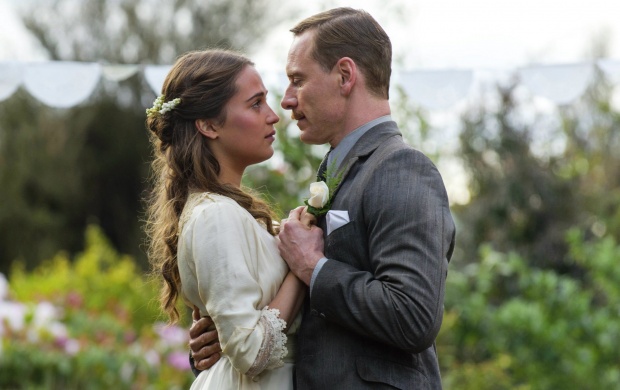 Alicia Vikander and Michael Fassbender in The Light Between the Oceans

It seems easier than ever to predict what movies are going to sweep awards season. Maybe it’s always been like this for those in the know, but it seems like films come roaring out of the gate with the notion of Oscar Material stamped across them.

I’m actually pretty bad at judging these before the buzz develops; last year, I saw Freeheld at TIFF and all but guaranteed it an Oscars sweep even if I was pretty middling on the film myself. It had all the elements of the kind of middlebrow, socially conscious films that make the list every year. Instead, it came out to almost no reaction and fizzled out.

Derek Cianfrance’s The Light Between Oceans similarly exemplifies the “perfect” awards movie: it has “serious” A-list leads, a literary pedigree, a period setting that’s heavy on the quilted cardigans and bonnets, a well-regarded director at the helm and some real emotional material at its core. Everything about The Light Between Oceans points towards it becoming a real awards powerhouse — everything except the film itself.

Australian Tom Sherbourne (Michael Fassbender) returns from WWI and takes a job as a lighthouse keeper on a remote island off the coast of Australia. It’s a good gig for the contemplative Tom, but he soon catches the eye of the boss’s daughter Isabel (Alicia Vikander). They get married and begin their life on the island, a seemingly perfect idyll that is nevertheless tarnished by Isabel’s two miscarriages. During a storm one evening, a boat washes up ashore holding a dead man and his infant. Tom is committed to doing his job as a lighthouse keeper and reporting the death but Isabel, distraught over her inability to have children, convinces him to raise the child as the one she has just miscarried. Four years pass in relative familial bliss, until a trip to the island pits Tom against his daughter’s birth mother (Rachel Weisz).

Derek Cianfrance is best known for his last two features, Blue Valentine and The Place Beyond the Pines. While both pretty different narratively and thematically, they do have a certain rawness of emotion in common — a rawness that’s nowhere to be found in the polite, measured tones of The Light Between Oceans. Cianfrance’s previous films were messy in spots, prone to histrionics and jolts of misjudged intensity, but it gave them a real edge that this current film doesn’t have. Shot in soft, gauzy tones, it has the visual feel of a BBC romance more than a wrenching drama. Consequently, even the film’s most emotionally fraught moments seem kind of muted. It’s the kind of movie where even people who are shouting don’t seem to be making that much noise.

Part of the problem lies with the relatively thinly drawn characters. Towards the end of the film, it’s revealed that Tom is supposed to be around 25 at the beginning of the film, while everything about Fassbender’s performance suggests a repressed older man finally shaking the shackles of war. What seems like shell-shocked reticence turns out to be something more akin to shellshocked immaturity, which changes a lead character some. In the same way, Isabel is first introduced with her father’s friends describing her as a spitfire and free spirit, but once we finally get to know her, she’s nothing of the sort. (In fact, I’m not even sure what she’s really supposed to be, besides sad sometimes.) It makes it excessively difficult to grow to love these characters and love their love when we can’t really even wrap our heads around them. It could be Cianfrance struggling with condensing the book’s arc for the screen (the first scene takes place in 1919 and the last one in 1950), muddling the character development in the process.

The heavy firepower of Fassbender and particularly Vikander means that The Light Between Oceans is always watchable, if not always compelling — they’re both incredible talents working with a director who has great instincts in a project that keeps slipping away from all of them.

With only three features under his belt before he made this one, it’s unfair to pigeonhole Cianfrance’s style in any way and say that he’s out of his depth here. There’s no real “Cianfrance style” that he should be sticking to, and no real indication that he doesn’t have it in him to make a handsomely mounted period piece. Yet all signs point to The Light Between Oceans being a deliberately old-fashioned, restrained and dry drama — a knowing attempt to move away from the expected and show more range. Cianfrance’s previous films crackled with an electricity that The Light Between Oceans simply doesn’t have. ■

The Light Between Oceans opens in theatres on Friday, Sept. 1. Watch the trailer here: