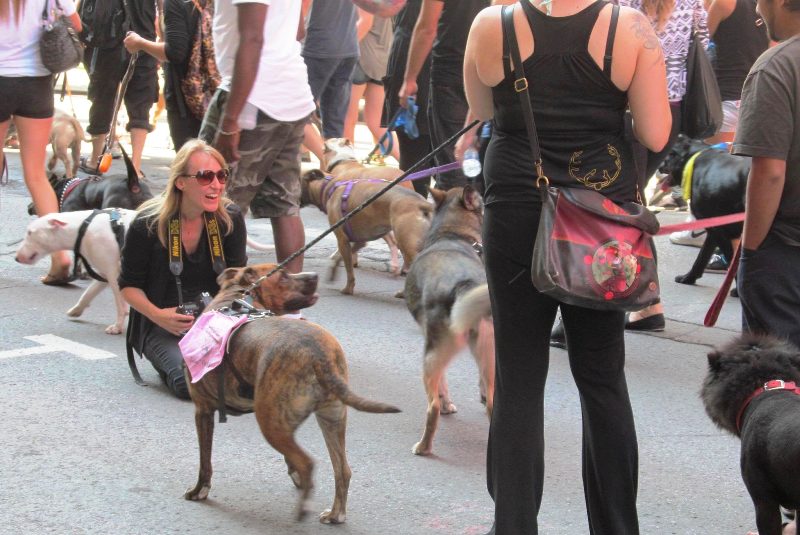 Photographer Chantal Levesque gets up close with her subjects during a Sept. 4 march to protest the city’s plan to ban pit bulls. Photo by Peter Wheeland

When a close friend of mine was attacked and bitten three times this spring by a dog identified as a pit bull, I was horrified and I was angry. Talking to me on Skype from Buenos Aires, she pulled back her bandages to reveal the stitches on her cheek and the deep bite wound on her arm. I couldn’t believe how calm Hélène was when I asked what had happened to the dog. “He’s locked up in his cage,” she explained.

I wanted to hear that the dog had been taken away and euthanized, that the owner had been charged with negligence. Instead, I was told they were talking about having someone else adopt the misnamed Buddha.

The next day, a Facebook friend coincidently posted this article about the pit bull ban in Toronto and how bites had actually gone up even though the pit bull population was nearly eliminated. Naturally, I responded a little angrily:

“A close friend of mine was attacked yesterday by her friend’s pit bull. The dog was friendly on the first night (my friend was visiting), but the next day, while she was in the garden alone, it grabbed her by the hand and bit deep. When she pulled away to go into the house, the dog bit her arm and pulled her to the ground. It then bit her face as she screamed for her friend to help her. (…) She was, needless to say, deeply traumatized and fortunate that she wasn’t more severely hurt than three wounds requiring a dozen stitches. Excuse me if I don’t have any sympathy for a breed that is disproportionately involved in vicious attacks on humans and other dogs. (…)”

Because my friend had been attacked by a pit bull, I was quick to believe — and to cite — the flawed “studies” that appear at the top of a Google search when you enter “pit bull bites.” Number one among these is dogbite.org, which bills itself as a “public education website” but is, on closer inspection, an anti-pit bull lobby that cherry-picks stories and data that back up its goal of eliminating the breed. They even go out of their way to assure owners of other breeds, such as German shepherds, that breed-specific legislation (BSL) won’t affect their pets, even though shepherds, huskies, rottweilers, akitas and even innocent-looking chow chows are among the breeds most often identified in serious dog bite attacks.

Unfortunately, dogbite.org is right, because BSL legislation rarely targets anything but pit bulls. And in the case of the by-law that Montreal city council will be considering adopting this Monday, anything that even resembles a pit bull, or contains even a minor trace of pit bull DNA.

The move to ban pit bulls was initiated after Pointe-aux-Trembles resident Christiane Vadnais was killed by an animal whose breed has ironically still not been reliably identified despite a city-ordered DNA test that is taking a strangely long time to produce results.

When the SPCA ordered a test on another “pit bull” that was allegedly used by a NDG man to attack his spouse, it took two weeks to get the lab report that it was in fact a mix of rottweiler, mastiff and golden retriever. Yet here we are, seven weeks after the city says it ordered a DNA test on the dog that killed Vadnais more than three months ago, just days before council is to vote on banning the breed, and the city’s only “proof” is the lame observation that the “police report of the event in Pointe-aux-Trembles reported a pit bull.”

Pretty much the same thing the police reported in the NDG attack, and just as reliable, considering that even the experts have trouble identifying breeds by visual inspection alone (see chart below).

The Vadnais family has been in the vanguard of the movement to eliminate pit bulls, and I understand their anger. Hélène is the same age as Christiane Vadnais and the only major difference in what happened to them is that Hélène had the good fortune to be rescued by the dog’s owner. But unlike the Vadnais family, Hélène doesn’t blame the breed, she instead points her finger at the individual animal and the owner’s inability to recognize very clear signs of the dog’s aggression. For Vadnais’s sister Lise, however, “We shouldn’t just put them on a leash, we should eliminate that breed!,” she told La Presse.

As in the Vadnais case, the dog that bit Hélène had already attacked other people, but no one did anything about it. It is that fact more than anything else that led to Vadnais’s preventable death. If it turns out that the dog in that case isn’t a pit bull, the ridiculousness of the city’s breed-specific ban should be crystal clear, even to the Vadnais family.

If it does turn out to be a pit bull, however, that still won’t justify the city’s scattergun approach to dangerous dog control, blaming an entire breed for the act of an individual animal. As with human crime, the propensity for one “race” or another to be disproportionately involved in certain types of criminal activity doesn’t justify discriminating against anyone who shares those racial characteristics, otherwise we’d have to bar white men from the Chamber of Commerce.

And as many studies have shown, not only are statistics linking breeds to bite attacks highly unreliable, they are subject to significant fluctuations over time and even geography, as “fashions” change for local thugs interested in having the most intimidating  animals. Dobermans were popular back when Tom Selleck was playing Magnum P.I., German shepherds move up and down the attack dog Top 10 with stereotypical agility, pit bulls are all the rage because their reputation has been blown out of proportion by sensationalist reporting, YouTube dogfight videos and professional lobby groups like dogbite.org.

I was never much of a pit bull fan, linking them with the tattooed tough guys I invariably seemed to see walking them in my Verdun neighbourhood. It was guilt by association. Bad guys, bad dogs, I thought. Then a female friend adopted a pit bull, and I met a friendly little guy who was much more likely to bruise your leg with his furiously wagging tail than he was to harm you with his bite. He’d gently take treats from your hand, but only after he looked to you for permission. With his densely muscled torso and square head, he looked intimidating though, and that was something my friend was grateful for as she walked him at night in her inner-city neighbourhood. That’s when I began to understand that good girls can also have “bad” dogs.

The prejudice came pouring back after Hélène was attacked, however. In the rush to confirm my bias and justify my anger, I let myself be swayed by people with an axe to grind. It took a while before I started looking at the overwhelming anti-BSL opinions and data from a wide range of individuals and organizations with scientific data and real expertise in animal training and behaviour. I began to realize that most of the anti-pit bull info was coming from people who, like me, were blinkered by anger. By the time Vadnais was attacked, I had become convinced that BSL is unjustified, ineffective and little more than a convenient panacea for politicians desperate to look like they were doing something to protect citizens.

Naively, however, I assumed that the city of Montreal and the province of Quebec would also see the wisdom of the experts, including their own, and drop plans for a pit bull ban.

Not even a thorough debunking of many lies and misconceptions about pit bull attacks by Radio-Canada’s Découverte on Sept. 11 (video here) seems to have changed the city’s, mind however. Mayor Coderre seems determined to forge ahead in a Trump-like charge based on emotion rather than science; he’d rather cater to fear than facts.

I’d say it’s in his political DNA, but I’ll withhold judgment until the test comes back at Monday night’s council meeting. ■