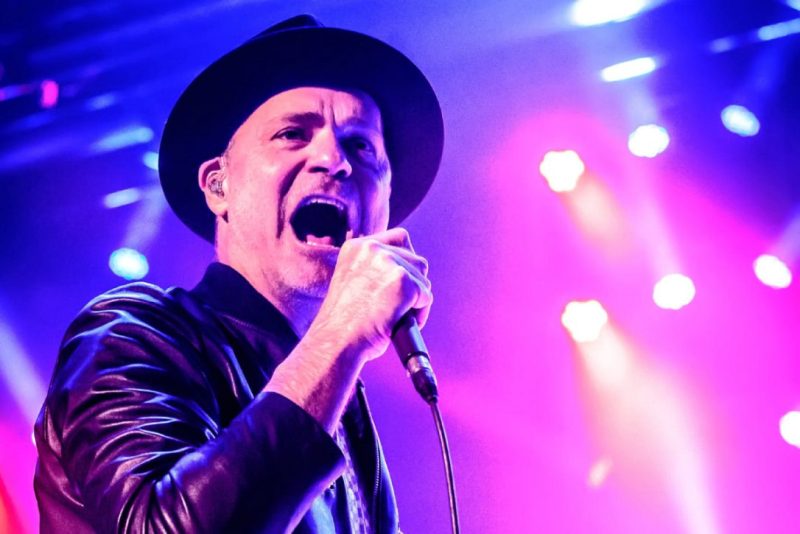 Earlier this summer, when I picked up a copy of the latest and evidently final Tragically Hip record, Man Machine Poem, the first thing that jumped out at me from the sparse design of the sleeve was the liner notes.

The insert, an eight-panel foldout, has a blown-up image of the cover art on one side and a vast, hand-scrawled lyric sheet on the back, a messy spectacle of words, ideas, revisions, rearrangements and red pen that reads, with all its twists and turns, like a roadmap through the beautiful mind of its author, Gord Downie.

My first thought was, ‘This is impossible to read.’ The melancholy factor of knowing these would be the last words penned by this greatest of Canadian poets already made things difficult, but the fact that it’s a puzzle to navigate — there is no real concept of song order to the lyric sheet — is perhaps another clever Downie ploy: “If I’m dying of brain cancer, the least you can do is come along and get a headache with me,” kinda thing.

Then it hit me like a hockey puck to the groin: You know who does things this way? Rappers. I guess at this point in history, some hip hop lyricists are comfortable on their tablet or phone when an idea hits, but I’m willing to bet a lot of writers still scrawl words out, Eminem-in-8-Mile style, with pen and paper as they formulate bars and flow patterns.

While Canada’s hip hop profile has grown thanks to the success of Drake (well…Drake’s profile has grown, anyways), it’s to be noted that we have always had a handful of true blue philosophers on the mic from coast coast throughout our own history of hip hop.

Artists such as Shad, K-os and Buck 65 stick out as some of my personal favourites in the genre, regardless of national borders. Van City’s Rascalz and Montreal acts like Muzion and Narcy have all demonstrated not just hot bars, but whole hearts, in their rhymes. Prairie crew Peanuts & Corn wore that introspective indie badge proudly throughout their early-aughts glory days. Hell, even the grand-daddy of TO rap, Maestro, knew how to tell a good story while making our backbones slide and dropping the needle.

But for longer than we’ve known the lion’s share of the national rap talents mentioned, we’ve had the Hip, their four-four compositions and the sonic imagery of Downie’s deeply descriptive odes to our history’s subtle subtexts.

Moreover, as one of the most magnetic, engaging frontmen ever to rock a stage, Downie has proven for 30 years that beyond being a singer/composer, he is an MC — a Master of Ceremonies and mic controller, and a man, machine and poem as one in the flesh.

With that in mind, here are the top six times that Gord Downie — who does, occasionally, rant lyrics as raps rather than harmonious couplets, despite being known for a soaring, spooky vocal range — has been Canada’s greatest MC of all time.

Breaking through to the other side, the Hip played SNL with an intro by none other than the guy who played Ray in Ghostbusters, leading into the opening strains of signature song “Grace, Too” with Gord’s lyric change. Most rappers boast about being fabulously rich. Gord took the opportunity to name drop his own band, switching to “We’re the Tragically Hip.” Definite hip hop bravado.

Written in his mid-later 20s, today, like many of Downie’s lyrics, it rings as a prophecy. “Courage,” the famous chorus refrains, “It couldn’t have come at a worse time.” But it’s these words — delivered as a soliloquy during the band’s final show last Saturday — that echo hardest today. “There’s no simple explanation/for anything important/any of us do/and the human tragedy/consists in the necessity/of living with the consequences/under pressure.”

Over the years Downie has morphed from shaggy haired beardo, to shorn-headed, conservatively styled English prof type, and more recently into the types of wardrobe usually associated with Kanye West. The sequined suits, the feathered top hats, that motherfucking awesome Jaws t-shirt. Downie, despite his well-known simplicity, has become a fashion icon. That’s hip hop.

Beyond being the most quintessentially Canadian tune ever written, a haunting ballad about a falsely accused prisoner shrugged off for 20 years by an apathetic justice system, “Wheat King” would be a friggin’ excellent MC name for Gord. Gord Downie, aka Wheat King. It has a nice ring.

Gord is standing on stage, I forget which song is playing, and I’m like second row from the barrier. He’s full throttle in the middle of one of his epic rants, which were retired slowly but surely from the live experience over time, but were often the seeds of new song ideas. “Locked in the Trunk of a Car” is one example of a song that was developed from an improvised stage soliloquy — or “freestyle,” ahem, if you will.

This summer night, the spotlight is squarely beaming on Gord as thousands of moths swarm above him, seemingly as rapt in his presence as the fans watching.

He stops mid-sentence, looks up, gives us that wide-eyed stare, and says, calmly and deliberately: “Do you ever get the feeling…. that your head…is a bug zapper?”

Be easy Gord. You’re a real machine, sir. May the angels guide you. ■