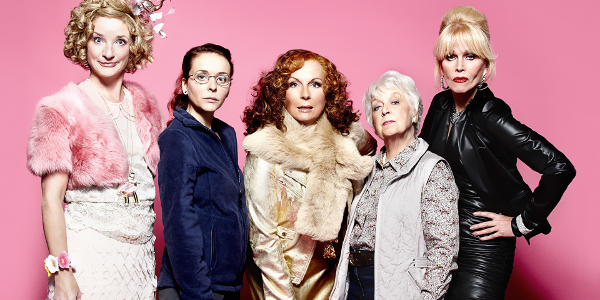 Pondering how to review Absolutely Fabulous: The Movie, the feature-length film based on the hugely popular TV series, one has to take demographic breakdowns into consideration. If you’re queer and/or British, then background info or a basic synopsis is probably unnecessary. If you’re a woman and share that dark, cynical sensibility with many bitchy queens, you’re probably also on board. (A simple question would be: how often do you get wasted with your gay buddies? If it’s once a week or more, then you know Abfab.)

And if you’re a straight man, I can safely predict that you didn’t get past the headline of this review and aren’t even reading this.

Similar breakdowns will occur within the Abfab-familiar group: if you love Abfab more than anything, you’ll probably be so happy to see the crew back together that you’ll be able to see past the shortcomings of the movie. But if you’re somewhat less than a hardcore, diehard groupie, much of the film will feel lacking.

The basic premise itself is one of the best things about the film (and one of the reasons the trailer looks so tantalizing): Edina Monsoon (Jennifer Saunders, the show’s creator and screenwriter of the movie) is facing an economic apocalypse, and in order to try to revitalize her PR career, hopes to enlist supermodel Kate Moss as a star client. At a party she attends with her fellow souse Patsy (Joanna Lumley), she inadvertently knocks Moss off a balcony, killing her. Edina is immediately branded as the woman who has killed the fashionista legend, and she and Patsy are on the lam for the rest of the film.

It’s a fantastic, hilarious set-up, allowing Saunders to imagine disguises, extended chase sequences, get-rich-quick schemes — all of the things the brilliant duo Patsy and Edina are custom-built for. Abfab being the legendary bit of pop culture that it is, people were lining up to make cameo appearances, including Joan Collins, Stella McCartney, Dame Edna, Jon Hamm, Jean-Paul Gaultier and Jerry Hall, to name but a fraction of them.

There are some great bits and pieces scattered throughout the film’s 90 minutes, but not quite enough to make for a great adventure at feature-length. That being said, this is one of those instances when I would urge fans not to wait to watch it on home video; part of the fun of watching Absolutely Fabulous: The Movie would be to see it on the big screen with a large, enthusiastic crowd, and preferably after a few cocktails. At least some of the excitement of being a fan is feeding off the enthusiasm of other fans (in this case, like-minded, boozy ones) and certain genres (most notably comedy and horror) are so much more enjoyable seen with an audience.  So try to take this in during the opening weekend and go with fellow Abfab freaks.

While not perfect, the Abfab movie certainly reminds us about what made the original series so brilliant: brazen political incorrectness, characters who continually embrace depraved debauchery, the camaraderie between Patsy and Edina and — in what I find the most rewarding abrasive relationship among the characters — the tortured mother-daughter bond between Edina and Saffy (Julia Sawalha).

If it doesn’t always feel great, it feels good. The Abfab movie creates the sensation of catching up with dear old drunken friends who we blacked out with more times than we can count. And that’s a happy feeling I can drink to. It’s not perfect, but still worthwhile. And Christ knows, there have been worse crimes. Cheers, sweetie. ■