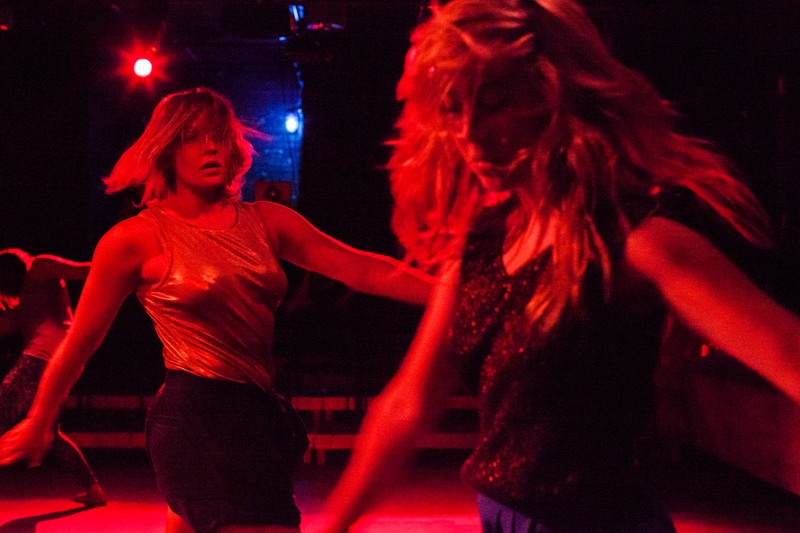 Toronto dancer and choreographer Amanda Acorn brings Multiforms to Festival TransAmériques this weekend. The piece explores “being outside comprehension around language and magic,” “returning to the body and its most basic instinct.” Influenced by painter Mark Rothko’s idea of “implicating the viewer” and the “sensitive observer” on a round stage, inviting the audience to create our own vision of the performance and bodies in constant movement.

James Oscar: I read about this idea of abstraction you’re interested in. So rather than representation, you’re hoping the viewer might plunge into an open field of perception. Were hallucination and trance part of the conception of this show?

Amanda Acorn: This idea of abstraction and kind of trying to get away from representation was a way of dealing with a problem I was having in my work, something that was conflicting for me, and so I began with a question: Is it really possible to transcend these habits of ascribing language to things and seeing a represented image even if that is not what is intended? Also, is it possible for the viewer to stop seeing a body, and is it possible for me as a viewer to lose track of myself and my body?

I would say that trance and hallucination are produced through the way we’re working. There are probably plenty of other ways to work with the body in a way that is abstract, getting away from a representative depiction of the body on stage. But that is definitely present — there is the effect of being pulled into this trance-like state, and that state lends itself to your ability to escape a space.

It was not my main intention in making the piece; again, it was a product of how we worked, and because I was interested in creating immersive space with the sound and the light. Those elements in conjunction with the movement vocabulary contributes to the effect of being hypnotized. 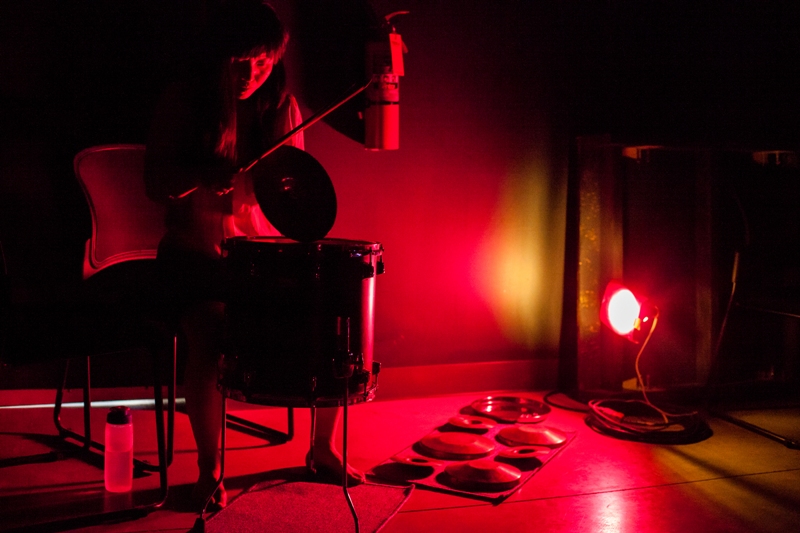 JO: It seems part of your mission is to implicate the viewer in what they are seeing and doing, that there is a kind of provocation.

AA: The word “provocation” seems a bit aggressive. Maybe I’m inviting a certain kind of participation and mostly through the frame of the space and the environment that is created, and then of course there are also the choices that are made in terms of the structure. I’m not sure I could say I don’t have a desired impact in mind. I don’t have a problem with things that are long and boring and have a lot of space in them. I really actually love this, so I suppose this aspect could be a kind of provocation to invite people into something where you have to work a little bit.

The piece is only 60 minutes, but I certainly don’t think it’s pointing directly to things. And so there is this kind of participation, invitation, implication — that’s why I chose to have the show on a round stage. The audience is seated on four sides and the sonic space is meant to be quite immersive, too, being enveloped by that. One of the musicians is in the space performing live and then another musician is mixing a sin-wave kind of drone on his computer in relationship to the other artists. So these kinds of huge considerations around the environment feel really important for that. There is the desire to implicate the viewer rather than leave you in the dark far away and at a distance. There is this proximity to what’s going on, not only visually, so it becomes a multi-sensorial experience. So it’s also the way we are treating the space with light and sound.

JO: Do you stand up during rehearsals to say this or that is working? Do you put yourself in the viewer’s place to see what is going to bring us into that kind of trance?

AA: The piece is an iteration of a solo I did myself initially. When we were working towards the premiere last summer, my concerns felt very formal. My concerns were much more subjective, because I was not performing. In the solo, I had created  this way of moving with improvised repetitious patterns, and once we were working on that, all the choices we were making were around choreographic structure, and now I’m in the piece again. I’m both in and outside.

AA: Yes, I’m occupying two positions. This is my experience from inside of it and then I will step outside of it and try to be somewhat objective again, thinking about things like arcs, how we want energy to build in a real formal way. But I don’t know when I do that if I’m thinking about the way it will be perceived by others or if  I’m just doing things I like or choosing thing that work for me or trying to clarify the thing.

JO: How do you go about going in the dance and outside of the dance. Do you still feel the joy of entering into this ritual? Do you feel like you have to watch what is going on? Are you able to let yourself go?

AA: I’m hoping I’ll get there. Right now we’re still constructing and making some changes and stuff and I’m working with a rehearsal director. So I’m hoping that as time goes by I will be able to let go of control and stop thinking about things I forgot to do. Hopefully soon, I can allow myself to be in a position of being a performer that is on the same plane as everyone and make decisions about what needs to happen. I’m working on it.

JO: In your piece there is a repetition of movement, which is very common in rituals. Is this a kind of contemporary ritual?

AA: I see how it might be similar to a transcendental experience. I guess I think of the act of going to the theatre, going to the performance in a shared space with people as a ritual regardless of the content of the work. I wasn’t working on this as part of the concept.

JO: Looking at the trailer, the dancers’ circular movements and something that look like whipping. Is this meant to evoke self-flagellation?

AA: Any of the movement patterns present are byproducts to be continually in repetition, the necessity to continue moving in the piece.  We’re working on different ways of movement and sequences, and  moving in a circular pathway is the movement pathway that lends itself most to easily to something that can continue and change. We’re also working with different ways of repeating things,  with more pure repetitions that don’t have that circular looped pathway. But the movements are not chosen intentionally by me. We are working on a practice that is shared but the vocabulary that they are doing is individuated. Each performer has their own approach or way of digging into this way of practice of this continuous repetition, and  the looping and circular pathways are certainly one of the strategies. There are other strategies also, but this kind of pathway through space is most logical and useful because there is a momentum, there’s a peak but there are also motifs that appear like shaking movement, pulsating movement, and they don’t have anything to do with any reference to anything else other than the fact that we are trying to attain this thing of moving continuously for an hour. This whiplash is a sequential movement moving through the spine and the whole body, in repetition. There’s a lot of hair tossing. 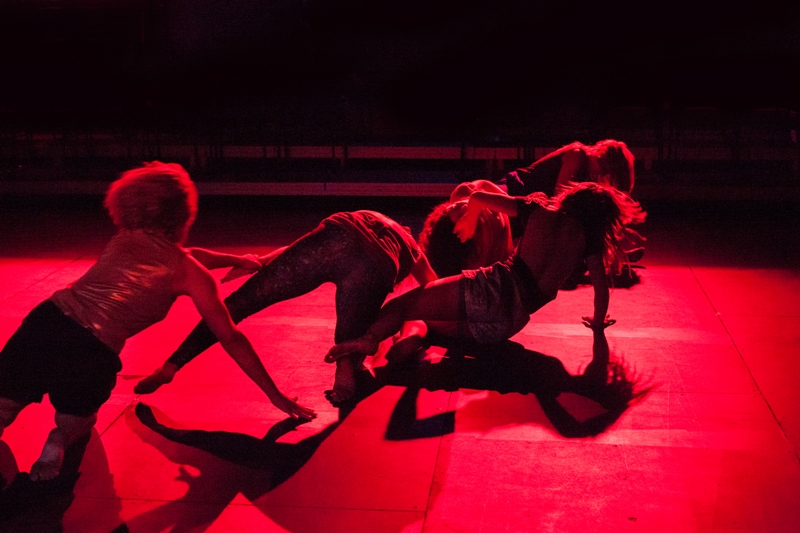 JO: And I guess at the end of this, there is exhaustion — dancing  and moving till exhaustion. Is this exhaustion a kind of ascension to another plane?

AA: We’re pushing up against our limitations to see what can emerge out of that; things that might not be known to you or things you can anticipate. And this is a really nice space to be in, because the piece is improvised and we’re working as both structured and open. Whatever that exhaustion produces becomes part of what you’re doing, it’s not something you need to try and hide or suppress.

JO: What could that offer to the viewer since he/she is not dancing?

AA: I think it could offer the duration. There is a kind of “exhaustive watching” required. Because there’s quite a bit of space in the piece and in and the attention that is asked. This gives space for you to ask questions and have your own opinions, experience, interpretations. That can be demanding on the spectator. And I think boredom is probably present in that equation also for some people, which I am totally okay with.

JO: Can you speak about opening up a space beyond language, looking for subtler languages? The piece seems to be an open tableau of self-questioning  and self-visioning. For many audience members, this could be the first time going to a meditative performance “beyond language.”

AA: I am not sure if this “beyond language” is possible. I guess it is a question that I have and something I’m interested in striving for. Like what’s beyond what’s known, what’s beyond what we think is going to happen and that’s what’s interesting to me about it. It could be a questioning that shows the piece is not a finite thing we’re trying to achieve. The bodies of the performers are in a state of questioning the whole time and also there is this idea of being active in terms of not knowing all the time.

It is very clear what we’re working on, on  stage. We have many jobs to do but there is an ambiguous and perhaps confusing space. Questioning what we’re doing is a very active kind of state and maybe it is similar to what the viewer experiences, in that there are things that come up beyond comprehensible ideas of space. It’s a sensorial experience. It might be emotional, it might be spiritual for different people. Without naming the thing or trying to define it too much, there is space for all that stuff. And I’m not sure if we’re achieving all of that but I’m interested in looking at this.

JO: As you said at the beginning of the interview, it becomes about more than just seeing a “body” on stage. What are some of the forms in these “multi forms” that people have seen?

AA: The audience has talked about visually zeroing in on very specific parts of the body or being lost in that.  Some people have talked about an evolutionary kind of thing they have seen. Some have felt the performance comments on feminism since it’s five women on stage. Some have seen it as commenting on labour and capitalism because of this constant generative action on stage which is relentless. So I think the variety of interpretations can be quite vast.

JO: Caribbean philosopher Edouard Glissant says that sometimes when we perform on our own, we are just delirious and mad people striving for a community. Does this ring true for you and your work on this piece?

AA: In the studio, alone, I find it challenging. I don’t hate it. I was desiring to be with people. I have been in many collaborative experiences, but this is my first time leading one of them. I was also curious about how it might say something different than when I was doing it alone. The structure is set in terms of a sequence of events, pockets of time, so the whole piece, everyone is in collaboration the whole time. There’s this necessity in maintaining this connection between dancers, musicians, lighting designer. The lighting design is live during the show. All dancers and musicians are also working this way. So it is a live, active way of working with space; grounded but still open. ■