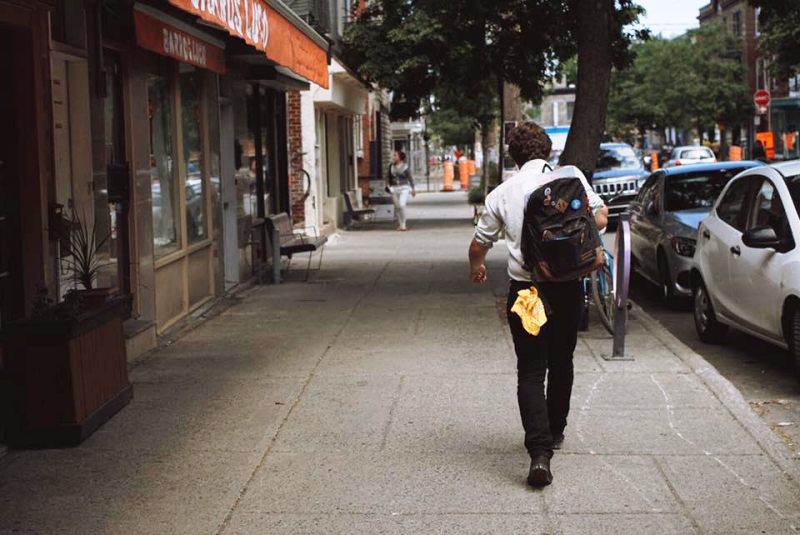 Though he’s been living in Montreal for just two years, Kitchener/Waterloo native Andy (Commander) Clark has become a well-known fixture on the local music scene, fitting in gigs with a variety of collaborators and a day job postering the town with show fliers for Blue Skies Turn Black and other promoters.

Tonight, Wednesday, June 22, Clark will be setting aside his wheatpaste brush long enough to put on a show of his own: a launch party for his new album Mitchell,which will be the inaugural release from brand-new local label Second Best, from partners Charles Bourassa and Ilya Pauly.

“The songs on Mitchell are all about dealing with moving here and leftover feelings about the past,” Clark tells me. “It’s named for Joni Mitchell, who’s my huge-est influence these days. She never stopped doing her own thing even when people hated it and insulted her. She’s really inspirational!”

The Joni Mitchell influence comes through Mitchell from the opening track, “This is the Way It’s Going Down,” an acoustic number about persevering in the face of disappointment. Lest you get too comfortable with such prettiness, however, the album quickly veers into other directions where Clark’s numerous stylistic influences can be felt, from At the Drive In to Arcade Fire to Eric’s Trip, to name just a few groups cited by Clark as longtime inspirations. Other album tracks like “The Line Cook Gospel” have a country feel while the grooving guitar picking on “I Was Right” has a Dire Straits flavour. Jangly guitar rhythms, ringing keyboards, funky basslines, grungy garage and psych, metal and punk elements all find their way into the record.

Clark, the son of professional organists, lives and breathes music — he plays multiple instruments, and has been writing songs and performing since his teenage years, cutting his performance teeth playing house shows in southern Ontario. A move to Montreal in 2014 brought a much-needed change of scenery and the chance to be part of what he calls the best scene in Canada for music and culture.

“I moved to Montreal because of the music,” Clark explains. “All the bands that I knew that made me cry and really think about life were all from here. I saw Braids at Osheaga in 2011 when I was on vacation and it changed my life. The album Visions by Grimes, and all the Arcade Fire albums were important to me. I think people have burned out in a way on that band, but I still love them no matter how popular they are. That music really helped me a lot. When I opened for Sam Patch, it was really important for me.”

Going to shows in Montreal nearly every night when he first arrived, it didn’t take very long for Clark to meet some of the music scenesters he now collaborates and works alongside with, including several artists affiliated with the Oh Hi collective (who will be adding Mitchell to their catalogue as well), plus his bandmates, bassist David Mitchell (Gulfer, Stack Your Roster) and drummer Alexander Thibault (Gloze).

“I try not to waste their time,” laughs Clark. “I can’t be messing around with these people. They’re so talented. It’s awesome to play with them but also scary because they’re so good. I had to up it, and go from being a slacker kind of guy to being like ‘here are the songs, here are the arrangements, we gotta do this.’ It’s a huge honour and a huge pleasure to play with them.”

Musically, Mitchell pulls from many different influences, but the lyrics are all rooted in Clark’s personal experiences. Confessional, emotional and at times humorous, Clark sings about memories of the past and dreams for the future, of lost love and sadness, and of life in Montreal with references to familiar spots like the winding paths of Mount Royal.

“Lyrics to me are extremely important,” Clark says. “At their best, lyrics can save people’s lives and save their minds. You can really help people. I want to bring hope and energy to people’s lives. That’s my goal as an artist — besides having fun and making music I like to listen to. The best way to do that in rock music is through lyrics.

“My lyrics are very personal. There’s this video game called Legend of Zelda: Majora’s Mask. In the game, you have to play the song of healing for all these spirits and they become masks, and then you wear them to get by in the game. I look at songwriting in the exact same way. I’m taking in an emotion or something with a spirit, and then writing it down on a piece of paper and that becomes a mask that I wear on stage, that other people can also put on their own face too if they want.

“Some of my lyrics are depressing, about lost love and things like that, but a lot of it is about time and just being at odds with things. I really want to make my music have a purpose in people’s lives, so they can listen to it and find solace. That’s where my lyrics come from. It’s very emo! It’s for people’s emotions, but I also try to have lines that are kind of funny, too, so it’s not all so serious.”

For the album launch show, Clark has invited a number of electronic and drone acts to perform sets, including Mystic Gohan, Witnessing, Dried Leaves and johnny_ripper. Snacks are being prepared by Beaver Sheppard, and CDs and zines will be available, including Clark’s recently released zine Avant Garden, a comic book about noise-rock playing talking vegetables, set 20,000 years in the future.

As one of the first DIY venues Clark discovered as a new Montrealer, the space holds a special spot in his heart. “When I first arrived, I didn’t know anybody and I was going to shows on my own,” Clark says. “I remember going to the Plant for the first time and it just reminded me of my home, the environment I spent a lot of time in. That’s why I’m doing my album release there, because it’s expressing where I come from.

“The Plant is like a home for a lot of people,” he adds, “so it’s going to be a get-together basically, with some good music and records for sale. I have a really good home here. I’m really blessed!” ■

Commander Clark launches his album Mitchell at the Plant (secret location) on Wednesday, June 22, 8 p.m.,$5 suggested, $10 with download, $15 with CD.