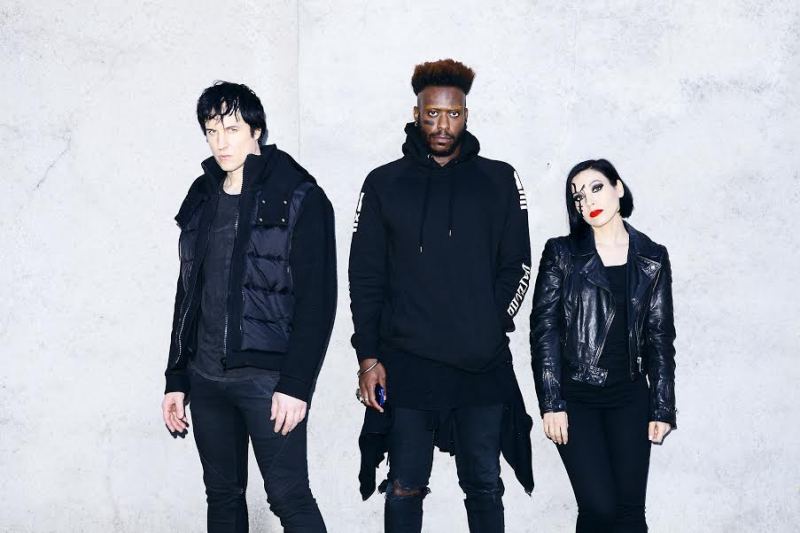 From the flashing screens to the purring processors, the droning software to the mastery of their consoles — there’s plenty that hackers and electronic musicians have in common. At least that’s the conclusion that pioneering techno artist Alec Empire has reached.

It’s a finding that many music buffs may find baffling, considering the decades-long row between many artists and hackers over copyright infringement. But, like a retooled computer synchronizing with once incompatible software, Empire and his beloved digital hardcore band Atari Teenage Riot are more than eager to connect with hackers at this year’s REcon fringe tech fest, which has officially dubbed as a “reverse engineering conference.”

We recently spoke about how electronic musicians and hackers can fight the power.

Kyle Mullin: What prompted you to put on a show at REcon?

Alec Empire: I started making electronic music at the end of the ’80s in Germany. We musicians were close to the Berlin hacker scene in the beginning. When techno musicians needed new software, we’d turn to the hackers. It was a close community — to be honest, it was almost the same group of 50 people going over these things again and again (laughs).

Electronic shows now typically happen in clubs or at festivals, and have very little to do with the smaller fringe scene I came from. So whenever there’s a chance to play this music in a context where these worlds — hacking and techno — connect more, I’m excited to do that.

KM: How do you think those worlds lost their connection?

AE: The hacker scene has a lot in common with guys in the music scene. But now there’s a division over piracy. In the past two decades, there’s been hostility from the music scene towards hackers. They’re depicted as criminals. But the only solution in the future is to come up with better ways for music and the internet to integrate. If all the outsiders connect more, we’ll have more conversations and achieve more together.

KM: How do you want to work with hackers more?

AE: There’s huge potential. We see the media as only interested in sensationalistic stories that distort stuff. It’s important that musicians translate some of hackers’ ideas into thinking, and communicate that to people who are not part of this world. Because I feel like the hacker world is very closed off. Some of them get the limelight and become spokespeople, but only for a little bit. Like Julian Assange— where a lot of people praise what he says, but then he gets criticized for other stuff. A lot of the time the debates in the hacker community don’t even reach the outside world, because there’s a lot of diversion on the surface, and on top of that there’s a lot of division and ego within that world.

KM: Why do you think more musicians should work with, or even speak for, hackers?

AE: Since 9/11 and Napster, the music industry has became more conservative to protect the sales. No one wants to piss off fans, and if you say something that needs to be said you might lose followers on social media. Musicians are like the worst mainstream politicians at this point: they say nothing. Music that has something to say was always the most exciting, be it music from the early Civil Rights Era or early punk or hip hop.

So now the music industry is being torn down by piracy. Now we have to build something new. If electronic musicians work with hackers, then we can start a new era. Music is a powerful medium; we can reach people on an emotional level.

I’ve spoken to many hackers who saw Atari Teenage Riot’s music video that depicted computer geniuses hacking into the system in Wall Street — a lot of hackers told me: “I saw that when I was 14, and that encouraged me to do what I do.” It’s fascinating that they see something or hear a piece of music that helps them do what they want to do rather than what their parents or peer group expect.

KM: What do you hope will happen next?

AE: What’s very important at this point is not focus so much on attacking the big labels. Focus more on empowering the individual musicians. Like copyright: it should empower musicians, not corporations trying to own things. People think copyright is always evil, but we’d need to find something better to replace it.

I like how more and more young musicians are saying: “No, I’m not going to put up anything on the Internet, because other people take my shit and put an ad in front of it.” Maybe I’m more romantic about the way things used to be 10 years ago. It was a Wild West. I thought it was better when people visited individual websites instead of checking everything through Facebook. I think all that concentration has had a negative effect. YouTube and Facebook reps talk like they want information to be free. Then musicians say: “That’s cool, but I want to control whether or not you put a fucking Prius ad in front of what I want to get across, because it really corrupts what I want to say.” The only thing that can change that is if the right types of musicians get in touch with hackers. I’d like to see them do what businessmen have done with Bitcoin. I’d like to see them take out the middle men. ■