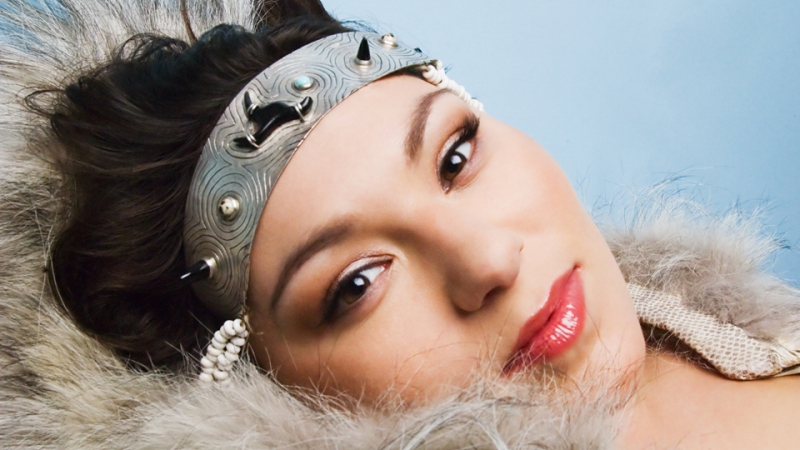 There is no show like a Tanya Tagaq show.

The renowned Canadian vocalist has played quite a range of venues over the span of her career, from the darkest dives to the most prestigious concert halls. After a decade and a half of playing, producing and winning awards for her own music and collaborating with such artists as Björk, the Kronos Quartet and Mike Patton, her path has led to a pair of performances playing alongside the landmark 1922 film Nanook of the North at Montreal’s Place des Arts this weekend.

The primal emissions of her signature variation of Inuit throat singing and her soaring, grinding accompaniment — all of it improvised with her band members Jesse Zubot and Jean Martin — can at times be highly sexual or deeply frightening, or both. It is powerful stuff that has the ability to put the fear of God into uninitiated normals, like the kind who fled the scene of her set at last year’s outdoor afternoon show outside Toronto city hall. But it can also mesmerize, seduce and stir up a range of strong emotions, particularly when coupled with a social and political message.

That’s what happened when Tagaq played the Polaris Music Prize Gala, also in Toronto, in September of 2014. She was the last performer of the night, and minutes later she would win the $30,000 prize for her album Animism. As she performed in all her passion and fury, the names of 1,200 murdered and missing aboriginal women scrolled on a screen to her right. Watch the video here (and don’t read the comments):

This performance happened during the dark days of the Harper Government. Now that a new administration has promised to finally open a long-awaited inquiry into crimes against native women — which, this week, the Native Women’s Association of Canada suggested could be more than double the RCMP’s projected number of 1,200 — I asked Tagaq if she has hope for the resolution of this issue and the future of aboriginal people in Canada.

“The system in place is pretty rotten,” she says. “It’s time to start building a better relationship and that will start of course with damage control and education for the rest of the country and within our communities, to unravel the damage that has been done over the last couple of hundred years. It’s going to be a big journey but if we work on it and raise awareness and people start to understand why the statistics are so bad then we can begin to move forward and at the very least stop the bleeding. It’s been a long time coming.

“I am feeling a lot better, because speaking out on native rights now seems to be a socially acceptable thing, whereas when I was a younger woman, people would just roll their eyes at you. I think that people are slowly becoming more aware of what’s happening and once the social consciousness awakens, it becomes distasteful to spout old racist beliefs. That’s when change will come.

“Not so long ago you weren’t supposed to be gay — that was the worst thing that could ever be, but now with the younger generation especially, it doesn’t even matter anymore.

“I was at the Holocaust memorial in Berlin and I thought, wouldn’t it be lovely if Canada had a big memorial for all the children lost in residential schools, and the way that people are forced into poverty under these circumstances at the hands of the government. It’s very important for people to understand how and why we got to the place where we’re at.

“Change is incremental — it happens, you just keep pushing and it happens. I don’t understand the mechanics involved with politics as much as I should but I do have a lot of ideas about solutions that can help instead of just draining resources into a system that isn’t working. Hopefully people will just begin to listen.

“Creating empathy for each other as human beings and Canadian citizens is key. There have been many frustrating roadblocks but it’s not something that I’m willing to stop talking about or give up.” ■