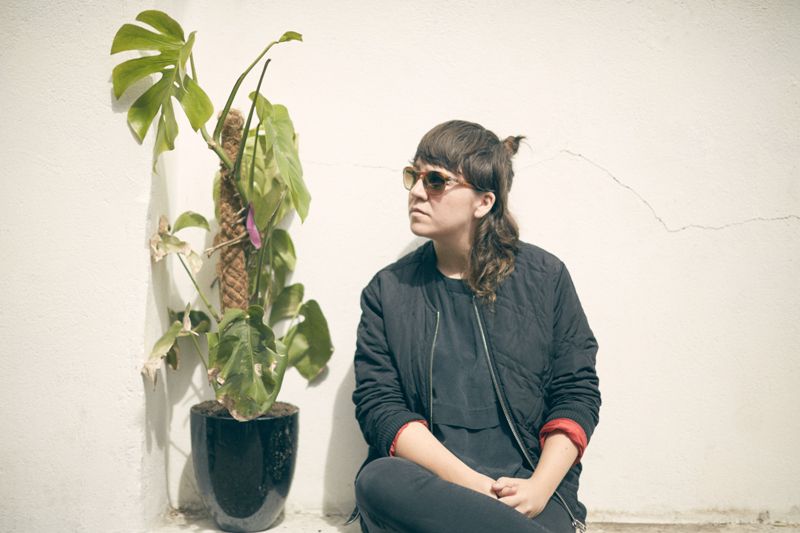 It’s been nearly two years since Montreal producer and songwriter Marie-Hélène L. Delorme — stage name Foxtrott — graced the cover of Cult MTL alongside three other figures of the local music scene. In that time she’s been working on the follow-up to her Bandcamp tracks and her Shields EP, and that LP — titled A Taller Us — is launching this week, being released by U.K. indie label One Little Indian.

“I took a lot of time alone,” says Delorme about her creative process. “I worked on the production mostly in the city, but for lyrics I like to go in the country and just space out. That demands a little more focus.”

Composition and production go hand in hand for Foxtrott, and Delorme recorded the bulk of A Taller Us in her own time at a home studio within the Van Horne Street loft she used to live in. Coincidentally, the producer she connected with to record her vocals (Damian Taylor) lived just two doors down from her at the time, so the record is truly a “Mile Ex” production.

But if you’re wondering what it sounds like, or what style of music it is, you’ll have to press play. Like most modern music, particularly of the independent, “alternative” variety, her sound eludes easy categorization.

“I really, really suck at that question — I’m the worst,” says Delorme with a laugh. “What I can say for sure, though it’s very vague, is that it’s pop music, it’s songs with verses and choruses. It’s not experimental in that way. And yes it is electronic, but I produce in a way that’s more similar to hip hop than electronic music. I don’t write four on the floor dance music.”

Though listeners won’t necessarily bust moves to Foxtrott, the bold vocals and beats on songs like “Shaky Hands” and “Beyond Our Means” are unlikely to leave you standing still either. Dancefloors have been known to develop at her shows, where she’s joined by a French horn player and drummer, from London to New York to Montreal.

“The show last week in New York was really fun,” Delorme says, recalling some of her favourite live dates. “Baby’s Alright is such a nice room, and it was packed, it sounded really good and people reacted quite strongly. With New Yorkers you never know because they’re so exposed to everything, sometimes it’s tough to get them excited.”

Another live highlight for Foxtrott was a late show at Club Soda during the Jazz Fest, an experience she’ll soon reprise with a show during the Montréal en Lumière festival.

“It was really fun to play there because I had a bit more freedom, more production values — I had lights and sound and dancers. I feel lucky to be able to play those shows here it allows me to try things that I can’t necessarily try at a small show or a show in another city. I’m really looking forward to doing that again, and going further with it. It’s going to be really fun for me creatively.”

Another avenue she’s due to explore next year is production for other artists. “I’m going to try to keep that side of things very active ’cause it really makes me happy.”

But A Taller Us is all Foxtrott, with no appearances by special guests.

“I wanted this record to really be 100 per cent my sound,” she explains. “I felt like once I did that I would be more open to collaboration. It’s easier to open the door to other things when you know a bit more who you are, so now I feel like I’m getting to that point. It’s exciting for me.” ■