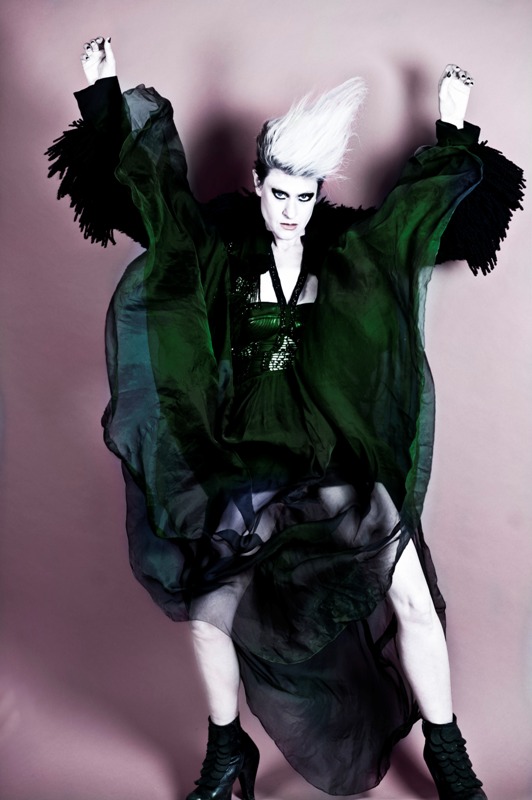 Rub is the first Peaches album in six years.

In that time, the Toronto-born musician and performer (aka Merrill Nisker) starred in a one-woman touring production of Jesus Christ Superstar, acted in the film Ivory Tower (alongside members of her old crew, Feist and Chilly Gonzales, as well as Tiga), toured film festivals with the musical/concert film Peaches Does Herself, produced a Taiwanese all-girl band called Go Chic and appeared in a book of photography titled What Else Is in the Teaches of Peaches?, a reference to her 2000 breakthrough song “Fuck the Pain Away.”

After doing the three-year recording/touring cycle four times straight through the aughts, Peaches is back from her mini music hiatus with a tightly wound rap record, its cold synth samples, electronic beats, robotic rhymes and melodic trills serving up her favourite themes: sex, gender reversal, phonies and revolution.

As with her last album I Feel Cream, there’s a video for every song on Rub, including “Dick in the Air,” wherein Peaches and comedian Margaret Cho walk around L.A. in “mohair naked outfits” meant to rep an old white man and a young Asian man, complete with penises. (The video was partly inspired by My Most Secret Desire, a 1995 comic book by Montreal artist Julie Doucet about what it would be like to have a dick for a day.) Another standout is “Light in Places,” featuring German performance artist Empress Stah.

“That was the first song that I wrote for the album, in Berlin,” says Peaches, who made the bulk of the record
with producer Vice Cooler in the city where she now spends the other half of her time, L.A. “[Empress Stah] asked me to write music for this project where she does an aerial routine with a laser buttplug, and she gave me a couple of
words, like ‘stargasm’ and ‘iconoclast’ to work with. It was a challenge for me — it’s very different, but still a very
Peaches track. I got to show my love for Giorgio Moroder. I also liked the politics of what she was doing and of course the visual was phenomenal.”

Peaches concerts over the years have ranged from one-woman “karaoke-style” acts to more conventional rock
shows with a full band, enhanced by shocking costumes and theatrical showmanship. After touring as a DJ (another
thing she tried out in recent years), Peaches is going back to basics.

“I’m gonna have two really awesomely slutty dancers with me — Agent Cleave and Jess Daly, they’re both Australian — and I’m gonna use the DJ decks as my instruments, playing my own songs. It’s a bit of a fuck you to male DJs who stand there like [puts on Jian Ghomeshi voice] ‘Yeah, I’m the DJ.’ I used to say this about electronic music, too: there’s a lot more you could be doing, you don’t need to just stand there. So I’m doing everything: I’m DJing and singing and jumping around and dispelling the myth that DJing is very involved. I’m gonna focus on interacting and performing — I have some tricks up my sleeve.” ■