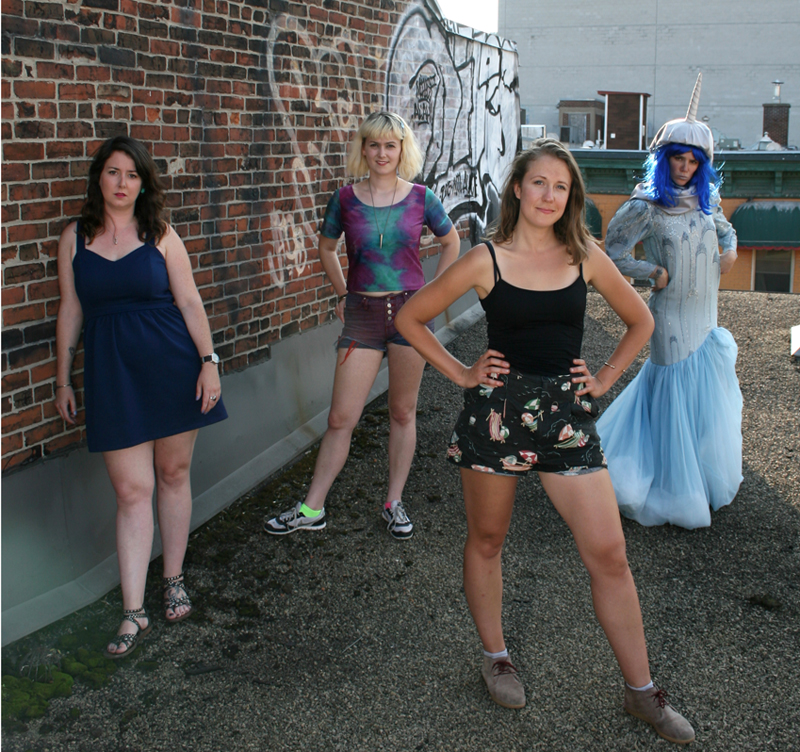 What do you call a narwhal (those mysterious unicorns of the sea) that’s five-and-a-half feet tall, female as fuck and funny all over? Call her mascot of Montreal’s new festival of women in comedy — Ladyfest — which launches its inaugural edition this weekend (Sept. 4–6) at Théâtre Sainte Catherine. You may have already seen her toothy grin greeting you from Ladyfest posters around town; in real life, the friendly narwhal is animated by festival host Lise Vigneault, who will emcee the festivities in full narwhal regalia.

Why a narwhal, you might ask? As if unicorn of the sea wasn’t enough reason on its own, Montreal’s funniest women find the narwhal mighty relatable given the mythical beast-like scarcity of woman-headlined comedy shows around these parts. Once you factor in the lesser-known tidbit that the proportion of female narwhals that grow tusks (about 15 per cent, compared with nearly 100 per cent of the males) more or less correlates with the proportion of women-fronted comedy shows that make it to the stage today (a quick look at the 2015 Just for Laughs programming revealed that just 18 per cent of the shows featured women headliners), you can see why the narwhal is the perfect animal companion for a festival that aims to create greater opportunities and visibility for women who bring the funny.

Ladyfest will be Montreal’s answer to the growing network of women-in-comedy fests across Canada and the U.S., including Boston’s Women in Comedy Festival, Portland’s All Jane, Chicago’s Women’s Funny Festival and Toronto’s SheDot — Toronto’s Festival of Funny Women — all of which have cropped up in the past six years.

Organizers Katie Leggitt, Lar Vi and Erin Hall of Women in Comedy Montreal have been putting the pieces in place for the past eight months, encouraged by packed houses and enthusiastic support from audiences and performers alike at affiliated events such as their monthly Hey Gorgeous! stand-up nights and a packed-house panel discussion on the topic of women in comedy held during this summer’s Sketchfest.

“The response so far has been nothing short of amazing,” Hall says about the support this year’s Women in Comedy Montreal events have received. “It was one of the best-selling nights during Sketchfest.”

“The community has really grown over the last couple years,” Leggitt adds, when discussing the motivations for creating the festival. “We wanted to create more opportunities in order to build the community, strengthen it and bring people together.”

Bringing people together, as the organizers are quick to point out, is an inclusive objective that stretches across gender lines, as evidenced by the mixed audiences from across the gender spectrum that have been making up the crowds at Women in Comedy Montreal shows.

“Men come, too,” Hall tells me. “The difference is that there’s this energy — a really supportive, fun vibe that’s happening. I didn’t know that that was going to happen before we started throwing these events. Sometimes comedy shows can get kind of angry, and there are hecklers. That is not the vibe [of our shows]. This is a supportive environment. With everything that we’ve been doing so far, the vibe has been, ‘let’s have a good time and be cool to each other.’”

Those who are down with that and want to check out a show will see some familiar faces (and narwhals) among the line-up of performers at Ladyfest, including Cult MTL’s June 2015 cover girl Tranna Wintour, plus the Blue Dog Motel’s Monday night comedy host Emma Wilkie, Montreal fave Eman (who launches a new podcast series of conversations about sex, religion and politics at the dinner table on Sept. 15), as well as visiting comics Aisha Alfa from Toronto and New York’s Amanda Xeller.

Performances by 19 comedians and three troupes will be spread across three nights, arranged by style: stand-up (Sept. 4), sketch & variety (Sept. 5) and improv (Sept. 6).

A couple of extra-special workshops are on the agenda also, including a Saturday afternoon confidence-building workshop with the League of Lady Wrestlers called “PUT DOUBT IN A CHOKEHOLD: Confidence Building through Embodiment, Voice, Vulnerability & Improv Tactics.” Organizer Lar Vi explains, “We wanted to have something to bring the community together and get people to interact with each other more. We thought a confidence-building workshop would be something really cool, a skill-building thing that we could do.

“The League of Lady Wrestlers bring this really exciting, huge energy. They do athletic wrestling moves, but it’s also this forum for super expressive, confident, feminist performance art which is awesome — and they make it fun and silly and weird and badass, and really really great. They have a great attitude.”

Ultimately, the comedians, lady wrestlers and narwhals of Ladyfest share one common porpoise (uhhh…. purpose), and that’s to make you laugh your butt off while developing further the already famed Montreal comedy scene.

“We’re a world-class comedy city,” Hall emphasizes, “and the more opportunities that you can create for women to perform in Montreal, the better.” ■
Ladyfest runs from Sept. 4–6 at Théâtre Sainte Catherine (264 Ste-Catherine E.), with shows nightly at 8 p.m., $12 per show/$22 for a weekend pass, available here. The League of Lady Wrestlers confidence-building workshop takes place on Saturday, Sept. 6 from 12–3 p.m.. RSVP required, space is limited. PWYC, $15 suggested donation.