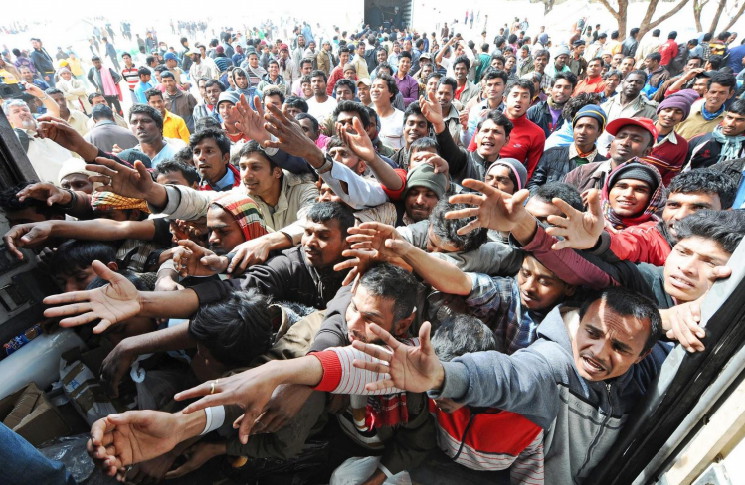 “A lie can be halfway around the world before the truth gets its boots on,” said Winston Churchill. No, wait, it was Mark Twain.

Actually, since similar quotes were published long before either was born, let’s just go with Anonymous.

Truth, in the Internet age, often hasn’t even gotten out of bed before lies have had a chance to travel the world several million times. And like the false attributions of the above quote, lies often outlast the truth.

A friend of mine recently sent me a message, upset about an anti-refugee post that was making the rounds among some of her Facebook friends. The post says refugees are getting close to $30,000 a year from the federal government and compared that to $12,000 for a Canadian collecting an old-age pension.

Indeed. As anyone who bothered to check it would have learned, it is complete nonsense that has been circulating since 2004. Despite factual rebuttals from the federal government, the Canadian Council for Refugees and the Toronto Star — where the false information first appeared in a letter to the editor that hadn’t been fact-checked — the claim is making the rounds once more now that refugees are back in the headlines.

In fact, there are so many lies about refugees spreading these days that Vice felt the need to publish a story calling out some of the biggest. In “Calling Bullshit On the Anti-Refugee Memes Flooding the Internet,” the Vice reporter exposed photos that falsely suggested current refugees were actually terrorists (Tory candidate and former cabinet minister Peter Kent fell for one of those). Vice even documented an attempt by anti-immigrant groups in the United Kingdom to coerce local hotels to refuse immigrants by writing false TripAdvisor reviews.

“Do not touch this place with a bargepole,” wrote one fake reviewer. “I’m not being racist, but it was full of migrants, arguing in the hallways, lots of them outside smoking. I found it very intimidating … I would not stay there again,” wrote “Natalie S.” She wrote a similar review the same day about a hotel 300 kilometres away.

Another false story being trumpeted by anti-refugee groups — helped by a very sloppy media — is the contention that many of Syria’s wealthiest Arab neighbours aren’t taking in any migrants at all. One meme shows photos of a vast, empty camp of air-conditioned tents in Saudi Arabia that are used for the annual hajj pilgrimage, contrasting that with the claim the Saudis have accepted zero refugees.

The Saudis, however, say they have taken in 2.5 million Syrians since the conflict began, and issued 100,000 residency permits. The difference in numbers is explained by the fact that the Saudis, like most Arab countries, have never signed into UN refugee conventions, which is why the official “refugee” count is nearly zero. Syrian exiles granted residency don’t have the same rights as citizens, but with the right to work, schools and free medical care, many are arguably much better treated in Saudi Arabia than in most of the European countries dealing with just a tiny fraction of the exodus.

But that didn’t stop Canadian Defence Minister Jason Kenney, who definitely knows better, from repeating the lie on CTV’s Question Period last Sunday. Rather than correcting host Robert Fife’s statement that “Saudi Arabia and the rich Arab Gulf countries aren’t taking in a single refugee, leaving it to the West to absorb these desperate people,” Kenney called it a “very legitimate point” and said that apart from Lebanon, Jordan and Turkey, neighbouring countries are doing “little or nothing.”

This fits in well with a government that is desperate to justify its own desire to do little or nothing for refugees and that doesn’t hesitate to repeatedly tell bald-faced lies about its own policies. For example, PM Stephen Harper and Immigration Minister Chris Alexander keep telling people that Canada is a world leader in accepting refugees, resettling “one-in-10 worldwide.”

When they use the word “resettle,” it is with a deliberate intention to mislead Canadians, because they are referring to one specific United Nations program that takes immigrants from an asylum country and resettles them in a third country. That program affects less than one per cent of refugees worldwide. It’s a little like claiming you’re a world leader in sports without mentioning the fine print, “* sports involving the tossing of stones on ice while chasing them with brooms.”

Harper and his choirboys also claim Canada is one of the most generous recipients of refugees in the world, on a per capita basis. The truth is, we’re ranked 41st, tied with Costa Rica and marginally better than Liechtenstein, according to the UN.

Probably the worst lie I have seen lately, however, is “An investigation by AGnews has discovered that the photo of a drowned three-year-old Syrian boy whose body was discovered washed up on a beach off Turkey was moved for a better photo opportunity.”

When readers pointed out that soles of the shoes of the boy in the picture were a different colour than the shoes in the now iconic photo of Alan Kurdi, AGnews kept the story and headline up, merely adding at the end:

“Update: A close-up of the soles of both shoes has found they are different boys. Although we were wrong on this occasion and quick to the conclusion it is always good to remain vigilant and open minded.”

A more achievable goal might be to simply fight our naivete when it comes to self-serving statements by our governments or gossip repeated as gospel by national media figures like Fife. Some outlets, like the CBC, have been doing an excellent job of fact-checking throughout this election campaign (no wonder Harper hates them), but that hasn’t stopped other reporters and news outlets from repeating discredited statements.

It’s hard to stop the avalanche of disinformation, but the least we can do is treat it with a health dose of skepticism — and even a tiny bit of research — before we post in our Facebook feeds or Tweet it to the universe.

After all, as Plato wrote, “Those who tell the stories rule society. Those who post them on their wall without bothering to ask if they are true, are nincompoops, LOL.” ■