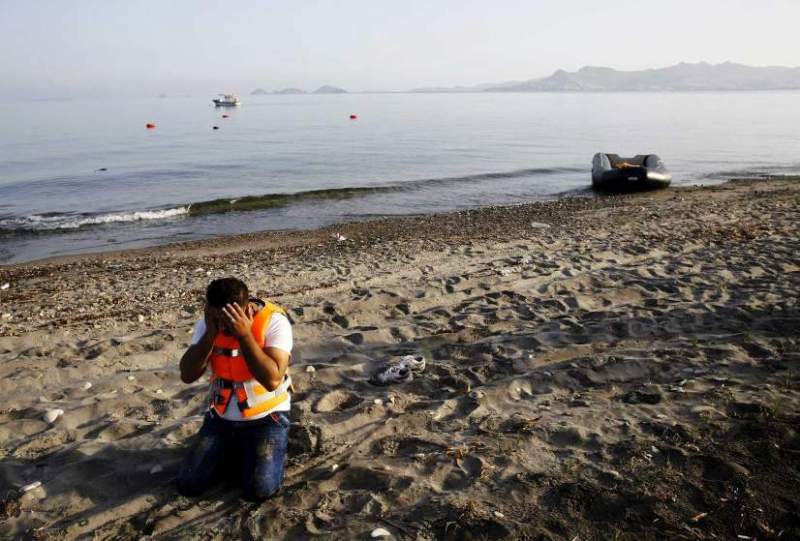 Canadian Prime Minister Stephen Harper, speaking last week about the death of three-year-old Alan Kurdi, said he and his wife felt the pain of any parents when they looked at the photo of the body of that poor child lying on a Turkish beach.

“The first thing that crossed our mind was remembering our own son Ben at that age, running around like that.”

It was a feeling that any parent could understand, imagining what it would be like to see their own child lying lifeless, never again able to play, to laugh or to ask the kind of questions that remind us of the lost wonder of our own youth.

But Harper’s ability to empathize with the father of Alan Kurdi — who lost another son, Galib, and his wife Rehan that same day in that same sea — seems to begin and end with the death of a toddler. Our prime minister was unable to empathize with the pressures that drove a desperate family to flee their homeland, ravaged by a civil war that has killed 320,000 and wounded 1.5 million, according to the Syrian Observatory for Human Rights.

He could picture his own sadness if he had hypothetically lost a three-year-old child, but Harper could not imagine the choices he would have to make, as Abdullah Kurdi did, if 12 million of his fellow citizens were driven from their homes by both radical extremists and bombing by their own government.

(In fact, Harper doesn’t even acknowledge the role the Assad government has had in civilian deaths, preferring to focus blame on the Islamic State, which Canada is helping to bomb. According to the Syrian Network for Human Rights, however, the Assad government is responsible for three-quarters of the more than 10,000 civilian deaths in the first half of 2015 (vs. 1,100 for IS), a toll that includes 3,200 Alans, Galibs and Rehans.)

Harper — like many western leaders dragging their feet in response to the greatest refugee crisis since Germany and Japan tried to conquer the world and eliminate the Jews — is suffering from a disorder that I call empty empathy. It is marked by an inability to put yourself in another person’s shoes except in a strictly literal sense, where you try on their shoes and say, “Ouch, they aren’t very comfortable. They should get new shoes.”

So I’m going to try to help Harper and his followers with a scenario that might make the stakes a little clearer.

Imagine, Stephen, that a civil war forces half of the Canadian population to flee homes that are being bombed and cities that are being fought over by both the government in Ottawa — which kills indiscriminately in a desperate bid to preserve its power — and disparate rebel forces that will kill, maim, rape or enslave you and your family for no other reason than your religion. Even if you’re from the “right” religion, they will kill or enslave you for heresy if you don’t subscribe to their particular fundamentalist brand.

(Remember, Stephen, that you’re not the PM here, just an ordinary Joe.)

Faced with that grim reality, and the fact that both food and jobs are in extremely short supply, you decide to pack up your young family and join four million other Canadians — the equivalent of the entire population of British Columbia — who have left the country. You can only bring what you can carry and your ability to liquidate your assets is hampered both by a broken economic system and a market where your house or car, if you own one, fetches only a tiny fraction of its worth.

You manage to make it to the United States, which is so overwhelmed by Canadians fleeing the war that they have rounded up as many as they can and placed them in massive camps. Yours is on the Montana prairie. There are no schools, very little food and living conditions are disgusting. You are told to stay here until it’s safe to go home or, if you’re lucky, your refugee claim can be processed.

“What’s that? You don’t have a passport? Didn’t you pick them up for the annual family getaway to Bermuda? Oh, and you don’t want to go back to Canada to apply for them? Well, then, how do we know that you’re a legitimate refugee? Maybe you just enjoy camping sauvage with thousands of other destitute Canadians. Or maybe you’re trying to sneak into the U.S. to subvert its values with your gun control and your socialized medicine. I’m afraid your family will have to stay in this camp unless you can find some other country that will take you in.”

Many months later, you manage to get on the phone: “Hello, Indonesia? Yes, I’m a Canadian refugee and I’d like to resettle my family in  your lovely country. Where am I now? The United States. Well, yes, we’re safe here, though everyone is looking pretty thin, the kids can’t remember what the world looks like and I’m having trouble getting used to having 80,000 neighbours, none of whom have anything to do. Oh, you’re only accepting 2,000 Canadian applications this year? And they are mostly going to people who already have family in Indonesia and who have been sponsored by local mosques? But I’m Protestant. What do you mean, Protestants aren’t considered to be at risk? Oh, you want to prioritize religious minorities, you say. You do realize that most of the people killed in this war are from the largest religious groups, don’t you? No, wait. I’m sorry, please don’t hang up. …”

Finally, Stephen, you and Laureen realize that the best chance of providing hope of a meaningful life for your children means leaving the camp. You use your life savings to pay smugglers to make the risky trip across the ocean to a country that hopefully won’t lock you up or pen you in with tens of thousands of other refugees. After weeks packed onto a small boat surrounded by sick and dying Canadians, the vessel starts to sink within sight of the coastline. Laureen grabs your five-year-old daughter Rachel while you try to save young Ben. But the waves are too rough and you have no lifejackets. You lose your grip on Ben and, after calling out fruitlessly for your family, eventually swim to shore. Making your way to the morgue, you learn your family is dead, but photos of your son’s body have catapulted the family into the consciousness of the entire world.

The Indonesian prime minister is among the first to offer his condolences. He says the picture of Ben’s body reminds him of his own son, who was young once, too, but says the best way to help you isn’t to let in more Canadians, but to continue bombing Canada.

In disgust, you return home to bury your family. You bury your hope for the future along with them.

The Syrian civil war has been ongoing for four years and no one in their right mind thinks the bloodshed will end anytime soon, regardless of how many bombs Canada drops from its tiny but expensive contribution of six CF-18 Hornets. If Afghanistan and Iraq are any indication, the civil war could drag on for decades as refugees continue to flow into nearby countries and millions seek to build a life outside the semi-permanent camps set up by neighbouring states.

People are dying by the thousands as Harper hides behind his mask of empty empathy, raising the bogeyman of an ISIS fifth-column in order to keep the flow of Syrian refugees applicants to a trickle.

Canada can do much more and can act much more quickly than Harper is willing to admit. Those of us with real emotions and real empathy need to get on our soapboxes and demand that our country and its allies open the gates and let our neighbours in. ■

Peter Wheeland is a Montreal journalist. His sardonic observations about the city and province appear on Cult MTL every week. You can contact him by email or follow him on Twitter.