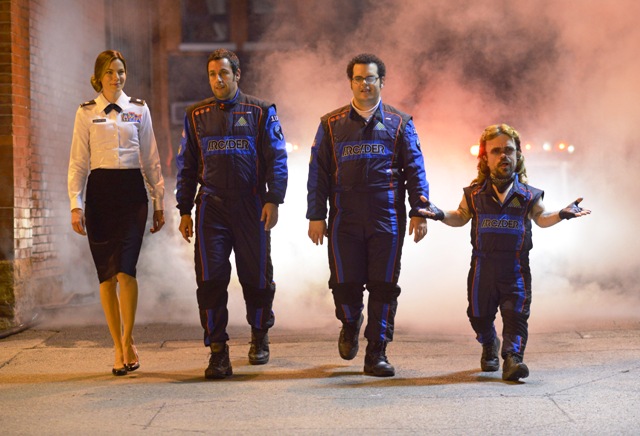 It’s gotten real hard to be an Adam Sandler apologist. You could argue that he’s always been shit and I wouldn’t really have a counterargument, but I grew up with Sandler as one of the major comedy stars and I gave him a free pass for years. Until basically the first Grown Ups, I actually wanted to see Adam Sandler — even if they were shit.

All of that goodwill has basically evaporated in the last few years as Sandler has committed to a never-ending onslaught of shit that has somehow even dragged down well-regarded auteurs like Jason Reitman and Tom McCarthy to making the worst movies of their career. Sandler’s nearing the point of no return, so something like Pixels makes sense. It’s family-friendly and familiar enough to draw in all four quadrants: it’s SFX-heavy enough to pass as a bonafide action blockbuster even though it is, for all intents and purposes, still a Happy Madison production. Pixels is the safe move for a guy in Sandler’s position — which also makes it predictably uninspired.

Sam Brenner (Sandler) was once in the running to be the world video game champion, but he lost to mulleted Cajun braggart Eddie ‘The Fireblaster’ Plant (played as an adult by Peter Dinklage) and forced to work as an audiovisual repairman instead of the international superstar he might’ve become thanks to his Donkey Kong skills. Footage of the video game championships is sent into space as part of a space capsule, which proves troublesome 30-odd years down the line when a race of aliens mistakes the footage for a declaration of war. They take on the form of the classic video game characters they see and start systematically challenging earthlings to a war that follows the rules of the videogame, prompting POTUS Will ‘Chewie’ Hooper (Kevin James) to call upon his old friends Sam, Eddie and Ludlow (Josh Gad) to use their amazing video game skills to save the world. 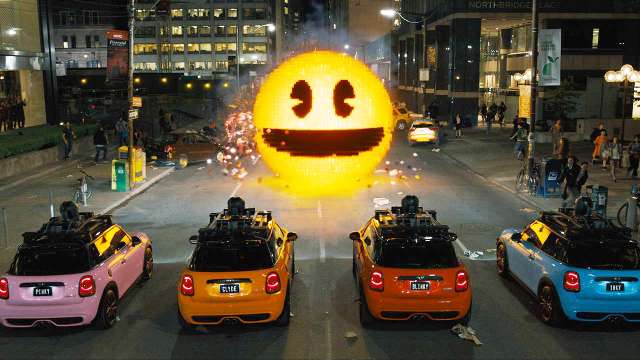 Let’s start with the positive (it won’t take very long): this is perhaps the only Happy Madison production that does not look like an indifferently-lit bag of ass made up 80 per cent of three-quarter shots of Sandler making fun of minorities. While director Chris Columbus and director of photography Amir Mokri (responsible for the last two Transformers movies, Man of Steel and… The Joy Luck Club) are hardly crafting a visual masterpiece here, it’s downright bizarre to see this kind of effort put into this kind of film. Also worth noting: the 8-bit special effects are actually pretty cool. It’s not something I find myself commenting on much these days since every movie is enveloped in a warm blanket of shiny CGI, but the blocky, colourful CGI creations are actually kind of interesting to look at in a sugar-rushy kind of way.

Beyond that, Pixels is pretty fucking dire. You’re treated to a cursory will-they-won’t-they between Sandler’s character and a lieutenant colonel played by Michelle Monaghan (she hates Sandler because he tried to kiss her when he showed up at her house to install a TV), the only real female character in a film that also counts amongst its cast Jane Krakowski as the First Lady (she has one or two lines and spends the rest of the film just sitting next to Kevin James) and Spring Breakers’ Ashley Benson as a video game fantasy pin-up given life (but not lines). The family-friendly, action-oriented plot means that the film is less devoted to Sandler making fun of women, minorities, the mentally ill, the poor, the homeless, the overweight etc. than usual, but those jokes aren’t substituted for anything worthwhile.

There’s a ton of pathetic pandering within Pixels, to boot; this is a film based on 30-year-old videogames, of course, which points toward the target market being not the world’s current crop of eight-year-olds but their wistfully nostalgic dads. (The suburban cargo-short-wearing dad sitting next to me emitted a pang of audible glee when Max Headroom showed up in a cameo, not to mention the scene where Gad humps the floor while singing “Everybody Wants to Rule the World.”) Most of Sandler’s films come off as glorified vacations / paid hangouts for Sandler and his friends. This one at least has the graciousness to let the audience in on the self-congratulatory jerk-off a little bit.

It goes without saying that Pixels isn’t particularly funny. Dinklage’s extremely hammy performance got a couple of chuckles out of me, and our doofy protagonists eventually adopt Q-Bert (?!), whose corny moments as the requisite ambulatory reaction shot are kind of satisfying despite my better judgement. Pixels is not as offensively terrible (or terribly offensive) as a lot of Sandler’s recent output, and that’s about the best that I can say about it. Don’t go mistaking that for Sandler being on an upswing, though. It just means it isn’t the bottom. ■