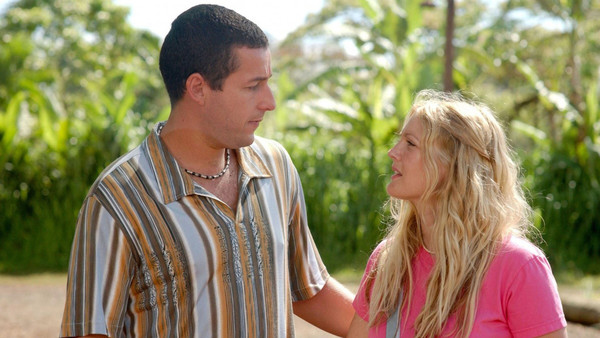 In order to make sense of the latest Adam Sandler disaster, Cult MTL sent two critics to view the film. They came back with severe personality crises.

Lauren (Roxane Hudon): I’m Lauren, played by Drew Barrymore who hasn’t aged in 20 years and somehow thought a third film with professional doofus Adam Sandler would be a good idea. I own a company organizing people’s closets, which isn’t really a real job, but it aptly highlights my main characteristics of being really uptight and anal. My marriage fell apart, because my husband Mark (Joel McHale) was presumably a huge dickhead, but I still made two of the world’s worst children with him. The older one (Braxton Beckham) is mean and a chronic masturbator and his brother (Kyle Red Silverstein) is really shit at baseball and jumps around all the time. But don’t worry, there’s this hilarious running gag where I bang him on the head while carrying him to bed. Take that ya little twat! My only redeeming quality seems to be my best pal Jen (Wendi McLendon-Covey), who just shows up wherever I am to dish out funny lines and drive away, like the perfect sidekick with no real story arc of her own.

Jim (Alex Rose): I’m Jim. I’m your typical sadsack sporting goods salesman (I work with Shaq, by the way) whose perfect wife died, leaving me with three little girls that I am woefully unprepared to parent, even though as a sadsack Sandler character I actually somewhat resemble a normal human being. My terrible parenting skills result in all my children having weird pageboy haircuts and dressing like fat middle-aged dudes from the Midwest (i.e. me). I’m not ready to date after my wife’s death, but I do it anyway.

Lauren: I go on this terrible blind date with this big-eared fatso named Jim (Sandler) who brings me to Hooters, where I spew onion soup all over myself sometime before or after he tells me his wife died of cancer. Even though I never want to see him again, I keep bumping into him, which is just what happens when two douchebags who drive the same type of minivan and take their coffee the same way are meant to be together. We even end up on the same luxury trip to Africa. I could explain to you why, but it would be as boring and implausible as the first 45 minutes of the film.

Jim: In order to be a better parent to my girls, I end up in Africa with this crazy woman that can’t deal with buffalo shrimp from Hooters. We have lots of fun there othering the handful of black people that work on the resort and parenting each others’ children because isn’t it funny that, as a manly man, I have to parent girls? I guess it’s pretty cool that none of us get shit on by a wild animal, although we did see some rhinos humping and I got real scared of some plastic crocodiles.

Lauren: Black people sing and dance around us, rhinos hump in the distance, unfunny jokes repeat themselves and Jim and I really bond, especially after I tart up his ugly daughter, he shoves my annoying son on an ostrich and we massage each other’s ears. Sometimes, you just need a ridiculous caricature of a funny little African man to remind you that terrible white people belong together. Godspeed, go fuck yourselves.

Jim: I think that, in conclusion, if I was to draw anything from my experiences seducing Lauren in Africa, it would be this: it turns out that I can make an interminable 117 minute movie without making fun of handicapped people or the less fortunate — so that’s good. My dumb friends barely tagged along for this movie, which is also great. My buddy Steve Buscemi couldn’t tag along either, so I found out that he has a terrifyingly similar-looking brother named Michael — Lauren told him off at a baseball game. But while my trip to Africa was slightly more bearable (sometimes even sort of begrudgingly funny) than the time that one guy was visited by his ugly sister Jill or the one time that me and all my friends walked around aimlessly until a deer ate Taylor Lautner’s dick, it was just as unnecessary. ■