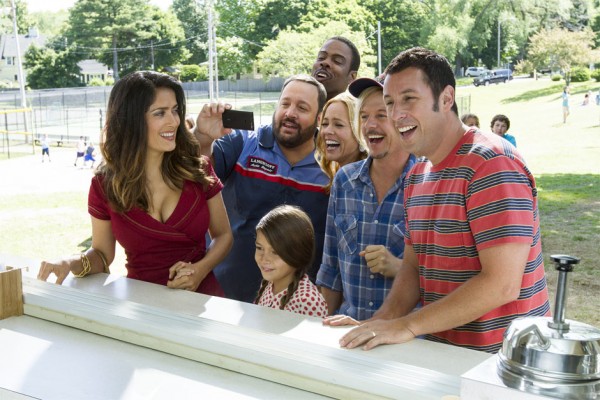 Thanks for clicking the link that leads you to the review of Grown Ups 2 on Cult MTL. My intuition tells me that you followed said link to read my opinion of the performances, jokes, plotlines, social commentary and visual effects that compose Grown Ups 2, a motion picture co-written by Adam Sandler and designed as a follow-up to the hit film Grown Ups, starring a bunch of people that were on Saturday Night Live (and Kevin James). I’m sorry to report that I haven’t seen Grown Ups and therefore can’t wax poetic on how the sequel stacks  up.

I can tell you this, though: you don’t need to have seen the first Grown Ups – or really any movie at all – to understand what Grown Ups 2 is all about.

The film challenges the very idea of a motion picture as a coherent whole, choosing instead to throw innumerable fart gags, one-joke cameos from a dizzying array of SNL alums and celebs and endless half-baked plot strands together for an expensive, incoherent and abrasive A-list celebrity party. If that sounds tantalizing to you dear reader, please throw together any pictures, Vine videos and tweets that may have surfaced from your last house party and it’ll be my pleasure to assess their artistic qualities.

Four old friends (Adam Sandler, James, Chris Rock and David Spade) spend the first day of summer fucking around in the local K-Mart, beating up a stoned and despondent bus driver (Nick Swardson) and (for the most part) ignoring their families. Sandler’s buddies coax him into throwing an ’80s –themed shindig at his house that night, but caricatural fratboys from the local college (led by Taylor Lautner), Sandler’s childhood bully (Stone Cold Steve Austin), his wife’s (Salma Hayek) desire to have another baby and a rabid deer that pisses on everyone all threaten to muck up the works. (Everyone else gets a little character arc to work through as well, but the less said about Spade’s complicated relationship with a female bodybuilder, the better.)

I could explain how the film systematically makes a punching bag out of everyone that isn’t a straight, white, middle-aged male of average build with middle class values. I could hash out all of the problems contained in the dubious scene in which Jon Lovitz (as a lecherous janitor) forces the film’s clueless female leads (Hayek, Maria Bello and Maya Rudolph) to shake their breasts and tap their asses as “aerobics.” I could certainly go into how James’s ability to burp, sneeze and fart simultaneously is so tremendously beloved as a running gag that it actually closes the film —  not to mention the tedious gay panic scene (showcased extensively in the trailers, for the morbidly curious) in which the Lonely Island (with Will Forte and Taran Killam, for good measure) rub their soapy cheerleader bodies all over James’s car. All I need to say, really, is that for as little effort as Sandler has been putting in his recent output, Grown Ups 2 is the laziest, the ugliest and the most blatant cash-in of them all.

I get it, though. Who wouldn’t want to spend tens of millions of dollars essentially filming an ’80s party scene (not to mention eating pretzels, farting, going skinny-dipping and dancing around with Shaquille O’Neal) with your best friends and co-workers of the last 20 years while also getting paid handsomely? Most people of any gender, colour or creed would think that the idea of getting half a million dollars to pretend to be horrified while a deer eats Taylor Lautner’s dick to the sweet sounds of the J. Geils Band is a cushy gig.  We’d all make Grown Ups 2 if we could, but only an asshole would charge people 12 bucks to watch it. ■