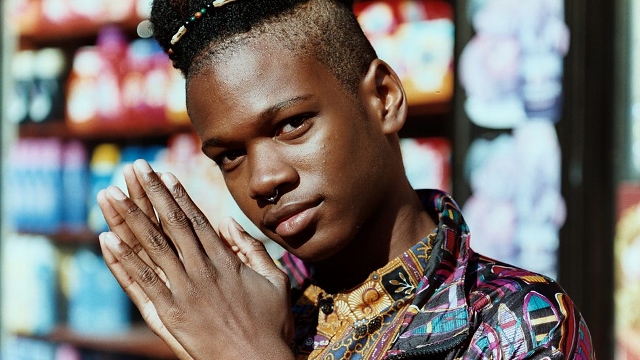 Pop music buzz kid Shamir describes his fast rise to renown as “kind of an accident.”

“I never even left the band I was in,” he says. He’s referring to Anorexia, a high school punk duo he started up with his friend Christina. They released a cassette right after graduation in the summer of 2013, but their next move (probably) put an end to the band.

“We had a lot of time so we were like let’s do fun side projects for the summer and come back together when we’re ready to write new material, and my summer project ended up being this.”

This is Shamir, a 20-year-old musician born Shamir Bailey in Las Vegas, to a family loosely tied to the Nation of Islam. His electro-funk beats back a steady flow of sassy lyrics, delivered in an endearing gender-neutral countertenor — he’s been described as both “post-genre” and “post-gender,” but you can see and hear him in the video below to decide for yourself.

Shamir’s debut EP Northtown came out on Godmode Music a year ago, and it was that label’s main man Nick Sylvester who helped Shamir take his summer lark to the next level.

“I wrote a few pop songs in my room with my drum machine and recorded it very ratchetly,” he explains. “I was expecting maybe 50 to 100 tapes to be done and that would be that, and he said, ‘No, come to New York, I really wanna record with you.’ I was like ‘Free trip to New York, whatevs,’ then I came back home and literally a few weeks after we recorded our first song, it was on Pitchfork. I was like, ‘What just happened?'”

Shamir tells me he could’ve easily ended up a rapper, if his Anorexia bandmate hadn’t claimed the genre for her summer project first. “We both love to rap,” he says. “Before rehearsal we’d rap over a beat just to loosen up or whatever. When she started on the rap thing, I was like, ‘Okay, I guess I’ll do pop music.’ I was really into CocknBullkid — I got a CocknBullkid tattoo — and I love the first Charli XCX album, I’ve always been obsessed with Robin, so I thought it would be cool to try my hand at pop.”

After the EP release last summer, Shamir started playing live with an eight-piece band (including a full horn section), but now he’s got a tighter three-piece to do his tunes justice, enlisted just in time for a SXSW festival appearances in March and the XL Recordings release of Shamir’s debut LP Ratchet on May 19.

With his live band based in L.A. and a pretty full touring schedule, Shamir has become a bicoastal couch-surfer.

“I’m just everywhere at this point,” he says (calling from London, England, incidentally). “I just got off tour, and my lease in Vegas went up so I bounce back and forth between L.A., Vegas and New York, where I pretty much do all my recording. So I’m kind of homeless right now, actually.” ■