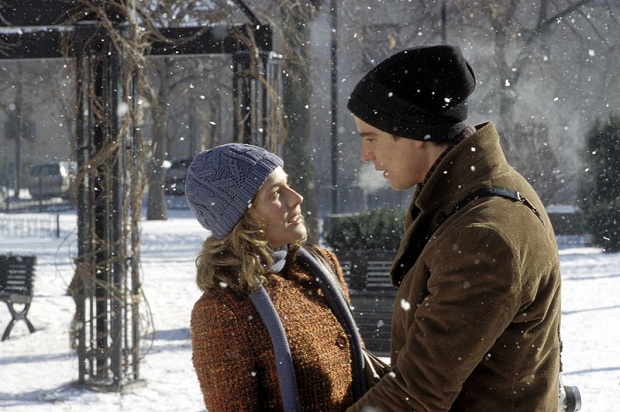 Does Montreal play itself? It certainly does not. It takes a fair-to-middling job of standing in for Chicago (more on that later).

Most egregious local landmarks: Well, the Wicker Park of the title is played by Little Italy’s Dante Park. While the real Wicker Park isn’t particularly large, it’s gargantuan compared to the tiny Dante Park. I suppose this would only matter to Chicagoans who probably aren’t reading this right now. Other notable locations include a stretch of Sherbrooke at Hampton and a scene shot inside of NDG pub Honey Martin.

Notable local talent: Josh Hartnett’s disposable fiancée (her performance bookends the film) is played by Jessica Paré, a few years after her breakthrough in Denys Arcand’s Stardom but quite a few years away from Mad Men. The rest of the supporting cast is all local, including Marcel Jeannin as an over-the-top theatre director and Mark Camacho as a hotel barman.

Montreal and Chicago have a lot in common as metropolises: they’re both on water, they both accept (if not promote) a robust drinking culture, people often argue about which one is the coldest (whoever wins, we lose) and they both take insane pride in their proprietary junk foods. Wicker Park is a film in which Montreal often doubles for Chicago, though not in a way where the two feel interchangeable; Wicker Park feels not so much as if it’s meant to celebrate Chicago as much as skim past it. “It’s like the city is its own character!” is a hackneyed cliché in this case, but anyone who’d say this about Wicker Park is running a game of deception that has nothing to envy this film’s never-ending series of contrivances.

Matthew (Josh Hartnett) works for an advertising firm that believes in him enough to send him to China. He’s engaged to his boss’s sister (Paré) and well on his way to become the slick, soulless type. During a business dinner at a fancy restaurant, he thinks he spies Lisa (Diane Kruger), an ex who left him two years ago without any explanation and for whom he clearly still holds a torch. He attempts to find her (read: he succeeds at stalking her) only to find that her apartment is inhabited by a different woman claiming to be named Lisa (Rose Byrne). Matthew begins a tentative relationship with the new Lisa, who isn’t exactly who she claimed to be.

Wicker Park is a remake of a much-buzzed about (at the time) French film called L’appartement, a twisty thriller that’s exactly the kind of foreign film that launches bidding wars. The concept of a remake of L’appartement was a hot property for a while, but it took eight years for it to become a reality, and it went from potential Spielberg project to irrevocably dated Josh Hartnett vehicle in the process. It’s increasingly hard to comprehend why Hartnett was ever considered Hollywood’s new It boy. While he’s no more or less of a terrible actor than any heartthrob that was foisted upon us since, he’s weirdly uncharismatic, emotionally constipated and difficult to relate to. (Even in the very forgiving world of Hollywood films, it’s hard to empathize with a guy whose biggest problem is that he’ll eventually have to choose between Diane Kruger, Rose Byrne and Jessica Paré.)

There’s quite a bit of turd-polishing to McGuigan’s style, too — he uses copious and unnecessary split screen sequences to spiff up the action, but his use of space and continuity is disorienting at best and nausea-inducing at worst. While most split screen sequences are typically used to show two alternate points of view on the same scene or two parallel scenes, McGuigan will sometimes show the same scene three times or show the foreground in one half of the screen and the background in the other, with a different scene crossfading into the background. It’s never very dynamic and mostly very confusing.

Wicker Park’s general form comes off as Hitchcockian, but its central premise relies not on the complexity of the plot but the fragmented, layered way in which it gets revealed. It’s actually kind of insultingly simple, but director Paul McGuigan employs convoluted flashback structures to peel away at the onion layers of the story. It’s a bunch of smoke and mirrors, sure, but it’s really the only reason why the film is as watchable as it is. Deliberately confusing the viewer in order to better hold their hand until they listen to your explanation is cheap, but I can’t deny that it’s effective. Wicker Park isn’t very good, but it’s very dedicated to keeping you engaged and confused as to exactly why it isn’t so good. ■