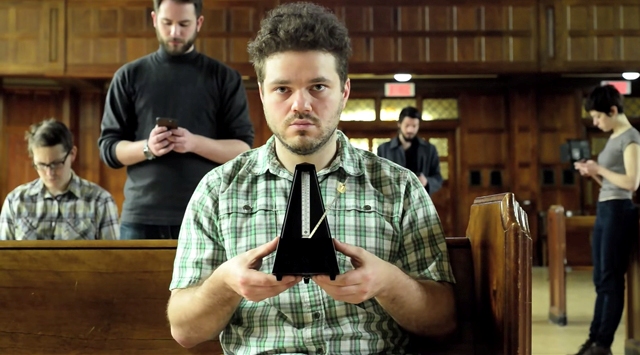 “Flesh is decay. Self is transcendent.” The statement is repeated over and over in the trailer for Studio Porte Bleue’s latest production, #ThanksBeToRay, which is running until May 31 at the unconventional theatre company’s studio in the southwest. A congregation participates in the call-and-response ritual recalling a Catholic mass, but these adherents belong to the church of Ray Kurzweil (Google’s director of engineering), and technology is their god.

For Studio Porte Bleue’s artistic director and playwright Colin Lalonde, theatre is a perfect avenue to explore and have conversations about the big questions of the human condition, and the plays produced by his company tend to be centred on the way we organize ourselves in modern life and the effect on our psyches, such as the cult of technology in #ThanksBeToRay, the effects of war and PTSD in While Rats Eat Pie and our working lives in Citizen vs. Work: Generation 2 Generation.

“There always have to be big ideas,” Lalonde tells me over the phone. “I always want projects to have interesting forms. With While Rats Eat Pie, it was a dinner party where the performer would cook for you and eat with you, and we’d all be sitting at a table. This time, you’re in a church service. Those forms interested me on their own—and then, how do you plug in interesting social issues and philosophical issues on top of that? After that, the story comes.”

Despite being less than two years old, Studio Porte Bleue is quickly gaining a reputation for their immersive, thought-provoking works. The company was voted the #2 Best Theatre Company in Cult MTL’s 2015 Best of MTL readers poll, and their play While Rats Eat Pie, was voted the #1 Best Play.

“It was funny to see that top 5,” Lalonde laughs. “It made me chuckle, to be with the big boys. It means so much that Montrealers are enjoying and appreciating our work.”

It could well be that the young company stuck out in voters’ minds due to the lengths Lalonde and his colleagues go to forge meaningful relationships with their audiences and patrons, inviting them to engage in conversations about the works and contribute to the development process of new productions.

“The idea of the company is to have deeper bonds with the people who come to our shows. My favourite part of going to shows was always going to the pub afterwards or talking about it in class the next day with my colleagues. I realized that not everybody gets that opportunity, so we design all of our shows so that afterwards there is a conversation, and it’s not your typical talkback style. It’s much more relaxed and everybody has a voice.”

Anyone curious about the studio’s interactive approach and immersive, experimental formats will be able to check out Studio Porte Bleue’s current production, #ThanksBeToRay, until the end of the month. I asked Lalonde to elaborate on the idea behind the play.

#ThanksBeToRay is about Ray Kurzweil, the director of engineering at Google, and his idea of the technological singularity,” Lalonde explains. “The Singularity is a time when there will be a rupture in human history because technology is moving at such a pace that we’ll transcend our current evolutionary station. I wouldn’t be the first person to call that a religion, but I decided to make a play about that being a religion. We put you in the middle of the cult of technology and you’re at a service of the singularity.”

Like many of Lalonde’s plays, #ThanksBeToRay was born from seeds planted during day-to-day conversations — in this case, one that took place at a party.

“I was at a party and was having a really long, rambling conversation with this guy, Jacob Aspler, about the Singularity and the future, and life. It inspired me to want to do this play so I asked him if he wanted to come on board and act in his first show.” Lalonde recalls, emphasizing the special creative energy of the typical Montreal party.

“It’s very much a Montreal thing,” he tells me. “I think that’s unique to here, too. It was never like this in any of the other cities I lived in. It’s a super artistic city, and there’s a vibe here that’s different. That’s the joy of it really.

“You know how in Portlandia there’s that ‘the ’90s are alive in Portland’ song? I feel the same way about Montreal. The counterculture, fringe, grunge, artisanal, ‘we’re equal parts party and protest’ vibe fills this city with such an intoxicating energy. I’ve lived in plenty of cities but Montreal has always stayed my home and pulled me back in.” ■