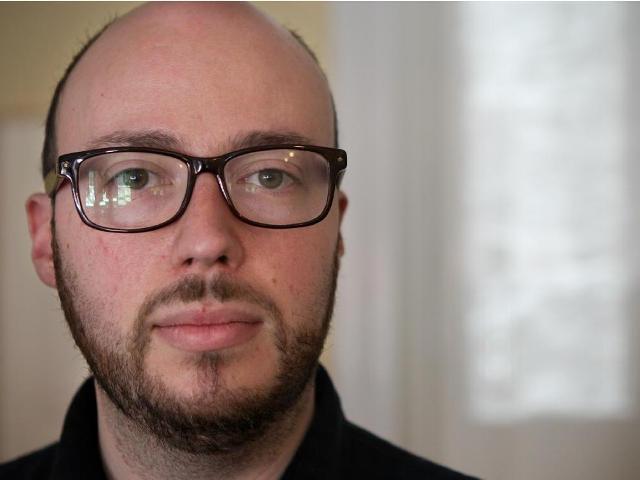 “It was a night that felt sort of delirious, even before my name was announced on stage,” recalls Sean Michaels, reflecting on the Giller Prize ceremony in November of 2014. “Delirious” seems apt: It would be a momentous event for any debut novelist. When Michaels’ novel Us Conductors, a fictional biopic of the theremin’s inventor Lev Sergeyevich Termen, was awarded the purse of a staggering $100k, it came with an inevitable deluge of attention.

Michaels, who was recently voted #3 Best Author in Cult MTL’s Best of MTL readers poll, had once mentioned that Montreal’s Café Olimpico provided a beneficial environment during the composition of his novel, not just because of the quality of its coffee or the lack of wifi, but because it provided ample distractions that aided his process. I wondererd whether all of these post-Giller festival appearances, resulting press and incoming writing assignments were providing a similar, if at all similarly beneficial, distraction. “I’m definitely getting much more interesting emails than I was getting a year and a half ago, whether it’s publishers planning paperback editions or event organizers trying to figure out what flights I should fly on… so there’s a lot of distraction. I really want to start a new novel, but it’s hard to rebuild those habits of working quietly on your own.”

The benefit to his career, however, can’t be denied. “I’ve remained super busy, doing a lot of events,” Michaels says from the backseat of a cab over the phone, having just flown back to Montreal from Toronto for the Amazon First Novel Award ceremony. “(As of this interview,) I just did an event in Montreal last week and I’m doing two events in Toronto next week, and that’s really come through the lucky break (of the award).”

Since the Giller, Michaels’ work in music journalism has expanded far beyond his award-winning music blog Said the Gramophone to, among many other publications, a regular music column for The Globe and Mail. “They’ve really given me carte blanche to write in the way that I want to write about the things I want to write about,” Michaels explains. “I feel like I’m introducing my style of writing about music to the broader Canadian public, some of whom have only heard about me through this writing prize. It’s been a nice way of maybe reminding people about this other part of my work.”

Having only recently gained mainstream recognition as an accomplished novelist, this Montreal author works harder to balance out his music writing and his fiction. “Music criticism for me, because of the success of the novel, feels like this thing I’m notoriously good at, but it’s almost a novelty question,” he says. “When people ask me about music criticism, it’s like asking, ‘Oh, do you still go hunting for lions in Africa? Do you still listen to obscure hip hop groups from Halifax?’ So, I think it seems to be more of an eccentricity of mine, rather than being the fundamental thing I earn my livelihood through. But that’s from the outside in. For me, it’s feels as important to my life as ever and a regular part of my art practice.”

While some may recognize Michaels for his writing on music and now others for his novel, the two realms of subject matter appear to be inextricable from one another in Us Conductors, a work that represents a thoughtfully executed synthesis of his passions. “Music and literature are both these really crucial ways we add layers of meaning and metaphor to the lives we lead,” he notes. “It’s why we clutch art to our chests even in the darkest hours.”

As Michaels’ work in music journalism and criticism expands, so does his work in fiction. He continues to work on short fiction and to meet with his Montreal writing group the Soulgazers, whose rotating roster of members currently also include novelists Anna Levanthal and (Cult MTL contributor) Jeff Miller, and translator-cum-poet Melissa Bull. However, readers who are anticipating his next novel will have to wait before he’ll proffer anything beyond this: “I am trying to write another novel that maybe takes place in Montreal, but… it’s too early to say.”

With an expansive list of positive reviews for Us Conductors coupled with the accolades he’s garnered, one imagines that Michaels must experience pressures of expectation when it comes to his next novel. “You always want to do the best work you can do. I think that winning a prize doesn’t really change that. Either I’m fraud or I’m not. I’m going to be trying to do the best work that I can.” ■