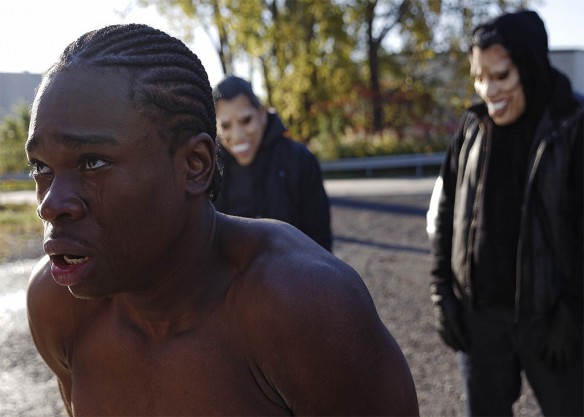 When I worked in a video store, there was one cardinal rule: don’t order a new copy of Scarface, because that new copy of Scarface isn’t going to last a week. Evidently, the criminal machinations of Tony Montana (or the Vatos Locos from Blood In, Blood Out, or Doughboy and his crew from Boyz n the Hood — all movies that did not survive very long on the shelves of the late Video 2000) awoke some kind of primal criminal instinct in customers, and they decided to just keep the copies of the film and never return to the video store. It seems audiences rarely understood or accepted that most crime stories are in fact morality tales that end poorly for the protagonists — or maybe they just choose to ignore it because they made crime look so damn cool. It’s hard to imagine someone feeling the same way about Yves Christian Fournier’s Noir, a grim bit of business set in Montreal North that has a lot in common with the aforementioned crime film classics but also refuses to indulge in the same kind of theatrics.

Dickens (Kémy St-Éloi) lives with his older brother (Clauter Alexandre), a powerful but secretive criminal who prefers to cover his ass and work in the shadows than flash his status. Dickens is eager to join his brother in crime, but his brother believes him to be too sensitive. On the other hand, there’s Kadafi (Salim Kechiouche), a decorated member of the TB crew who has spent some time in jail and is now trying to go straight for the benefit of his young son, but is having trouble finding straight work. Suzie (Jade-Mariuka Robitaille) works as a  stripper for her boyfriend Evans (Christopher Charles), who’s trying (and failing) to get out of the life, the only one he knows, while Fleur (Julie Djiezion), a teenage mother, dreams of raising her daughter outside of the ghetto. 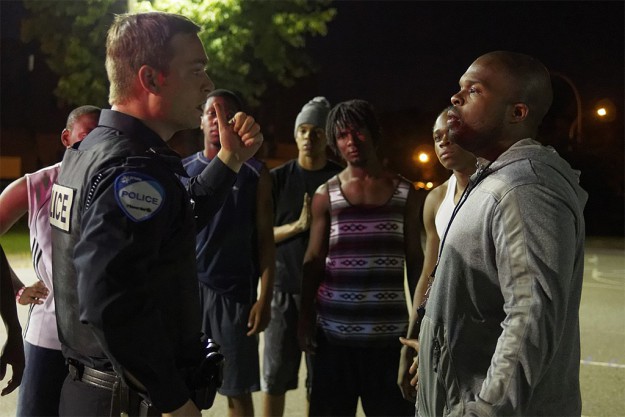 Noir shares a lot of narrative similarities with the ‘hood’ film, a genre which had its heyday in the early ’90s, which means it doesn’t necessarily break a lot of new ground on that front. It’s an unfortunate by-product of making films about a difficult world where the worst often does happen and there aren’t many happy endings to be found — if something seems too good to be true, it is, and whatever would be the worst possible outcome in a situation is often the only possible one.

Where Noir stands apart from the herd is screenwriter Jean-Hervé Désiré’s keen ear for dialogue and facility with characters. This has nothing to do with the whitewashed street gangs of 19-2 (where the most fearsome gang is comprised entirely of preppy white guys from Outremont) or the sometimes cartoonish depictions of other local street gang films. Noir doesn’t have its toxic Tony Montana figure because they have no place in the real world.

Yves Christian Fournier’s first film, Tout est parfait, was a particularly harsh look at teenage suicide that benefitted a lot from from Fournier’s low-key direction. Here, Fournier takes it down another notch, shooting almost entirely with natural light and forgoing the rat-a-tat editing and in-your-face mise-en-scène that often characterizes films set in that kind of milieu. It certainly isn’t immune to bouts of melodrama — the film’s coda, clearly inspired by the Fredy Villanueva story, feels tacked-on to a movie that’s already heavy with misery — but the film’s cast (about half of whom are non-professional actors or virtual unknowns, though Kechiouche was in Blue Is the Warmest Color and the late Lovhard Dorvilliers aka Le Voyou of Muzion fame appears in a supporting role) and Fournier’s even keel help transcend the film’s often-necessary heaviness. ■