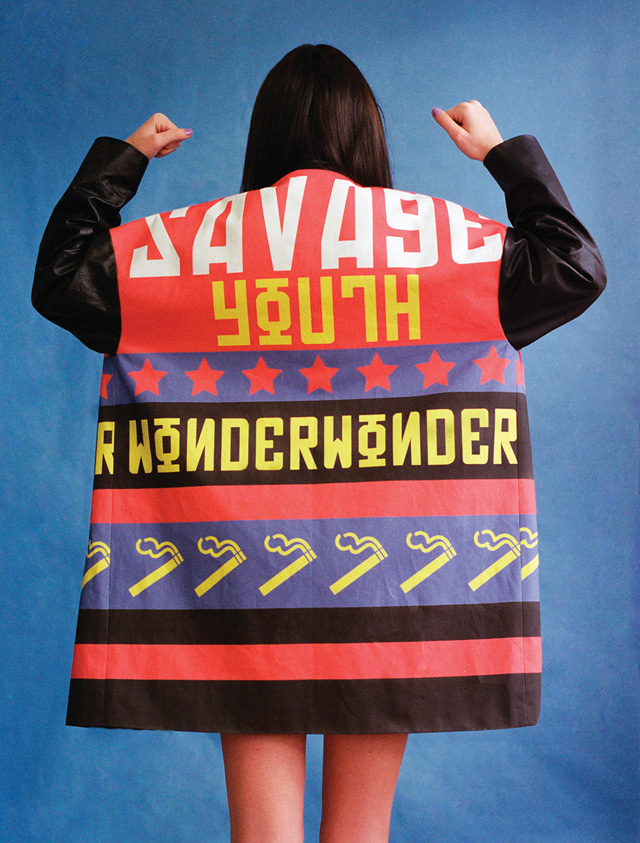 Montrealers can weep all they want over the extinction of Montreal Fashion Week, which ended in 2013. If you ask me, there’s no greater solance than seeing Montreal designers take over the Toronto Fashion Week runway instead. From March 23–27, a slate of local designers and labels like Mélissa Nepton, Mackage and Rudsak will do just that. What’s especially exciting about this occasion, however, is the inclusion of newcomers like Atelier Wonder, who’s shaking up the Canadian fashion scene with something completely different.

I met with Paulina Wonders, the designer behind the Montreal label, at her St-Henri workshop (located in her apartment) seven days pre-runway show. By 10 a.m., the 26-year-old LaSalle College graduate had already put in three hours of work, hand embroidering items.

She’s putting what should be the final touches on her Fall 2015 collection, which she will present during Toronto Fashion Week on March 25. The amount of work she has already put into her latest collection is apparent, as is the work she still has to do.

About half of the items from her 28-piece collection hang neatly on a rack in her workshop, while the other half still remain with her seamstress.

The Fall collection is in tune with her brand style: funky, eclectic, and whatever the opposite of mainstream currently is.

“It was just the next theme that interested me and that I wanted to explore. Once I have the inspiration, I take advantage of it.”

The collection is made up of digital prints, hand embroidered items, and a lot of shiny materials (think PVC) in grey, black and orange that give off that space vibe. Garments include skirts, dresses, trench coats and more.

Though her past collections have embodied a raw, street gang vibe, her Fall collection will feel more imaginary and playful.

The runway presentation will be like a “cyber city” with digital projections. Like her initial vision, the runway will have an industrial feel and an atmosphere straight from a scene out of Blade Runner.

“It’s going to be more like a gang of robotic humans,” Wonders semi-jokes.

Like her past collection, her latest runway looks could be considered unisex. “My line-up is split up between girls and guys,” she says, “But to me gender is kind of relative. I just put guys in skirts and girls in pants. The looks aren’t defined by class or gender. I see [the collection] more as a lifestyle or a group of people.”

Like Wonders’ brand style suggests, her designs are not for the fashion wallflower.

“I definitely make this stuff for people who have an interest in fashion and trends. You have to be eccentric and you have to have balls to wear this stuff that is really a lot more out there than what you find in normal stores.”

Before officially launching her own label in 2014, she designed costumes for Cirque du Soleil. She also did an internship in London where she helped develop a couture collection for Charlie le Mindu, a famed hairdresser known for creating collections out of human hair.

“After doing the internship, which was really intense and pushing myself so far, I realized what my limits were and that it was time to be my own boss,” Wonders says, noting that being a designer has always been the dream, but at times she has doubted it as a career path.

Though a newcomer to Toronto Fashion Week, she has presented in the past at Fashion Art Toronto and participated in the Mercedes-Benz Start-Up competition in Ottawa last October, where she made it to the semi-final round.

This year, her designs will be seen on the big stage in Toronto, and they’re sure to be distinct amid the rest of what Fashion Week has to offer.

“I know I’m going to stand out from the other designers who are going to be presenting. Who knows what’s going to happen? But I like what I’m doing and that’s all that matters.” ■