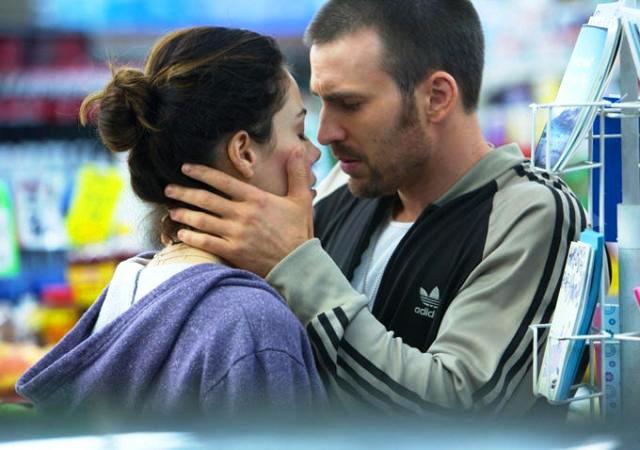 The romantic comedy has become so codified that there are really only two ways to go about it: revel in its clichés and deliver a predictable take on the genre to appeal to a mass audience (see: the brunt of McConaughey’s pre-McConnaissance work), or deconstruct it in a way that explores and critiques said clichés (see: They Came Together, Down With Love). Both could potentially be great, both could potentially be horrible, and both clumsily find themselves fighting for supremacy in Justin Reardon’s Playing It Cool. It sees itself as a playful, slightly meta look at the recurring clichés of the genre but it never quite has the conviction or originality necessary to truly be subversive.

Chris Evans plays an unnamed screenwriter who accepts his agent’s (Anthony Mackie) offer to rewrite a romantic comedy (set to star Ashley Tisdale and Matthew Morrison) in order to get a crack at an action movie he’s coveting. The only problem is that he doesn’t believe in love; his heart has been a calcified chunk of garbage ever since his mother walked out on him as a child. He finds it hard to get cracking on the script, bumming around with his crew of writer pals: the gay best friend (Topher Grace), the frustrated nerd (Martin Starr), the cynical unrequited love interest (Aubrey Plaza) and the married man (Luke Wilson). He meets-cute with Her (Michelle Monaghan), a manic pixie flibbertigibbet in the classic mold, and suddenly finds himself feeling that dirty emotion he’s avoided all his life. She’s perfect for him and they have an instant chemistry that’s nevertheless challenged by the fact that she’s already got a boyfriend, the irredeemably boring Stuffy (Ioan Gruffud).

The set-up is completely familiar in all aspects, borrowing from romantic comedies both classic (When Harry Met Sally) and not so much (Leap Year). It’s obvious that the focus isn’t on the unpredictability of the narrative and more on the film’s knowing deconstruction of it. The characters sit around analyzing Evans’ burgeoning relationship as if it were a romantic comedy, throwing around industry-specific terms like Syd Field on a three-day bender. It’s occasionally charming but mostly clumsy, sometimes erupting into the film’s most original (and thus most bungled) gimmick. Evans claims that he can’t hear people tell stories without imagining himself in it, and the film periodically dips into fantasy sequences of classic storytelling starring Monaghan and Evans. These are generally cute and interesting (more so than the half-dozen scenes of Evans professing his love from the street to Monaghan up in her apartment, Cusack-style) but they’re mostly glossed over by the film.

The script to Playing It Cool (previously titled A Many Splintered Thing, a much better title) made an appearance on the Black List, Hollywood’s annual round-up of best unproduced screenplays. Lots of great movies went on to be made after appearing on the Black List, but also lots of bad high-concept ones like The Beaver, Things We Lost in the Fire and Transcendence. I can see how Playing It Cool would read as breezy and charming on paper, a meta deconstruction that doesn’t get too cute about it. By half-assing its most interesting bits (which include an animated WWII sequence and a parody of a probably non-existent Korean soap set in the 1600s), director Justin Reardon simply winds up playing it safe and only leaving in the cute.

Granted, if you’re going to have a bungled, aseptic attempt at a rom-com deconstruction, you could do a hell of a lot worse in the cast likeability department. Everyone is saddled with playing broadly underlined types but there’s really no one better than Aubrey Plaza to play an Aubrey Plaza-type. The film’s winking deconstruction of screenwriting tropes could potentially have been downright excruciating without such a likeable cast. In its best moments, it has the breezy charm of something like Scott Pilgrim vs. the World (which perhaps not coincidentally also starred Evans and Plaza). It’s too bad that those moments are few and far between. ■

Playing It Cool opens in theatres on Friday, Feb. 27. Watch the trailer here: