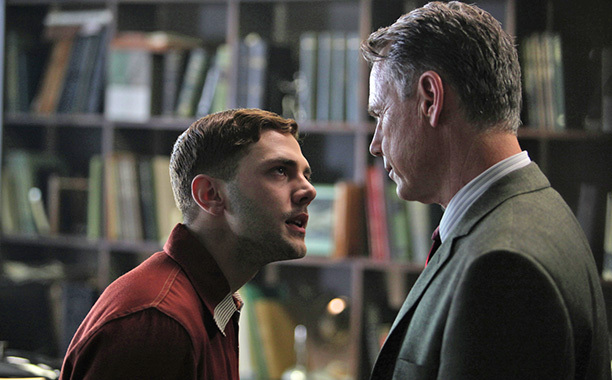 Even though he started his career in front of the camera and has appeared in all but one of his films, it’s hard to see Xavier Dolan as an actor. His personality is such an intrinsic part of his films (not to mention that he flirts with being overexposed in the local media) that one could hardly be blamed for being unable to extricate the qualities of the performance from the overall merits of the film.

Dolan’s straight-up acting work has been fairly subdued since his breakout with J’ai tué ma mère in 2009 — he cameos briefly in Jacob Tierney’s Good Neighbors and has one of the more thankless roles in Podz’s ensemble drama Miraculum (he plays a Jehovah’s Witness whose beliefs prevent him from seeking medical treatment; it involves a lot of coughing). Elephant Song could therefore be considered Dolan’s first real acting vehicle, his first chance to truly spread his wings under someone else’s direction.

Bruce Greenwood plays Dr. Green, the administrator of a psychiatric hospital who’s tasked with interviewing a difficult patient named Michael (Dolan). Michael is the last person to have seen the missing Dr. Lawrence (Colm Feore) before his disappearance, and the hospital believes that he may have something to do with it. Michael is immature and petulant, prone to toying with Green for his own pleasure and dangling bits of information in front of him only to whisk them away at the last second. Unfamiliar with the kind of mind games Michael plays, Green nevertheless lets himself get caught up in Michael’s tangled web of lies, half-truths and put-ons.

Charles Binamé adapts Nicolas Billon’s play in a way that attempts to open up what’s essentially a two-hander on stage. There’s a nurse played by Catherine Keener who periodically breaks up the action and serves as Green’s sounding board, a subplot involving Carrie-Anne Moss as Green’s wife and the whole thing is framed through a police interrogation led by local actor Guy Nadon. That’s a lot of bells and whistles for a film that’s never better than when the two lead actors are left to square off for extended periods of time.

It’s never an easy task adapting a play to the screen. Lots of classic plays have had less-than-stellar movies made about them, but Elephant Song might have benefitted from a little more claustrophobia and a little less world-building. Part of its appeal is how essentially simple its central conundrum is: Green just needs to know if Michael knows anything (in an interesting twist, Michael isn’t actually being accused of anything), and Michael has no interest in telling him even though he quite enjoys the attention. That so much of the movie is spent explaining around that feels superfluous and jammed together.

That being said, when the sparks fly in Elephant Song, it’s a tremendously satisfying bit of business. Greenwood and Dolan are cast for their strengths: Greenwood for his stuffy, button-down conservatism and Dolan for his propensity to yell and be snotty (well, there’s a little more to it than that, but you get the idea). When the film lets them square off, it’s electric; Binamé steps off the oppressive mood of the film a bit, and one can really feel that these are the parts that led to Elephant Song becoming a movie. It has about half an hour of stuff that’s as compelling as any filmed play, surrounded by an hour and 20 minutes of passable filler. ■