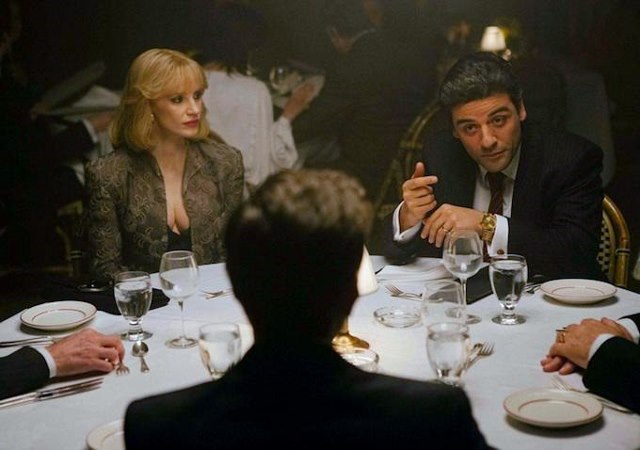 A lot of the marketing around J.C. Chandor’s A Most Violent Year seems to position it as heir apparent to The Godfather or even Scarface. It’s an NYC-set period crime drama that also happens to star Oscar Isaac, an actor who periodically bears a striking resemblance to Al Pacino. Besides those superficial similarities, however, A Most Violent Year has very little in common with the rote classics of the gangster genre. Its protagonist isn’t really a gangster, and despite the title there’s very little violence to speak of on-screen, and none of it is perpetrated by the titular character. A Most Violent Year is a slow-burn drama about the creeping inevitability of being in over your head and the ways in which one can change in order to prevent it. It doesn’t have Isaac mowing people down with machine guns, and it’s all the better for it.

Abel Morales (Isaac) is the owner of a prosperous heating-oil company he’s built from the ground up with his wife Anna (Jessica Chastain) and accountant Andrew (Albert Brooks, unrecognizable with long, straight white hair). Abel has always given his fellow immigrants a chance to get a leg up in the world, and he’s about to close a $2-million deal on a new waterside property that will expand his business tenfold. The heating oil business is fierce, however, and an unknown competitor is routinely jacking his trucks to steal his product. The robberies come to the attention of Lawrence (David Oyelowo), the local DA who’s had an inkling for years that Abel may be cooking the books and working in less-than-total legality. With charges about to be brought against him, Abel learns that his loan from the bank is a no-go with only a few days left to the transaction, forcing him to look for quick cash in unsavoury places.

What separates Abel as a protagonist from the more iconic characters he’s been compared to is his almost complete lack of menace. He’s a slick salesman and a convincing businessman behind closed doors, but his threats and shakedowns are met blankly by his competitors. He’s a businessman who’s gotten too big to stay legitimate; his operation is big enough that it can be ripped off painlessly, and his determined belief in his own power of persuasiveness is his own worst enemy. Compared to his more cunning, ruthless wife, he’s downright harmless but steady in the belief that he can solve things by talking it out to little avail.

Chandor sets the film almost entirely in decrepit steelyards and nondescript, slate-coloured industrial neighborhoods of New York that recalls Sidney Lumet’s unfussy ’70s work. His New York of 1981 isn’t one of neons and hightops but rather of sensible, brown double-breasted suits and non-descript cars. The soundtrack is free of Hall & Oates and other easy period signifiers, but it nevertheless feels authentic. Like much of the film, it has a restrained grit and sense of realism that anchors its slow, steady decline into the inevitable.

If the film has any flaws, it’s that its insistence on slow-burning drama and its stubborn avoidance of clichés neuters some of the supporting performances. Chastain plays the impulsive, ball-busting id to Abel’s more measured character, but since letting her loose means playing into the clichés of the genre, she disappears for long stretches of the film and never gets to take the character to its logical conclusion. In the same vein, Oyelowo is the ostensible villain of the piece, yet his role remains mostly functional and low-key. Its studious avoidance of tropes is its greatest asset, but also the thing that hurts it the most in the long run. ■