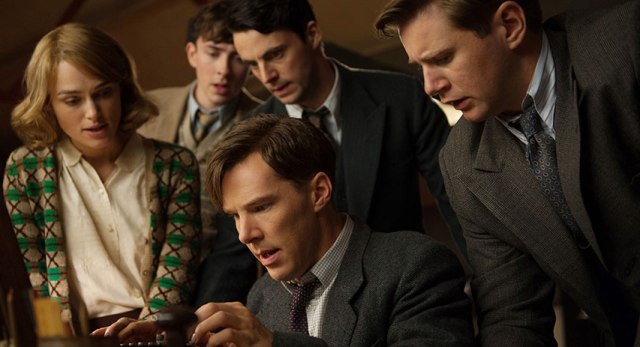 The problem with making a film like The Imitation Game is that, while most people should know who Alan Turing is, they do not. In order to make Turing’s life palatable to a mass audience that probably has no clue who he is, it has to fit into a convenient narrative. People’s lives never work on three-act structures — we all know this. It’s precisely because Turing was such an important and narratively rich figure that The Imitation Game is a resoundingly conventional bit of Oscar bait. He’s so fascinating and yet so unknown that the filmmakers cannot trust anyone to fill in the blanks themselves. It’s a slick, professionally put-together piece of work that nevertheless suffers tremendously for its inability to colour outside the lines even a little bit, or to let audiences figure things out for themselves. In order to understand the Alan Turing that the movie is putting across, you have to be fed every little bit of information.

The year is 1939. Great Britain is at war. The British government has managed to secure a version of Enigma, the machine the Germans use to encode their communications. Brilliant young mathematician Alan Turing (Benedict Cumberbatch) is called to join the cryptography department; despite his brusque and off-putting ways (these days he’d fall somewhere on the autism spectrum), he joins a team of the U.K.’s best to attempt to crack the Nazi code. Their first methods aren’t terribly effective — they input random series of numbers by hand, and Turing judges that it might take them around 10 million years to crack the code at that rate. After a personal endorsement from Churchill himself in order to become the head of the project, Turing goes to work on a complicated machine he calls Christopher that automatically inputs sequences without the use of manpower. This Turing Machine effectively became the first ever computer.

There are two important things to note about Turing, two things that defined his life above all else: he was a brilliant mathematician who invented the idea of computing as we know it, and he was a homosexual at a time when Britain punished such inclinations with jail time or chemical castration. In telling the first, The Imitation Game mostly glosses over the other. It’s true that the film is first and foremost about Turing’s achievements in the field of science, but his arrest in the 1950s for solicitation (not to mention his engagement of convenience with a fellow scientist played by Keira Knightley) also defined the course of his life, and it’s impossible for the film to totally ignore. Instead, it’s used as the bedrock of his entire being, an already profoundly eccentric man rendered even more complex and troubled by the fact that he can never truly be himself. The Imitation Game does not pretend that Turing was not gay, but it uses his homosexuality in such a utilitarian way (constantly flashing back to a childhood story of unrequited love with a classmate named Christopher) that it ends up feeling disingenuous.

The Imitation Game is also a victim of acute biopic-itis, carefully hitting every goalpost of troubled genius you could imagine: the scene where he’s fired only to have his fellow scientists quit in protest; the scene where a fleeting glimpse of a straight relationship leads him to realize (and admit) his homosexuality; the scene where something completely unrelated leads him to a breakthrough in the experiment and he runs halfway across campus with his confused coworkers in tow. Turing was by all accounts a brilliant and complex man but the film world he inhabits is a simple and accessible one full of easy shortcuts that ends up strangely resembling the lives of other brilliant, troubled men.

These are flaws because they’re familiar, but they’re familiar for a reason: they work. More than anything, though, The Imitation Game works. It’s witty and compelling in all the right places. It’s accessible enough to make complicated mathematical matters not only understandable but exciting (and I hate math). It has a real sense of urgency and danger as people die while these scientists putter around with equations. It’s a terrifically effective film in a lot of ways — formulaic, sure, but those ingredients have been weighed and calibrated down to the single grain.

The film wouldn’t work without Cumberbatch’s performance, either. He manages to find humanity where the film throws a bunch of tropes together. He’s essentially playing disabled without ever leaning on this disability or letting it define his portrayal. Turing stammers and he gets flustered and he’s almost completely incapable of understand jokes or figures of speech, but that’s not who Cumberbatch is playing. He’s playing a brilliant, driven man who happens to be all of these things. It’s an incredible characterization in a film that never assembles much of a character out of Turing, preferring to stitch together bits of biographical info instead.

The Imitation Game is a lot like another middlebrow success from the last few years, The King’s Speech. It shares its British sensibility, a metric shitload of tweed suits and a certain affably stuffy demeanour. Much like The King’s Speech, it’s a perfectly pleasant film that colours within the lines and offers no surprises. Come Oscar time in March, I have no doubt that it will sweep up and I have no doubt that five years from now, there will be whining about how something else was robbed. It’s so formulaic and calibrated that its own success and inevitable backlash is written in the stars. ■

The Imitation Game opens at the Cineplex Forum (2313 Ste-Catherine W.) on Friday, Dec. 19