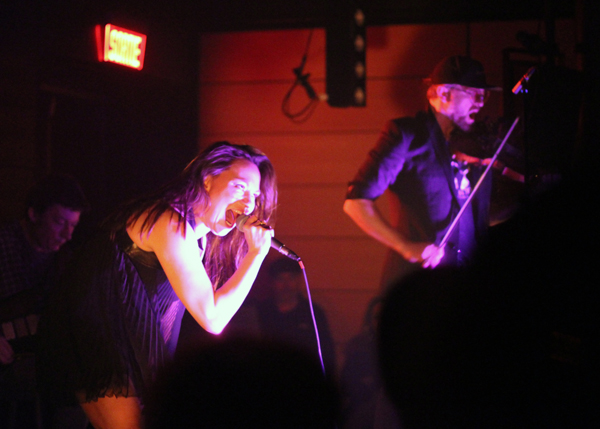 Tanya Tagaq with Jesse Zubot. Photos by Lisa Sproull (scroll down for more)

Tanya Tagaq assured the sellout crowd at the Phi Centre Saturday night that she’d have the freedom to “get crazier” if she didn’t have to worry about appearing on YouTube later. As the audience dutifully put away their cell phones, the Inuit throat singer and 2014 Polaris Prize winner introduced her band for the Montreal show, whom she herself had only met earlier that day. Tagaq was true to her word; we were in for a crazy, largely improvised performance that would seem to be fuelled by the molten core of Earth itself.

Tagaq’s latest album is called Animism, in reference to the view that everything that exists contains a spiritual force, from humans to animals to weather patterns to sticks and stones. Watching Tagaq perform, you believe this must be true, because she not only rouses those energies, she pulls them into her and sets them on fire before driving them back out at the audience in a furious tempest of pure elemental expression.

Her performance is urgent, challenging, emotional and sensual, with a raw energy that’s extraordinarily powerful. She communicates almost entirely without words, telling stories of struggle and survival, fear and determination, sex and violence with a spellbinding array of guttural growls and vocal cries, all the while animating the journey with her entire body as she reaches to the sky with outstretched hands and collapses into a heap on the floor throughout her unbroken 45-minute set. Towards the end, she grasps the mic in both hands, slowly rising on her knees as she growls out the only two words expressed during the performance: “manifest destiny.”

Tagaq is part of a new generation of aboriginal artists who are changing the way Canadians understand the relationships indigenous and non-indigenous people have with each other, our governments and our environments. After being in the news recently for a number of outspoken statements on topics ranging from the Canadian seal hunt to missing and murdered indigenous women, Tagaq may be better known to some for her politics than for her art. Though her style may be unappealing to those who like their music to be melodic or pretty, she has created an entirely unique body of work by bridging the traditional with the contemporary that’s worthy of every bit of attention she’s received since her Polaris win.

If you weren’t able to catch Tagaq’s show at the Phi Centre, you can get a taste of what she’s about by checking out her performance at the 2014 Polaris Prize Gala held on Sept. 22, archived here. ■