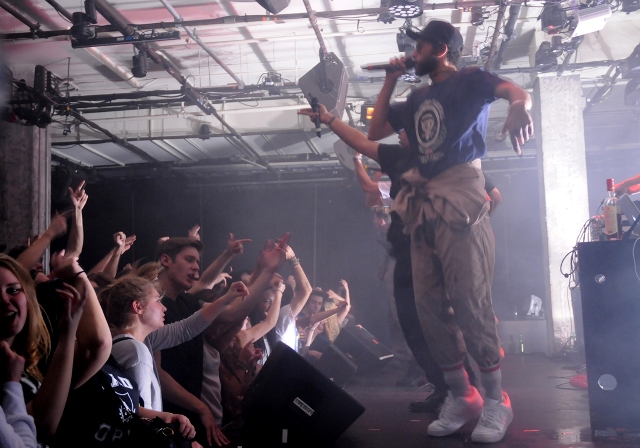 This had all the earmarks of a “show-of-the-year” calibre party, on paper. A sold-out, hometown rap show is a rarity in the city, so making it count seemed like an easy enough proposition. The fact that one of the hottest bands from the ROC was is the building was not the sell so much as a value-added bonus to an already promising package. But alas, things were not as perfect in the flesh as they were in the mind’s eye.

Not to say it was a bad show by any means. The bands were, by and large, in good shape. A moody opening set from the Posterz capitalized off the early energy of the crowd to start things off with raw rap wildin’.

By comparison to the rest of the bands to follow, the Posterz had less of their own fans and more early arrivals to entertain, so if it was difficult for them to get the momentum of several high-voltage, engaged moments with the audience off the ground for keeps, they fought the good fight with grace and high spirits and ultimately did a great job, no doubt winning over a good portion of the first-timers in the audience.

LLA kicked it up a notch. More people crowded to the front, more comfortable call-and-response, more moshing and hands in the air – it’s  obvious that these dudes are really kicking into high gear with the release of Blue Volvo last month and the queue of mental Quebec shows they’ve recently annihilated by all accounts.

So far, so good, right? What am I complaining about, then?

The problem lies in the unshakably showcase-y vibe of M shows at large. It’s not even that there were huge gaps between performances or anything like that, but it comes back to a word I’ll use again: momentum. As soon as one act would finish, there occurred a seismic shift in the crowd — fans to the front, drinkers to the bars, smokers to the street, repeat. That’s typical of any multi-act bill, but at this show it took the steam out the engine every time it happened.

It’s not as if the festival is disorganized, or even, as I have lamented in the past, too “industry,” in this case. But M had a party on their hands and knew it, and it’s almost as if that party was never quite allowed to start. Add to that the sudden, surprise buzz that Arcade Fire’s Win Butler would be DJing at the event’s unofficial after-party…at 1 a.m…literally in the middle of the actual event itself. Though this may not have been an executive decision by M directors, it didn’t do the showcase any favours to be outdone by its own after.

Also, a consistent, engaging host might have made a difference, with no diss intended to fest founder M for Mikey, who came out to intro at least one act. But really, DL Jones or someone like that might have really saved the night, despite how great the bands themselves were.

Dead Obies entertained the fuck outta the crowd, and after they left the stage a palatable anticipation for BBNG’s live assault began to mount in the room, but it was too late. It already felt like what could have been the show of the year wouldn’t even be the show of the weekend.

I left halfway through BBNG’s admittedly gorgeous set. The thrill was gone. I have no doubt they and Tommy kept the crowd dancing until lights-on, but I personally couldn’t quite make another comeback. ■