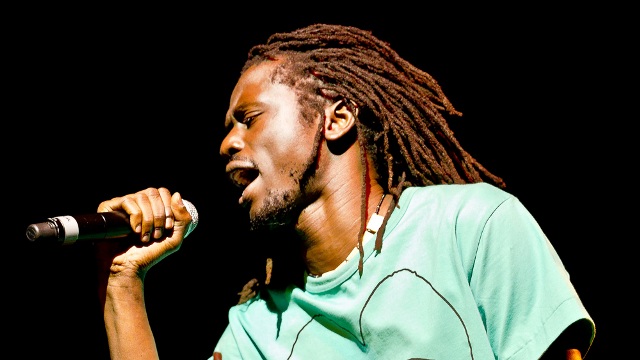 A former child soldier kidnapped and trained to fight at around age seven or eight in his native South Sudan, actor/author/hip hop artist and human rights activist Emmanuel Jal has certainly come a long way.

Now residing in Canada, Jal stars opposite Reese Witherspoon in The Good Lie (by Quebec director Philippe Falardeau), a survival story not too far off the mark from his own real-life experience. With a fifth studio album, The Key, out since September, featuring collabos with Nile Rodgers and Nelly Furtado, among others, Jal speaks and performs this Saturday at the Phi Centre.

Infinitely more poignant with his words that I could be in describing his past and present, Jal consented to correspond by email in advance of his engagement this weekend.

Darcy MacDonald:  Where were you when you first heard the sound of hip hop music? Could you understand the words, and whether the answer is yes or no, how did hip hop speak to you?
Emmanuel Jal: I was in Kenya (and) I didn’t like it at first, but there were a lot of young people who were into it. I was into African music. It took a while for me to get into it. When I did, I decided I want to hear more. That’s when (I found) the Lost Boyz, Tupac, Bad Boy, MC Lyte, Queen Latifah , Run DMC, MC Hammer, Bone Thugs and the Kenyan MCs like Kalamashaka. I think my talent discovered me when I was around 20 years old.

DM: How does it still speak to you? How has your fan relationship to hip hop culture changed or evolved, with 10 years as an active artist under your belt? And how has it remained the same?
EJ: Music speaks to me today. This is where I become a child again, and in writing, it’s the place I get to see heaven again. Music is my painkiller to push the day.

I think (in) the music audience, people are looking for different things and it also depends on the generation as well. The old-school hip hop is still the best, but to the young audience that didn’t connect with the old-school, they may argue differently. Hip hop as a form of art has envolved, it’s adapting to any new sounds that comes across at the moment. Hip hop is the modern day opera; it’s the modern day rock.

DM: You often say in interviews that music can reach people in a way that other art forms cannot; that it appeals to multiple senses and therefore speaks in several ways to the listener.
EJ: Well, music is a universal language, it’s the language that the body understands. If you put children of different backgrounds (together) and play any type of music, it will speak to them the same message that the sound is telling them. Music in itself can make you scared, make you brave, it can make you cry, it can make you laugh, it can make you dance, and depending also on the lyrics, it can influence you in different way. It can make you hate or love. Music can speak to your heart, your mind, connect your soul with your spirit. It can speak to your legs, your bump, your nose.

DM: But do you ever feel that activism through music can be like preaching to the choir?
EJ: Activism through music depends on the artist; the creativity differs. If you look at Bob Marley, he was an activist, but his music was entertaining at the same time, preaching love and unity. If you look at Tupac, he was a social, political, hardcore activist (and) he was entertaining. Youssou N’Dour and Baaba Maal to Juliani in Kenya — they are activists.

Preaching to the choir still encourages and empowers people so a form of energy is transformed into a huge spotlight that, when put in darkness, the evil would perform less and that same light can give hope to those walking in the darkness. When artists get their message across, they get a type of joy that makes them want to keep writing and keep performing. When their messages don’t get across, they face challenges — some could give and some may take the challenge, and keep trying until they get it right. For me I will keep trying — I don’t know when the perfect song is going to come.

DM: If you could make privileged western children of any ethnicity or cultural background understand one thing about what you survived as a child, what would it be? What can we begin to try to better understand, to help make a difference?
EJ: What I do is I just share my experience for social, emotional learning, and because I believe the human story is powerful. When an inspirational story of survival is told, it opens people’s hearts, souls and spirit to connect. From there, people can discover their purpose, their calling. Most human beings don’t like to be told what to do, they just want the information; from there, they can choose  what  to do with it.

What I propose to tell a young  person now is that the adults have run out of ideas to make our world better so they are relying on you to fix the future. We will be gone and you’re going to be here, so learn everything you can and be like the humming bird, a story heard from the indigenous Canadian: A forest was on fire and a little bird made a choice to act, to look for water and try to put the fire out. The rest of the birds kept asking the little bird, “What are you doing?” The little bird replied,  “This is our home and I’d rather die trying than watch it burning down.”

To the adults, [I’d say] the worst people on Earth are not those who commit atrocities, it’s the people who bury their heads in the sand, the people who are turning a blind eye and deaf ears — they’re the worst ones. Each and every person has to play a part to make our world better — planet Earth is our only home. There is no other place that has been discovered outside our solar system that can sustain humans, and the greatest threat to us being extinct on this planet is ourselves. We are polluting the air, we are poisoning the land that takes care of us and we’re creating more and more wars. We have nothing here that will save us, expect us.

DM: Tell us a bit about your new album, The Key.
EJ: The Key album is about children’s rights, women’s right and human rights. It’s also just basically about having fun, too, ’cause it is entertainment. ■