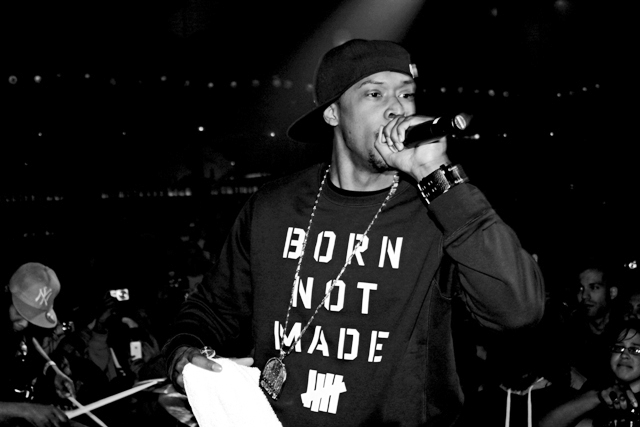 If you don’t give the drummer some, Detroit, MI rapper and production stalwart Black Milk might just step up and snatch the whole kit.

The Montreal crowd favourite returns to Cabaret Underworld tonight. With a new album out next week, Black, who cut his teeth as something of an understudy to J Dilla, touched base with Cult MTL via email to talk high profile collabs, his live sound and the evolution of his signature hip hop style.

(And if you’re bummed not to have tix for the sold-out Flying Lotus show around the corner, trust me: go to this instead.)

Darcy MacDonald: So to start, I wanna list a few artists you have worked with and please tell me how the collab came about, why you were into it and what you learned, took away or otherwise remember/like about it.

Black Milk: 1) Danny Brown: I met Danny cause he was on the scene in Detroit around 2008. Collabing with him for the first time on my album, Album of the Year, which turned into us working on the EP, Black and Brown. Right now he’s probably one of my favorite MC’s out there, and there’s definitely some more work to come.

2) Jack White: Working with him was an experience that was a totally different experience than working with anybody else in my career. For one, just be becuase not just the level of fame he has, but his musicianship. Him calling us to come work in Nashville and me bringing my band to work with him and his musician friends, and just jamming out we came up with a couple of tracks. Him allowing me to just direct the jam session and produce music was great, and also to perform at his Third Man venue out in Nashville was cool.

3) Nat Turner (Black Milk’s live band): That came from me working with the artist Ab around Tronic era, where he played on a few of the records. He already had his own band back in D.C., and he wanted to take a more live instrumentation approach to my music and live show. Me working with him is kinda how that came about, and they ended coming on the road with me and Ab’s been rocking with me ever since.

DM: No Poison, No Paradise was a challenging listen, in a positive way. It did not bang us over the head with simple soulfulness or well-honed parlour tricks. And it has a hella dark side even by your standards. Did that album separate the “listeners” from the “fans,” to you, based on the critical reception?

BM: I feel like that album was me reinventing myself, whether for the fans that already knew about my catalogue beforehand or if you weren’t that familiar with my music, you were kind of introduced to a version of Black Milk that’s totally different from what I started out with. It’s a more personal album, a more conceptual album. So I think it was, more so, me reinventing myself as an artist, and definitely as a writer.

DM: How has your live show grown with the release of each album and what can we expect from this show?

BM: It’s just been a natural progression, because playing with the band for four to five years your chemistry gets stronger and stronger with each project and each show. So it’s a level of musicianship where we’re definitely in a place where I can kinda consider us seasoned artists. I feel like we’re on a certain level of professionalism as musicians where there’s not really any crowd we can’t rock. All this time we’ve spent together, we’ve developed a skillset for being able to rock an audience.

BM: The new album If There’s a Hell Below is coming out Oct. 28. I’m about to jump into a Random Axe album with Guilty and Sean Price. For the next year or couple of years, I’m gonna try to focus more on production and beats versus solo rap albums, so over the next year or you’re gonna hear some different artists over top of my production. ■