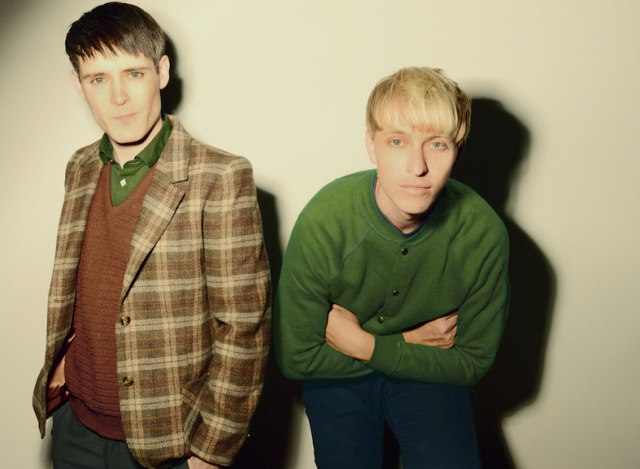 The Drums‘ 2011 record Portamento was practically perfect. Building on the buoyant pop of their self-titled debut, the band upgraded the sonic finesse and tightened up the writing, producing some of the best pop songs of the 21st century, under the influence of the Smiths and Joy Division, the Beach Boys and the Ronettes.

With Encyclopedia, the Drums has scaled down to its core duo of Jacob Graham and Jonny Pierce, old friends from northeast Ohio and upstate New York, respectively, who met in bible camp and shared a dream of escape into musical history. The band that was once routinely mistaken for British has embraced more American muses, like the Pixies, and crafted pop songs with a side of dissonance.

I spoke to the duo last month, about making the record, losing dead weight and surviving school.

Lorraine Carpenter: I understand that the writing of this record began in a cabin the woods. Why did you choose this setting, and did it work for you?
Jonny Pierce: We knew that we needed to escape from the city, to just kind of shake things up a little bit. We have a habit of never doing the same thing twice, from a geographical standpoint. It’s nice to check out different spaces when you’re being creative — you never know what will happen. Jacob and I are both pretty influenced by our surroundings, and sensitive to that.

So we drove upstate about five hours out of the city, to this cabin in the middle of nowhere, and we set up a makeshift studio for a weekend and wrote a few crazy songs. I think that influenced the record in an indirect way. One of the last songs we wrote was “US National Park” and that song may not have been written had we not set the tone by going to this pine forest a year and a half before.

Jacob Graham: Everyone in Brooklyn was growing their hair long and trying to be hip and we wanted to stay in a cabin in the woods get all super-foresty, park-ranger Americana. 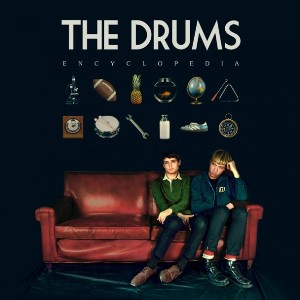 LC: Did being a duo have a major impact on the style and sound of Encyclopedia, or has the songwriting always been handled by you two?
JP: We started out as a duo, and there were a few songs from our first EP [Summertime] that were getting a lot of attention around the world, and we realized, “Oh God, we’ve got to put a band together,” ’cause people were asking, “When are you playing shows?” We hadn’t even thought about playing shows at the time; it was more of a recording project, recording songs that were important to us. So we put a band together and, maybe prematurely, got them heavily involved in all the aspects of the band. We made a couple of records, and for one reason or another, they couldn’t handle the lifestlye of touring constantly, pretty much, as we do. So they left, and it’s back to me and Jacob, and what seemed like a handicap at first, very quickly we realized it was actually our key to freedom. We felt like we were let out of jail, being back at our square one.

Jacob and I have been in each other’s lives for 15 years and we click on so many levels. There’s not a lot of discussion going on; we set the ground rules for each record and then we go for it. We both instantly recognize when something’s great and when something could be improved or when something’s just a no-go.

It’s exciting! There are things on this new album that seem a bit ridiculous, but we’re able to be ridiculous, and there’s nobody dragging us down, making sure that we’re up to the hip and cool standards of now. We’re allowed to just be crazy again.

LC: Nice. So the September issue of our newspaper is the Student Survival Guide — I’m wondering, how was school for you guys? Amazing? Hell?
JP: Actually, Jacob and I were both homeschoooled most of our lives, though at one point Jacob went off to public school and I went to a private Christian school where they taught Creation instead of evolution. So I don’t know — I just wanted to get out of there. I had my eyes set on New York City and being in a band.

JG: Jonny’s experience and mine were pretty similar. We both knew early on all the things in life that we wanted to do, and in a way school was just this annoying thing that got in the way.

JG: Yeah, clearly. So we’re just a couple of dum-dums, but we learn new lessons every day. ■