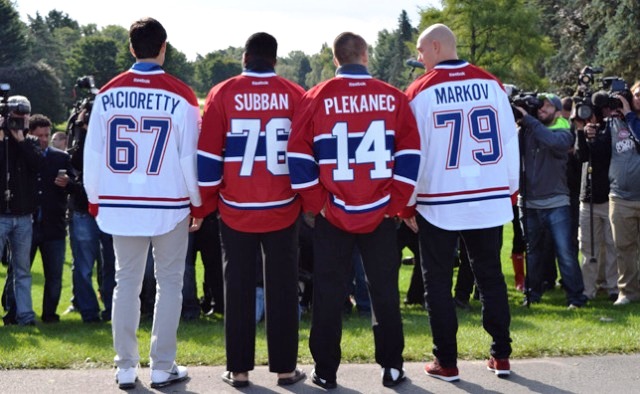 No C for the CH: Depending on how you look at things, either everyone or no one will be captaining the Montreal Canadiens this season. The team named two permanent assistants: veterans Tomas Plekanec and Andrei Markov, the longest-serving Habs, and two alternates, young bucks P.K. Subban and Max Pacioretty. The last time the Habs had no captain, in 2010, they reached the conference finals.

Jury duty: The jury for Luka Magnotta’s trial is just about set. They’re still looking for an alternate, and have moved the trial start date from Monday to Wednesday. No joke: The 14th juror selected works at a butcher shop.

Ay non: Scotland voted to stay in the United Kingdom, not only breaking the hearts of proud sons Sean Connery and Andy Murray (neither of whom live there anymore), but also a cluster of Quebec sovereigntists who crossed the pond to observe the referendum. Poor PKP, Alexandre Cloutier, Daniel Turp and Societé St-Jean Baptiste president Maxime Laporte — hope they enjoy their highland vacations.

Sprucing up Cathy’s: Montreal’s most iconic west to east street will be getting a facelift, one that will include more trees and shrubbery, as well as wider sidewalks. They’re also floating other ideas around, like making Ste-Catherine a two-way street. Either way, the major repairs to the street’s water pipes from Atwater and PDA begins in 2016, so expect a lot of orange before the green.

Also, on Sunday is the People’s Climate March, taking place in cities across the world, including Montreal at 1:30 p.m. at Parc Lafontaine. It’s expected to be the largest-ever demonstration for doing something about climate change. ■