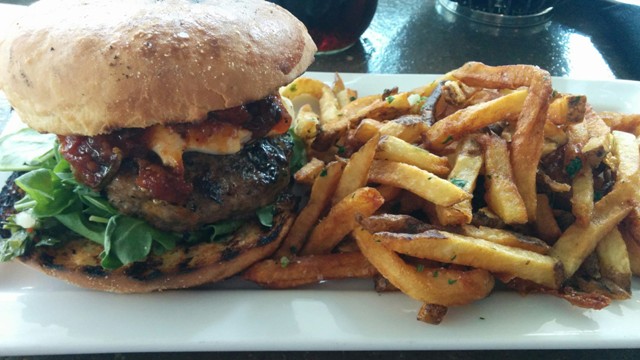 The Hamburguesa Patagonia from l’Atelier d’Argentine

Le Burger Week is in progress, but only for two more days!

To see all 47 burgers competing this year, go here.

And here are some helpful reviews to steer you to (or away from) some of the event’s exclusive creations:

Although nothing has ever been written in stone, the brief history of Burger Week has almost exclusively seen participating eateries try to pull out all the stops by tinkering with ingredients and fixings. What better way to separate yourself from the pack than with a patty made from meat other than beef or topped with fancy garnishes?

The evergreen Uniburger is about as unpretentious a burger as there is, so it’s understandable that for this competition they would simply stick to their winning recipe rather than overreach. They must have thought, “why mess with what works?” Before realizing: “If one is good, more must be even better.”

The result is the elegant 4×4, which as you might expect quadruples the patty and cheese count. It’s not as excessive as it sounds: the
patties are smaller than the norm, so it really just feels like a larger version of the original rather than some teetering testament to
beefy hubris. The cheese is velvety, gleaming and has a bright, yellow hue. The meat and cheese have been increased concurrently, so instead of throwing off the burger’s delicate ecosystem, the upgrade feels manageable. It can also be eaten normally without losing its form. The 4×4 comes with pickles and Uniburger sauce (which merged with the cheese), and bacon can be added.

Uniburger’s latest concoction should appeal to both burger snobs and burger slobs. It might not win the contest because it lacks
showmanship, but it’s also delicious and sensible enough to warrant a permanent spot on their menu for exceptional hunger-related
emergencies. (Erik Leijon)

L’Amère à Boire’s Boileau is the only featured burger this week to use deer meat. Lean and flavourful, the venison patty was perfectly complemented by an ample helping of a gently sweet strawberry chutney. Adding to the mix were slices of Morteau sausage, smoked high in the French mountain air, and cheddar and mayo prepared with stout beer and IPA, respectively. Rich and satisfying without being too heavy, the earthy and outdoorsy Boileau burger is the perfect dish to fuel your next adventure into the urban wilderness. (Lisa Sproull)

There’s always reason to be cynical about a ringer being airlifted onto the Burger Week battlefield. The burger is a working man’s delicacy, and while the event is about showcasing how openly the dish can be interpreted, it seems almost unfair to pit a classy Old Montreal resto against a street fighting greasy spoon. Luckily, l’Atelier d’Argentine captured the accessibility and spirit of the week without compromising its own identity.

The Hamburguesa Patagonica is light and loaded with spices that stay on your palette long after the last bite. The highlight is the lamb and rosemary patty, perfectly crumbly and not stingy with the latter ingredient. The ground lamb was rosy and moist, and melted in my mouth. For toppings, the caramelized onions provided sweetness and the goat cheese made it a little more robust. The main condiment was a homemade tomato jam, which looked and tasted like sun dried tomatoes. The bottom part of the brioche bun did not stand to scrutiny, so consider resting it upside down to avoid a breading break. The burger came accompanied with fries.

What struck me about the burger is how sympatico it is with the rest of l’Atelier menu of visually stunning dishes. It didn’t look out of place next to a chicken milanesa or cornish hen, and I didn’t feel silly ordering it while everyone else was going for more traditional courses. (EL)

This burger was described to me as both a “pork patty” (by the Burger Week website) and a “pulled pork burger” (by the waiter) — weirdly enough, it’s simultaneously neither and both. The patty is made of ground and shaped smoked pork, so it doesn’t really fit the generic BBQ idea of pulled pork, but it doesn’t exactly taste like a beef burger either. Mixed in with bacon and cheese, the patty has a nice heft without feeling like a comically oversized joke burger. The smoked lettuce (!) and mushroom sauce (which is actually just fried mushrooms in a sort of BBQ sauce) add a nice steakhouse element to the meal as well. The bun is described as being “apple and cheddar brioche” but I have to say it seemed like a regular burger bun to me. Apart from its elements being a little over-sold (a trend I noticed within the rest of the menu as well), les Enfants Terribles’s burger is quite solid. (Alex Rose) ■

See details about all 47 of Le Burger Week’s burgers here.