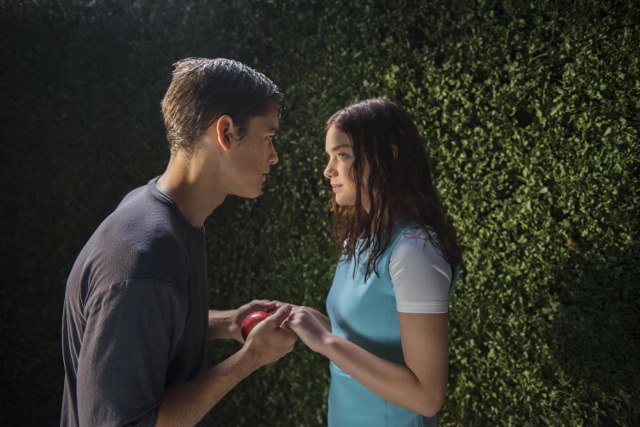 The Hunger Games series and its knockoffs owe a lot to Lois Lowry’s The Giver, the Newbery Medal-winning 1993 novel that helped kickstart the popular young adult (YA) dystopia genre. So why does the movie adaptation of The Giver ironically feel like a knock-off itself?

It should work. After Bill Cosby, of all people, relinquished the rights to option the film, Jeff Bridges fought passionately for 18 years for the book to come to the silver screen. The final product has gotten the thumbs up from Lowry. It stars heavy hitters Bridges and Meryl Streep. The narrative is inherently cinematic, propelled by the protagonist Jonas and his mentor the Giver’s ability to “see beyond,” and observe the world in colour and with emotion.

Unfortunately, a lot has happened in 18 years. Bridges wanted his father Lloyd Bridges (who passed away in 1998) to star as The Giver, and directed him in the role for a home-video adaptation — now Jeff is old enough to play the role. The Giver is a victim of its own success as an inspiration. The recent overload of YA book adaptation blockbusters is surely responsible for The Giver movie being finally greenlit, but that also ensures that it’s a has-been on arrival.

Instead of emphasizing the innocent wonder and horror that, seen through the eyes of a 12-year-old boy, sets The Giver’s story apart, director Phillip Noyce (Rabbit-Proof Fence, Patriot Games) has been forced to repackage it into a more marketable mix that allows for romance and action. Jonas (Brenton Thwaites) is now an 18-year-old appointed by the dictatorial Chief Elder (Meryl Streep) of his sterile, egalitarian and crimeless community to be the Receiver of Memory (during a ceremony that somehow seems cribbed shot-for-shot from Divergent). These memories of the past before the building of the Community are transmitted to him by the Giver (Jeff Bridges). Soon, Jonas begins to see his Stepford family (Alexander Skarsgard, Katie Holmes, Emma Tremblay and some amazingly camera-ready baby responsible for some of the best “acting” in the film) and friends (Odeya Rush, Cameron Monaghan) in a new light. Taylor Swift also shows up (thankfully for only a few minutes) as a holograph playing a holograph piano.

The joys here are fleeting and visual. The community looks appealing, with its ’60s-era Modernist design, and the film, beginning in black and white, effectively allows colour to seep in as gracefully for us as it does for Jonas. But like the world Jonas tries to escape, and unlike the book it’s based on (still contentious enough to be frequently banned), the movie is hollow, plodding along with each element leading clearly to the other until a dull, neat ending.

The novel is pulled forward by a mystery, a constant striving towards the knowledge just beyond the young protagonist’s grasp and understanding. Here, the philosophy is instead made redundant and Jonas depicted blandly; his rebellion seems incidental. Even the high-tech action sequences are boring, verging on laughable.

The first of us to read The Giver as preteens might now have similar-aged children of their own. Take them if you want some A/C. This is a fine “summer break with the kids” movie, but it won’t be a perennial seller or a modern classic — unlike the book that inspired it. ■

The Giver is in theatres now