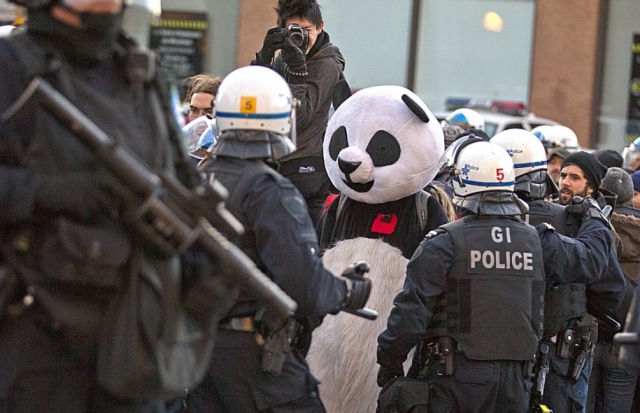 Class-action in session: Protesters who were detained by police during the 2012 student protests will have their day in court. Quebec’s Superior Court is allowing a class-action lawsuit by those who where arrested to go through, and if the case is ruled in the kettlees’ favour, the City of Montreal could be forced to pay out millions.

Hall pall: Speaking of protesting, city employees who ran amok and made a mess at a city council meeting recently to protest pension
changes will be facing criminal charges.

Smelling Time Station: The Gare d’Autocars at Berri-UQAM typically reeks of bodily fluids and cafeteria food, but this morning, it was the stench of pepper spray that forced people out of the bus station.

One for the road game: Remember during the playoffs last season, when the Habs hosted a massive viewing party for a road game at the Bell Centre, and then dive magnate Peter Sergakis complained to the liquor board that the Montreal Freakin’ Canadiens didn’t have the right licences to sell booze during non-game nights? Well, the liquor board sided with the Habs, saying that because l’incontournable Ginette Reno sang the anthem live, it was a real event after all. Lesson: Don’t mess with Ginette.

Extended swim: It’s going to be a scorcher next week. As a result, the city will be keeping a few pools open beyond the usual Labour Day weekend closing date. So hold your breath, kick your feet and move your arms around. For a few more days, anyway. ■