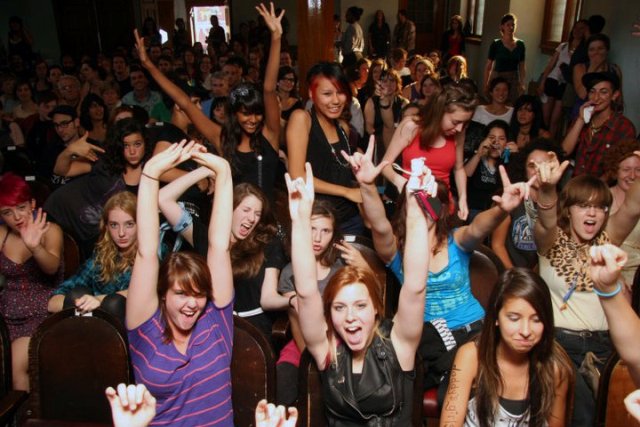 If your travels have taken you past la Sala Rossa this week, you might have noticed the walls shaking a little harder than usual during the daylight hours. That’s because 37 teen and pre-teen girls, accompanied by a host of dedicated volunteers, have been learning to make their mark in the music scene during the annual Rock Camp for Girls.

Now in its sixth year, the week-long event is a project aimed at teaching girls aged 10–17 how to play instruments, write original songs, handle music gear and put on a performance, all in one week. Musical instruction and practice time is peppered with lunchtime performances by local bands, and workshops on topics like media literacy, critical thinking, gender expression and stereotypes, and the history of women in rock, all from a feminist and anti-oppressive standpoint. The camp is inclusive for all individuals who self-identify as female, or who are gender non-conforming.

The Montreal Rock Camp is part of the Rock Camp Alliance, a U.S.-based network of affiliated camps, each run independently, while sharing network support and best practices. The original Rock Camp for Girls, held in Portland, Oregon in 2001, has served as an inspiration for dozens of new Rock Camps that have cropped up all over North America and elsewhere.

Why the need for a Rock Camp just for girls? While at first glance it may seem that women have achieved unprecedented levels of success in the music industry, with all-female bands like Haim and Savages taking centre stage, and major stars from Beyoncé to Miley Cyrus identifying as feminist, scratch below the surface a little and it becomes clear that women still face barriers in their road to self-expression. In a widely publicized op/ed piece in The Guardian last year, Chvrches frontwoman Lauren Mayberry spoke candidly about her experiences dealing with sexism, and a recent piece in Clash Magazine calls on the music industry to can it with the misogyny already. In this kind of environment, it can be an uphill battle for women to be taken seriously as musicians who can play their own instruments, carry their own gear and operate their own sound board.

Andrea Kornacki and Heather Hardie, coordinators of this year’s Rock Camp, are themselves familiar faces in Montreal’s music scene. When I ask if the Montreal scene is a welcoming place for women to be involved, Hardie describes her experiences when starting out:

“I’ve played in various bands for about 10 years or so, starting in Halifax and then moving here. I found that when I was first starting, it was difficult to navigate. Maybe I wasn’t as aware of it as I am now, but I realized how often men would make comments like ‘You’re pretty good for a girl,’ or ‘You need help carrying that?’ and that kind of thing. You deal with that all the time and it almost feels normal, but when you think about it, that’s not normal! That’s actually pretty fucked up!”

The organizers behind Rock Camp for Girls want to help create a new normal, and make sure that girls feel comfortable picking up instruments, making lots of noise, and finding their place in the music scene. Rock Camp provides a model where women and girls are doing exactly that.

Campers don’t need any previous musical experience to come to camp. “The idea is that they see that it’s possible to learn an instrument in one week, to pick up an instrument and write a song,” Kornacki explains.

“Campers are taught by women, and their band coaches are women, and they see women doing the gear and the sound, women coordinating, doing all the logistics, and leading workshops. Those are spaces both for volunteers to gain leadership skills, but also for campers to see what it’s like to take on leadership roles, and that there is a place for women there as well.”

Hardie adds, “The ultimate goal that we’re working towards is that we should feel comfortable entering these spaces and these scenes. That’s what Rock Camp is aiming for, to make girls feel empowered to do that, and to know their gear… to feel good about what they’re doing and just do it.”

It’s remarkable just how quickly the campers begin to feel comfortable with their instruments and their voices. According to Kornacki, campers are often shy at first. “But then,” she tells me, “over the course of the five days, you just see them open up, you know… open up personally, but also take on this instrument. Often on the first day, the drummers don’t want to be too loud, or the guitar players are playing super quietly, but by the end they’re just rocking out!”

The camp is proving so popular that organizers are finding creative ways to grow the project to allow more programming year-round. One new initiative this year has been to establish an after-school program with a choir. Eventually, the coordinators would like to expand this program to also include instrument instruction, like the summer camp. Kornacki explains that it’s difficult for some of the campers to continue their musical journey outside of the camp, where instruments and gear are available for their use. “They need access to jam spaces and equipment. It’s trickier for youth.”

While the organizers may not have all the resources they need to provide as much programming as they’d like to at the moment, there’s no shortage of community support among musicians and stakeholders in the Montreal scene. From their partnership with la Sala Rossa, to Hotel2Tango’s Howard Bilerman recording the campers’ songs each year, to support from organizations like CKUT and the Girls Action Foundation, and local businesses such as Drawn & Quarterly, Phonopolis, Bodkin Tattoo and Annex Vintage, to enthusiastic involvement by a multitude of local artists and musicians, Rock Camp for Girls has grown into a large, tightly knit community. Many campers return year after year, and some of the original campers are now young adults who have come back to volunteer at the camp.

Discussing the community that’s grown around Rock Camp, Hardie tells me, “In some ways we built our own little network of musicians. When I think of all of our friends who are in bands, they’re all in some way affiliated with Rock Camp, or we’ve met each other through Rock Camp, or at Rock Camp fundraisers, or that kind of thing. It’s definitely a community that is interconnected, and I feel like now it is a safe space for the most part, for us as musicians. It’s completely different from what I experienced when I first started out!” ■

Get involved in or support the Rock Camp for Girls here. Financial support is always needed, as the organization is completely self-funded. The camp’s Indiegogo campaign runs until July 31.