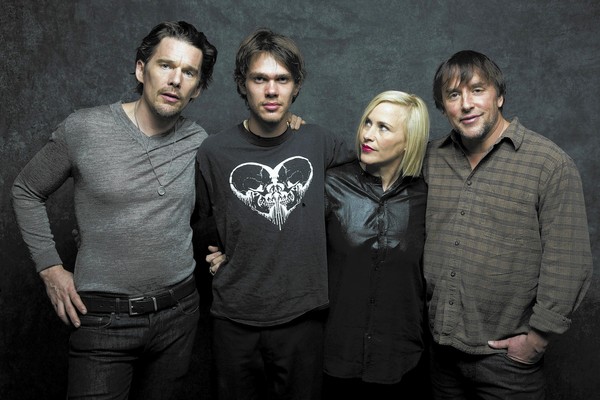 The cast of Boyhood with Richard Linklater (right) at Sundance 2014. Photo by Jay L. Clendenin

Jerry Seinfeld and Larry David famously wanted Seinfeld to be “a show about nothing,” but Richard Linklater really makes films about nothing — and everything. His best films —Slacker, Dazed and Confused, the Before Sunrise movies and his new movie Boyhood — are as heavy on dialogue as they are light on plot. Nothing much happens per se, but the theme is no smaller than life itself. I spoke to the director by phone shortly before the film’s Montreal premiere at Fantasia last week. As you’d expect, he was articulate, philosophical and laid-back in that Austin way as he discussed his unique creation.

In case you’ve somehow missed the buzz on Boyhood, it follows Mason (Ellar Coltrane) through 12 years of his life. Shooting annually, a few days at a time, over the whole dozen years, Linklater shows the boy growing into a young man in front of our eyes. It’s an amazing cinematic experience, though the concept at times threatens to overwhelm the story — especially when the narrative is, typically for Linklater, focused more on fleeting moments of depth and beauty than on a traditional “story arc.”

But the director insists that “the story came first. The whole process, the methodology, came out of a way to tell this particular story. It was a way to express my feelings about growing up, parenting and everything this movie is.”

Linklater admits that this process was at times intimidating in its uncertainty. “You’re taking on as a collaborator an unknown future, which is antithetical to most film people—we’re mostly control freaks,” he laughs. “You can have your hunches, your intentions, but the reality will be something else.” For instance, he points out, “at any time, Ellar’s parents could have said ‘We’re not comfortable with this, and we’re pulling him out.’ And we couldn’t have done anything about it. Luckily, they didn’t.”

Mason’s misguided but well-meaning parents are played by a couple of pros: Patricia Arquette is his overwhelmed single mom, while Linklater’s go-to guy Ethan Hawke is his flaky, quasi-deadbeat dad. But the casting of Mason, whose personality has to carry the movie, was Linklater’s most important choice.

“I talked to Ethan and Patricia first. They were in. But they’re adults, they know what 12 years is. A kid, that’s a whole ’nother thing.” Linklater says he just got a good vibe from the young Coltrane in the audition process. “He was the most interesting, the most mysterious. I liked the way his mind worked; you could have real conversations. A lot of kid actors are people-pleasing. Ellar didn’t care what you thought of him. He really didn’t!” Linklater laughs.

Linklater’s films are known to be highly naturalistic, but in fact his dialogue is very specifically crafted through lengthy rehearsals. I was curious to what extent he wrote as he went along, and how much was prepared in advance. As he describes it, it was a mix of both. “The last scene of the movie, I wrote it 10 years before. But the actual dialogue, I might have written 10 minutes before,” he says. “This film was the best of both worlds—highly structured, a specific story, but open to new ideas all the way through.”

One of the things that really stands out in the film is the realization that Mason’s generation is the first to fully grow up in the digital age. “If you’re that age, it’s been there your entire life,” says Linklater. “From the time you’re conscious, there’s always been that interconnectedness. And frankly, that’s what really demarcates the film to a large degree. When I think about growing up, it was the cars, the hairstyles, the clothes—but in this film, it’s really the technology that marks the passage of time. The design and fashion kind of look the same from the beginning to the end of the film, which surprised me. Maybe we don’t need that in the outer world because it’s happened in the technological world.”

Catching himself in this very Linklater-esque moment of free-wheeling reflection, the director chuckles. “Anyway, that’s my little 12-year observation.” ■

Boyhood is in theatres now