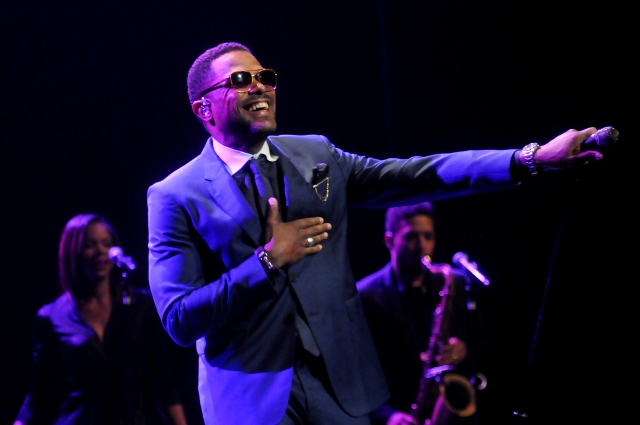 “I can smell the coochie sweat from up on stage. I’m just taking it all in,” an unrepentantly smooth Maxwell told a swooning audience at Place des Arts on Sunday night. “That’s right, I said that.”

Maxwell didn’t just innocently flirt with Montrealers at this year’s Jazz Fest — he had his way with us and made sandwiches afterwards. In support of no album in particular (his last one came out in 2009 and he’s got a new one on the way this fall), the Brooklyn-based R&B honey dripper was free to perform his finest lovemaking slow jams with a knowing smile. He’s well aware of his ability to give both men and women alike the vapours, and instead of shying away from his ungodly charisma, he revelled in it.

The dapper singer opened the show with two of his poppiest hits, “Sumthin Sumthin” and “Get to Know Ya,” and by the end of the latter, people were already dancing in the aisles. Beautiful, well-dressed people, for the most part.

After a couple of tracks from 2009’s BLACKsummers’night that showed off the chops of his Sade-esque backing band, the stage went dark. The vocal from Kate Bush’s “This Woman’s Work” then came on, which segued into his own famed cover of the song, his falsetto as achingly powerful as on record. He followed it with an extended version of “Lifetime” from 2001’s Now and “Fire We Make,” his collab with Alicia Keys. Maxwell even succeeded in making a performance alongside a computer-animated Keys more sensual than most real duets.

Maxwell is definitely in Sade’s realm when it comes to presenting love and sex as real lived-in experiences, which probably also explains both artists’ sporadic outputs. It’s impossible to have that slow-burning fire alight every night, but when it’s on — it’s on.

Almost as mesmerizing this weekend was Boundary drummer Chris Olsen during the group’s performance at the Musée d’art contemporain. Ghislain Poirier might be the leader behind the project, but on stage it’s Olsen that commands. His fluid drumming style seemingly should be incongruous with Poirier’s hard electronic sounds, but it instead added a level of depth and richness that wasn’t apparent on the album. Based on the new songs they performed (they were a three-piece at this show, with Dan Thouin on synths), Boundary’s second album promises to have something of a natural vibe.

On Saturday night at Club Soda, Toronto trio BadBadNotGood hosted what was likely the Jazz Fest’s wildest party. They’re a jazz group known for rap covers and rapper affiliations, but the show’s audience was made up of energetic young people looking to mosh and crowdsurf. They deconstructed some Flying Lotus beats with saxophonist Leland Whitty, did their popular take on Gucci Mane’s delightfully dopey “Lemonade,” and played faithful renditions of songs from their new album of all-originals, III. If the trio had any interest in changing the jazz game, they could certainly do it, but I don’t even think that’s what they’re trying to do — the modern mishmash and hard playing is simply what comes naturally to them.

Finally, a lot of Jazz Fest talk has been swirling around two legends – BB King and Aretha Franklin – and their poor performances. Should Jazz Fest organizers have known better, given even the most cursory of Internet searches would have revealed that BB King, at 88, can’t really play anymore? Probably, but how many Montrealers bought tickets to those shows simply because of name-brand recognition? Nostalgia blinders make people spend their money recklessly sometimes, and no one in the music industry is going to try and stop you. Montrealers might think they deserve better than the ramblings of an old man, but BB deserves better than to be trotted out by his handlers if he’s not up to it anymore. ■